WHO IS THE GIRL IN THE GLASS TOWER ? Elizabeth Fremantle

In advance of the publication of my new novel I thought I'd introduce my extraordinary protagonist, Lady Arbella Stuart.

Through her great grandmother Margaret Tudor, and as the nice of Mary Queen of Scots, Arbella had a strong claim to the English crown and was raised in the belief that she would be the heir of Elizabeth I.

In the final years of Elizabeth's long reign there was much covert political jostling to establish who would eventually take the throne. But the fear of being usurped meant that the ageing Queen refused to publicly name her successor. The nearest she came to doing so was to say of Arbella, 'One day she will be even as I am.'

Arbella's position as presumed, though unofficial heir, made her a potential focus for Catholic plots. Though she was raised a Protestant the prevailing fear was that she might be kidnapped and encouraged to convert whilst still young so the plotters could then launch a coup to place her on the throne as a Catholic puppet queen. For this reason she spent her youth in virtual imprisonment, cloistered away at the magnificent Hardwick Hall in Derbyshire under the strict rule of her ambitious grandmother Bess of Hardwick.


However the political climate changed irrevocably in the last year of Elizabeth's reign and it was Arbella's cousin James who eventually succeeded, leaving Arbella in political limbo. She was released from Hardwick and called to court but her royal blood made her at best a valuable bargaining chip on the royal marriage market or, at worst, a dangerous pretender to the throne. But Arbella refused to be held a fugitive at her cousin's court and made a courageous bid for freedom at great personal cost.

A remarkable, highly intelligent and complex woman, yet headstrong and deeply flawed, Arbella with her poignant and profound desire for freedom, fascinated me from the moment I first read about her. She was a prolific letter writer so it was easy to engage with her authentic voice and thereby build a sense of how she might become a character in The Girl in the Glass Tower.

In my novel I have claimed poetic license and woven Arbella's story through with that of the poet Aemilia Lanyer. Lanier was another extraordinary woman of the period, remarkable for being the first English female published poet.

Lanyer is sometimes cited as a candidate for Shakespeare's 'Dark Lady' but as I found no hard evidence for this I have not included it in the book. At age 18 she became the mistress of the Queen's cousin henry Hudson who was forty years her senior and thereby had an entry to court circles. Her groundbreaking, project was a long poem in defence of Eve and other misunderstood women and as a tragically misunderstood woman herself, Arbella fits well into Lanyer's scheme.

The actual link between the women is tenuous but Lanyer addressed a poem to Arbella and they may well have known one another at court. But it seemed to me apt to place these two women side by side in The Girl in the Glass Tower as their stories chime together.


READ AN EXTRACT ON THIS LINK

Tap. Tap. Tap on the window. 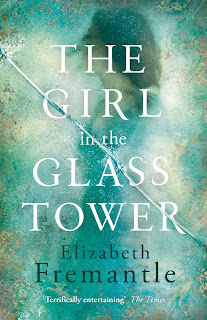 Something, someone wanting to be heard. Waiting to be free.
​Tudor England. The word treason is on everyone's lips. Arbella Stuart, niece to Mary Queen of Scots and presumed successor to Elizabeth I, has spent her youth behind the towering windows of Hardwick Hall. Her isolation should mean protection – but those close to the crown are never safe.

Aemilia Lanyer – writer and poetess – enjoys an independence denied to Arbella. Their paths should never cross. But when Arbella enlists Aemilia's help in a bid for freedom, she risks more than her own future. Ensnared in another woman's desperate schemes , Aemilia must tread carefully or share her terrible fate...

For those interested in reading more about Arbella's life Sarah Gristwood's excellent biography, Arbella: England's Lost Queen, is a must.

I don't know very much about Lady Arbella, and sadly nothing at all about Ms. Lanyer. I look forward to learning more about these forward thinking ladies in THE GIRL IN THE GLASS TOWER. Will it also be available in the US?