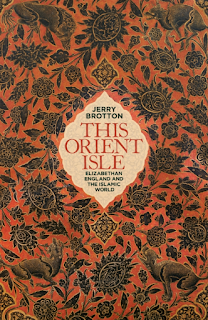 Just last week that wonderful, massive, all encompassing metropolis, London, elected its new mayor. Sadiq Khan is (quite a lot) younger than me but we do share some experiences. We're both the children of immigrants who grew up to know that London, a city that accepts all comers, is ours. He grew up a Muslim, attending mosque in Tooting,  South London, where people worshipped in a language that was not English. Just as I attended chapel in Finsbury Park, North London, listening to services in Welsh.

Khan's success has been celebrated as London's first Muslim mayor. To most Londoners that's something, rightly I think, to be proud of. To others, (I made the mistake of listening to a Radio 4 phone in over the weekend) it's the end of civilisation as we know it.

London has always been a city that soaked up the driven, the hungry, the ambitious, the terrified and the desperate for hundreds and hundreds of years.

And this lovely book is very timely indeed, even though it details events of  nearly five hundred years ago.

Jerry Brotton is a Professor at Queen Mary University of London. He has written a marvellous and very readable book, a little window on a tiny period in history, the late sixteenth and early seventeenth century. It details the links made by Elizabeth the First's court to the Ottoman Empire and the Morrocan Kingdom. For reasons of trade initially - the Persian silks and Turkish carpets, and Elizabeth's favourite, Moroccan sugar - and equally importantly the possibility of making an alliance against Catholic Spain and the Holy Roman Empire.
For a brief while late Tudor Britain fell in love with all things oriental. Elizabeth and Sultan Murad III exchanged diplomatic gifts and letters, Elizabeth was keen for little England to be recognised as a power of almost equal standing to Spain. And on London's streets the massive Ottoman Empire was a source of fascination as well as fear.

The Levant Company - a forerunner of the East India Company - sent traders to Persia and to Aleppo. The British court sent an envoy to Constantinople. (Un)Gentleman adventurers the Sherley brothers, boasted and lied and roistered their way round the Persian courts.

Of course prisoners were captured too and sold into slavery all around the Mediterranean. And some, most shockingly  'turned Turk' and converted to Islam. In 1577 a Norfolk merchant, Samson Rowlie was captured by the Turks and after  castration became Hassan Aga, Chief Eunuch and Treasurer of Algiers.

The Tudor stage was inspired too, and characters from the south and east peopled various plays. Not only Shakespeare's Othello written soon after the visit by the Moroccan ambassador al-Annuri, but Tamburlaine by Marlowe and a host of other now forgotten productions.  Moors and Turks and Persians crop up in many writings of the era by lesser known names and plays, now long forgotten.

But the relationship cooled and in 1601 Elizabeth issued an edict, just before the Moroccan ambassador made ready to leave. In this edict she complains of a great number of negroes and blackamoors which (as she is informed) are carried into this realm since the trouble between her highness and the King of Spain...'

As today, economic difficulties - bad harvests, lack of cash - made new and visible immigrants unwanted guests.  In her edict she said 'these kind of people shall be with all speed avoided and discharged out of this her majesty's realm'

She appointed a merchant to ship us all out, but of course it didn't happen. London was, as then, a world city. It was already far too late for sloppy attempts to pull up the drawbridge. Britain was already looking out to the East, and soon to the West as well. And travel, trade and ideas always go both ways.

Brotton's book is a great read and illuminates the impact of the Muslim world on late Tudor Britain, through trade and culture. I can't recommend it enough.

One more thing. Brotton talks about an unfinished play, a co-written piece by Shakespeare and other writers in 1603/4. It was called Sir Thomas More,  and was a dramatisation of the life of the famous Tudor Councillor.

Shakespeare wrote scene six himself, it's in his handwriting apparently, and in it there's  a powerful speech in which Sir Thomas takes to task London shopkeepers and citizens who have been attacking aliens and strangers and refugees in the May Day riots of 1517. The locals blame these people for taking their jobs. It's a wonderful illustration of how absolutely nothing changes.

Shakespeare, in the voice of More, tells the crowd to reject xenophobia. He asks the crowd what they would do if they were refugees -


Say now the king,
As he is clement if th'offender mourn,
Should come too short of your great trespass
As but to banish you:whither would you go?
What country, by the nature of your error,
Should give you harbour? Go you to France or Flanders,
To any German province, Spain or Portugal,
Nay anywhere that not adheres to England:
Why, you must needs be strangers. Would you be pleased
To find a nation of such barbarous temper
That, breaking out in hideous violence,
Would not afford you an abode on earth,
Whet their detested knives against your throats,
Spurn you like dogs, and like as if that God
Owed not or made not you, nor that the elements
Were not all appropriate to your comforts
But chartered unto them?What would you think
To be thus used?This is the strangers' case
And this your mountainish inhumanity.

This book sounds fascinating - thanks for the review.

That scene is in the Riverside Shakespeare(which also has The Two Noble Kinsmen). Must go and reread!

How fascinating! I'm always glad to hear that the world of the past was international, too..