Doing the salami and swallowing the toad - Michelle Lovric 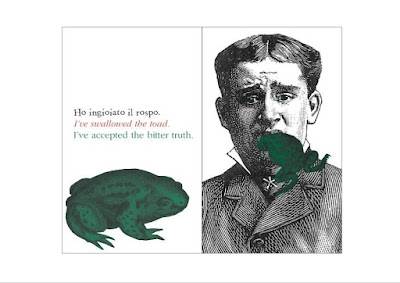 Every language is most alive in its idioms, and none more so than Italian, where everyday expressions are rich in colourful metaphor and hilarious visual images. Most of my novels are populated by Italian characters whom I write in English. All of us writing in this way face the same problem: how to convey the perfume of Italian-ness without silly pastiche. Similarly, when I write Irish characters, I have to rein in the 'Hong-Kong Paddy' of begorrahs and their kin and look for something deeper: the rhythm, the redundancy, the exaggeration that lends Irish English its charm.

With my Venetian protagonists, one of my tricks is to use Italian expressions literally translated into English, so that it makes sense, but hovers in the outlying region of sense ... that debatable land where you often find the poetry.

Below are some examples of the kind of expression that I like to use to show that my English-speaking Italian  characters are not at all English.

The expressions are shown in the original Italian and then in literal English translation, with an explanation of the actual meaning or the English equivalent expression underneath. The middle line is the one my characters use.


Sono contento/a come una Pasqua.
I am happy as an Easter.
I’m happy as can be.

Dormo tra due guanciali.
I sleep between two pillows.
I’ve got no worries.

Mi sono mangiato il fegato.
I ate my own liver.
I kicked myself. 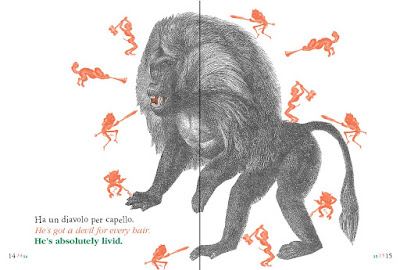 Spirito di patata.
The spirit of a potato.
No sense of humour. 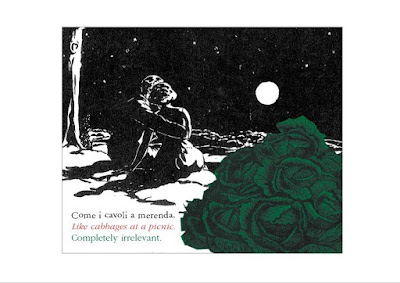 Io me ne faccio un baffo!
I don’t do a whisker!
I don’t give a damn! 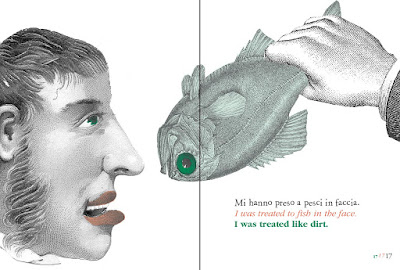 Non fare il salame!
Don’t do the salami!
Don’t act like an idiot!

Non ha sale in zucca.
He doesn’t have salt in the pumpkin.
He’s not very intelligent.

Ti salta subito la mosca al naso.
The fly really jumps out of your nose
You have a quick temper.


Fai di ogni mosca un elefante.
You make an elephant out of every fly.
Your make mountains out of molehills.

Ho una bella cotta per quella ragazza.
I have a beautiful cooked thing for that girl.
I have a crush on that girl.

Ho una scuffia per lui.
I’ve capsized over him
I’ve really fallen for him.

Lui mi fa sangue.
He makes blood in me.
He turns me on. 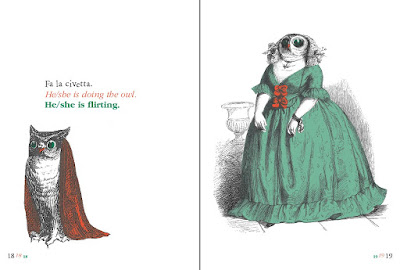 Faceva la santarellina
She did the little saint.
Butter wouldn’t melt in her mouth.

Ha mangiato la foglia.
He has eaten the leaf.
He’s onto us.

Lui mi ha preso in castagna.
He’s got me in the chestnut.
He caught me in the act.

Vado a lume di naso.
I am going by the light of my nose.
I’m hanging on by the seat of my pants

Mi sono cacciato in un ginepraio.
I have thrown myself in a juniper bush.
I’m really in a fix. 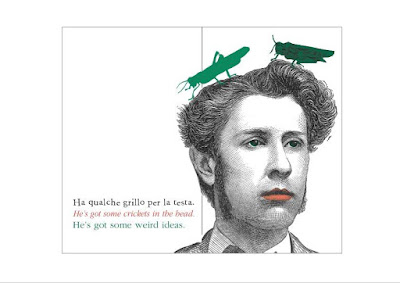 E costato troppo poco; deve essere farina del diavolo.
It cost too little. It must be the flour of the devil.
It didn’t cost enough: it must be stolen goods.

Sono rimasto con un pugno di mosche.
I was left with a blow-fly’s punch in the nose.
I was left empty-handed.

The images on this blog come from spreads I designed with Lisa Pentreath and Ornella Tarantola as a book proposal. We thought that visual aids would help settle the expressions into the brain. We all got too busy doing other things, which was a shame.

Here were the alternative covers 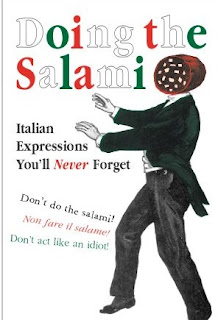 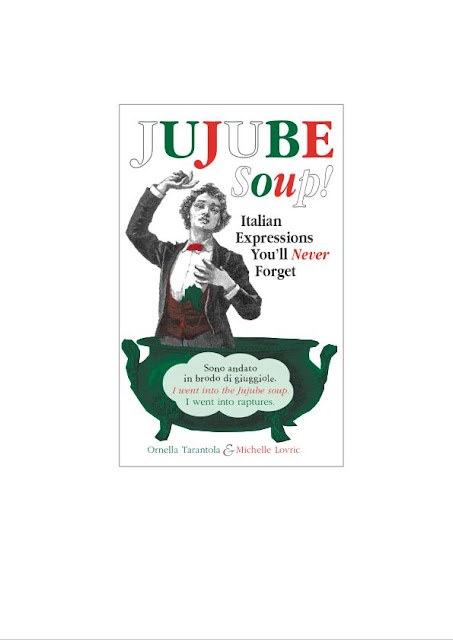 I am sure other History Girls and visitors to this site have similar useful expressions from other languages they speak and write. Do share!

I do this too! In one of the Stravaganzas Enrico says "that's something you see only wen a pope dies" = "Once in a blue moon."

I want that book! Any chance of a revival?

I love these expressions! Could you explain what you mean by "Hong Kong Paddy", though? I've never heard that one before.

I love these!! Thanks for sharing...

I offer all services which range from an unforgettable massage, wonderfully warm and loving GFE to a raunchy wild and deliciously naughty PSE- and everything in between.
http://no1hyderabadescorts.com/

I think someone in charge should be looking at the latest comments!