Another way of marking time, by Carol Drinkwater 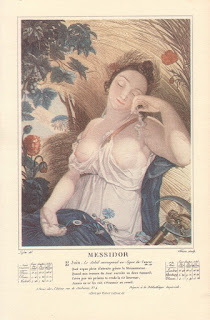 The month of Messidor, from the Latin 'messis', corn harvest.

Dates are on mind as this week as I have celebrated a big birthday. I was hunting about to see what of note in history occurred at around the same time as my birth. Instead, the internet led me to the Republican Calendar. (I am not that old!)

I have lived in France for over thirty years and I am ashamed to admit that I have only just discovered the Republican Calendar. Am I alone in this ignorance?

On the 6th October 1793, or 15 Vendémiaire, An II, the Convention decided to create a new calendar for a new Republic, fixing the start date as the day when the Republic was proclaimed, namely the autumn equinox, 22nd September 1792.

Months were made up of three decades (or thirty days). They year ended after Fructidor with 5 supplementary days and a 6th, Day of the Revolution, for leap years.

The French poet, Philippe François Nazaire Fabre, created names for the months. His inspiration came from the seasons and events in Nature. The Republican Calendar began its year in the autumn with the month of Vendémiaire. Vendage in French or vindemia in Latin is the grape harvest.
The names given for each month are really beautiful.

Names were also given to each day of the year and they were chosen from trees and flowers, plants, animals and farm tools.

Alas, Napoleon I who, of course, was not in favour of a Republic abolished this newly-devised calendar in 1806 and returned us to the Gregorian one. 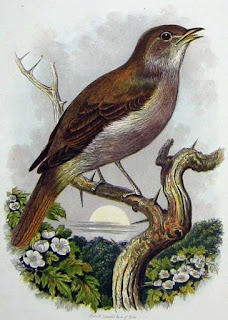 23rd April 2018, is quintidi (day 5) Floréal in the year of CCXXVI, celebrating the nightingale. Nightingale Day in the Flowering month of 226th year.

My birthday, 22nd April, was celebrating the hawthorn. I have taken these beautiful designs off their Twitter page, @sansculotides, so I hope I am not abusing any copyright.

A beautiful way to count the days of our life, eh?

I searched around to find any coverage of what should have been a BIG birthday party, Carol, and came up with nothing.
Anyway, Happy BIG Birthday! I turned 74 on the third of April. I am reading your third book of the Olive ones right now and have the next three arriving in the week to come. Such pleasant reading and it takes me away from small problems and helps keep me feeling positive! Thanks.

Congratulations on another milestone Carol! Hope you had and are having a wonderful time – and taking a leaf from Pongo Twistleton’s Uncle Fred’s book - proceeding to step high, wide and plentiful... as young as he feels, which seems to be a youngish twenty-two!
Conor and Maree, misquoting PG Wodehouse!