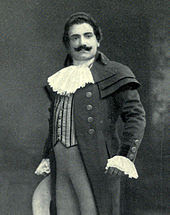 Puccini’s Tosca is one of my favourite operas and for many years I simply responded to the glorious music, accepting the romantic and melodramatic plot on its own theatrical terms. The photo above shows Enrico Caruso as  the painter Cavaradossi, Tosca's lover.   Tosca is set in Rome in 1800 and the novel I’m writing at the moment is set in Rome in 1805. Seeing the opera again recently, I wanted to know more about its political and historical background. Was there really a villainous chief of the secret police called Scarpia and an irresistible diva called Tosca? No, is the short answer, but the story of how they gathered enough imaginative moss to still fascinate us in the 21st century is an interesting one.

Puccini's grandfather, Domenico Pucccini, was in Naples in January 1799 to study with the composer Paisiello. He wrote a long letter to his father describing the chaos as the Queen, Maria Carolina, who had vowed to avenge the death of her sister Marie Antoinette, encouraged the massacre of all Jacobins and Republicans. "Here we are then in the most detestable anarchy, with everyone in mortal danger, especially we poor foreigners, who, if heard speaking differently, are immediately called "Jacobin" and given a shotgun "pill" in the chest—not the most pleasant medicine in the world." This is the same Queen who, in the opera Tosca, has asked the famous singer to perform at the Te Deum at the Palazzo Farnese to celebrate a great victory at Marengo. Later, news comes that Marengo was in fact a victory for Napoleon. In the opera, as in my novel, Napoleon is an invisible presence, seemingly invincible, who the characters argue over.

As well as these stories Puccini must have heard as a child, about the revolutionary martyrs who were burned and tortured by reactionary royalists, his opera is based on a play by Sardou, La Tosca. 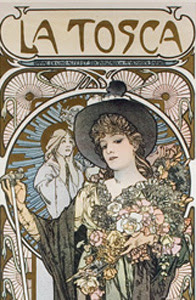 This was written as a vehicle for Sarah Bernhardt and became a huge international success in the late nineteenth century. Shaw despised Sardou’s melodramas, which he referred to as Sardoodledom, but audiences loved them. Sardou’s grandfather had been a barber in Napoleon’s army and for his grandson, as for Puccini, it was the revolutionaries who were admirable. In Act 1 of the opera Cesare Angelotti has escaped from the dungeons of Castel S. Angelo, the round building below, and is hiding in the church where Cavaradossi is painting.

Tosca herself, in both the play and the opera, is devout and disapproves of such wickedness as atheism and reading Rousseau and Voltaire. But, because she is passionately in love with the painter Mario Cavaradossi, she forgives his sinful politics. Tormented by jealousy, she follows her lover to Angelotti’s hiding place and Scarpia, of course, has her followed. Later, in the Castel S. Angelo, while Mario is tortured in the next room, she agrees to sleep with Scarpia in return for a safe conduct pass to take both Mario and herself out of the Papal States. Scarpia pretends to her that he will arrange a fake execution for Mario at dawn and then allow them to go free. As Scarpia bears down on her to demand his reward, Tosca stabs him.

Although Sardou’s play is far too long for modern audiences - at 5 Acts compared to the opera’s 3 - it does expand interestingly on the politics and motivation of the characters, and gives us a powerful feeling of the danger of the times We learn that Angelotti has been sentenced to three years in prison for possessing a volume of Voltaire and also, unofficially, for recognising Lady Hamilton, who he picked up as a prostitute in Vauxhall Gardens years before. In fact, the lovely Emma did play a most unlovely role in Naples during the bloody period following the restoration of the Bourbon monarchy. An intimate friend of Queen Maria Carolina, she had herself rowed out to watch a famous republican being hanged from the yardarm of his own ship. We also learn from Sardou that clothes were intensely political and could be a matter of life and death: if you wore a powdered wig and buckled shoes you were a royalist; if you had a beard or a mustache and plain dark clothes you were assumed to be free thinking and revolutionary.

Puccini’s opera has a rich historical background. Italy had long been divided into a number of small states, with the Pope in Rome ruling the Papal States in central Italy. After the French Revolution, in 1798, a French army under Napoleon marched into Rome, where there was no real resistance from the very unmartial Romans. The Pope, Pius V1, was taken prisoner and transported to France. where he died a year later at the age of 81. The short lived Roman republic was ruled by seven consuls and, in the opera, Angelotti was one of them. However, many ordinary Roman people hated their new rulers and mocked La Repubblica per Ridere ( the ridiculous republic).

Although the Pope was an absolute monarch the Church was generous to the poor. Very few Romans starved, and they did not want to be ‘liberated from slavery.’ Some aristocrats, including the Borghese family, were happy to compromise with the French. They were told to make a list of their valuables and anyone who opposed the Republic had all their possessions and property confiscated. Napoleon himself never came to Rome and soon found that he needed his troops in Egypt. So, after only a year, the Republic came to an end. As someone says in Sardou’s play, the French left Rome by one gate and the Neapolitans entered by another. Both armies looted shamelessly and many of Rome’s most cherished works of art, including the Apollo Belvedere and The Laocoon, ended up in Paris, in the new Muséum central des arts de la République in the Louvre. 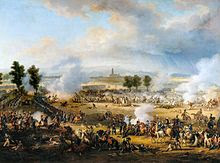 In May 1800 Napoleon once again brought his troops across the Alps to Italy and on 14 June his army met the Austrian forces at the Battle of Marengo., seen here in this painting by Lejeune. The action of both the opera and the play takes place immediately after this. For those who admired Napoleon, all this bloodshed and suffering was justified because Europe was regenerated.

As always, there is another point of view. The Catholic novelist Piers Paul Read has written a fascinating novel, Scarpia (2015) which is written with great sympathy for those who were loyal to the monarchy and the church. In his version of the same story, Scarpia is a decent, honest Sicilian nobleman who despises revolutionaries. At the end of Puccini’s opera Tosca, after stabbing Scarpia to defend her honour, finds that her lover Mario really is dead. She leaps heroically to her death from the battlements of the Castel S. Angelo, crying, ‘O Scarpia, avanti a Dio!’ ( O Scarpia, we meet before God).

I hope it is forgivable to reveal such a famous ending. At the end of Read’s accomplished novel, however, Tosca is confronted by Scarpia’s devoted friend, Spoletta:

“‘You vile whore,’ he shouted. What did you hope for? To escape? To claim a crime of Passion? An appeal to the Rota? A pardon from the Pope? Is that what you imagined?’

Then, “Spoletta took seven strides to the castellated ramparts, lifted her high above his head, and threw Floria Tosca over the wall.”

And so we storytellers play with fiction and history, often to the annoyance of professional historians.

I've seen the opera many times, due to Opera Australia repeating and repeating a lot of their productions, but it is a very good opera. And it has some stories around productions, such as the one about the diva who was supposed to fall on mattresses and instead found herself bouncing on a trampoline(she was not very popular!). Apparently, when Maria Callas did the role once, her hair(wig?) caught on fire from the candles. The actor playing Scarpia carefully patted it out and she worked it into the performance, with a contemptuous toss of her head.

It is indeed interesting to see what writers can do with stories by others!

How interesting to get these stories behind the opera! I must admit, when I went to the Emma Hamilton exhibition, I was put off her when I realised just how reactionary she was. But Nelson was pretty reactionary, so I suppose it's hardly surprising... Thank you for this.

Thanks for your comments. I forgot to mention that Sarah Bernhardt's famous wooden leg was actually the result of a mistimed leap from the battlements at the end of Sardou's play.