Our April guest is Katherine Roberts. Not only was Katherine one of the first History Girls; the book she talks about here, Bone Music, is published by The Greystones Press, the independent publisher set up by Mary Hoffman and her husband. Here is a photo that Katherine posed for on the occasion of the virtual launch of Bone Music and The Sword of Ice and Fire by John Matthews. 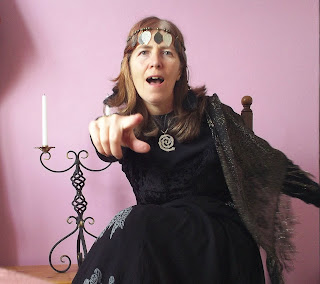 If that doesn't whet your appetite enough, here is a bit more about Katherine:
Katherine Roberts won the inaugural Branford Boase Award for her debut novel Song Quest (Chicken House/Scholastic 2000). Since then she has written many more fantasy and historical books for young readers, including the Seven Fabulous Wonders series based on the Seven Wonders of the Ancient World, and I am the Great Horse, telling the story of Alexander the Great from the horse's mouth. She lives in Devon and is currently a Royal Literary Fund Fellow at Penryn in Cornwall.
www.katherineroberts.co.uk

A recent study of the genetic legacy of the Mongols suggests that 1 in 200 males alive in the world today are direct descendants of Genghis Khan. If you consider the infamous Mongolian warrior lived well into his sixties and took several wives as was the custom of his people, who between them bore him 11 legitimate children, and that he no doubt sired an unspecified number of illegitimate children as he built an empire four times the size of Alexander the Great's, this is not as surprising as it first seems. So who were the women in Genghis Khan’s life, and what did they think of the small boy, originally named Temujin, who grew into such a ruthless conqueror?
The quotes below are from my novel Bone Music, which is in turn based on a 13th century Mongolian text known as The Secret History of the Mongols (Chinese: Yuan Ch'ao Pi Shih) that combines legend and history to tell the story of Genghis Khan's early years. 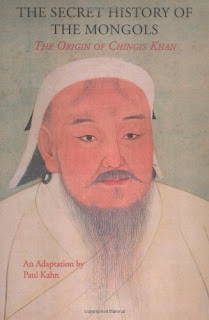 Bone Music ends when Temujin becomes Genghis Khan and ruler of all the people who live in felt tents at a large gathering of the clans in 1206. After that, he goes on to conquer many other people, from the Chinese Kin and Sung people to the east, the ancient Tanghut people of northern Tibet, and the Moslem kingdoms to the west as far as Hungary and the Mediterranean coast. Along the way, he took other wives to cement alliances:
Yesugen and Yesui  - Tartar sisters, who became good friends with Borta.
Ibaka - Kereyid girl, later given to one of Temujin's generals Jurchedei as a reward for service.
Gurbesu - Naiman girl.
Khulan - Merkid girl who accompanied the Khan on his western campaign.
Chaka - Tanghut girl.
Genghis Khan died in 1227 on campaign, possibly of sickness after a hunting accident when he took a fall from his horse. But there is another, more colourful, version of his death involving the wife of a Tanghut chief, whom he seized as spoils of war after killing her husband on his (second) Tanghut campaign.
Gorbeljin the Fair - Queen of the Tanghuts.
Ashamed that she has been violated by her people's enemy, she sends a message by bird to her father vowing to drown herself into the Black River. But first she washes herself until her beauty returns and shares Temujin's furs one last time, thus 'passing a mortal illness into his blood'. When the old Khan eventually falls asleep, Gorbeljin slips away and throws herself into the river as she has promised to do - although, in true legendary fashion, her body is never found. 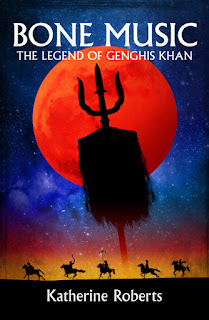 The novel sounds like one well worth reading. I assume it’s available in ebook?

Sorry for all the typos!

Thanks Sue, that's interesting. I guess if we go back far enough, we might find a lot of us are distantly related.

Yes, 'Bone Music' is available as both paperback and ebook.