I’ve just come back from seeing a 21st century production of a 19th century operetta by the late, great Gilbert and Sullivan.  The reason for my attendance at this event was because my oldest granddaughter, at university in St Andrews, was directing the show, so of course we went to support her, and had a thoroughly good time.  We were most impressed by the talents and professionalism shown by the cast and the small group of musicians, and felt that our granddaughter had done a grand job in this, her first, directorial role.  (Of course, we weren’t a bit biased!)

However, we couldn’t help wondering how relevant the story is today.

Princess Ida opened at the Savoy Theatre on 5 January 1884, the eighth of Gilbert and Sullivan’s fourteen collaborations.  The opera satirises women’s education and Darwinian evolution, which were controversial topics in conservative Victorian England, but Gilbert was also aiming his satire squarely at Women’s Emancipation. When Princess Ida was revived in 1926, The Times said: “It was after the fairies of Iolanthe had wrought havoc in the British Constitution that Gilbert turned to the companion task of showing how fatal it would be if women ever presumed to be anything but fairies, and cocking a cynical eye at Tennyson’s Princess, wrote Princess Ida, or Castle Adamant.”

The Times was right, in that the story is based on a narrative poem by Alfred, Lord Tennyson called The Princess (1847), written following the founding in the same year of the first college of women’s higher education, Queen’s College, London.  In 1870, when women’s higher education was still a radical concept, Gilbert wrote a farcical musical play, based on the poem, also called The Princess, and subsequently lifted much of the dialogue of Princess Ida directly from his 1870 farce.  However, Girton College, Cambridge, had been established in 1869, and by the time Gilbert and Sullivan collaborated on Princess Ida in 1883, the idea of a women’s college was no longer considered revolutionary.  Indeed, Westfield College, the University of London’s first women’s college, which had opened in 1882, is cited as the model for Castle Adamant, and certainly women’s higher education was very much in the news in London at the time.

Based, as several of Gilbert’s plots are, on misunderstandings, children married or affianced at an early age and brought up with no knowledge of each other, and a certain amount of cross-dressing, mistaken identities and so on, at first sight Princess Ida would seem to have little relevance to the world of today.  (Mind you, some of Shakespeare’s plays, such as Twelfth Night, involve similar problems, so maybe we shouldn’t blame Gilbert too much!)

It is hard to tell the story of Princess Ida simply, but I will try.  The story concerns the young Prince Hilarion, who was married at the age of one to Princess Ida, a few months younger than he.  Since then they have never seen each other, but now Hilarion is 21, his father, Hildebrande, insists that it is time he claimed his bride.  However, when Ida’s father, Gama, arrives with his three sons, he tells Hildebrande that Ida has forsworn the world of men and formed an all-female university at Castle Adamant.  Indeed, he says, “No men are allowed within its walls, and it is so feminist an establishment that although the ladies rise at cockcrow, every morning the crowing is done by an accomplished hen”.

Naturally, this being G&S, Hilarion and his friends, Florian and Cyril, decide to break into Castle Adamant dressed as women and impersonate female students, hoping to persuade Ida to change her mind.  Princess Ida is intrigued by these three “new students” and feels a strange connection with Hilarion.  However, Florian’s sister Psyche recognises them and explains the philosophy of the university to them: namely, that women are superior to men and should rule the world in their stead.  But having by now taken a fancy to Cyril she promises to keep their secret, and warns them to avoid Lady Blanche, who originally helped Ida form the university but now wishes she was in charge herself.  Then Melissa, Lady Blanche’s daughter, arrives, discovers their secret and falls in love with Florian, so that when Lady Blanche sees the boys and guesses their secret immediately, Melissa convinces her that if she helps Hilarion to gain his love, Ida will leave Castle Adamant to marry him and leave the university to Lady Blanche.  This is music to Lady Blanche’s ears, so she agrees to help the boys.

But just as all is about to go well, Hildebrande arrives with his army and threatens to kill Ida’s father unless the princess agrees to marry Hilarion.  Ida refuses, and rousing her students to fight the male invaders, declares that she will die before she will be Hilarion’s wife.

As the army lays siege to Castle Adamant, Ida prepares her students to fight them, but soon discovers that the girls are not too keen on the idea of fighting all these young men.  She is distressed by her students’ betrayal of all she has taught them, so when her father, Gama, and her three brothers arrive, Ida agrees to allow them in. 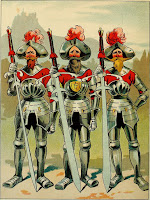 Her three foolish brothers, having just removed their armour as being too heavy and uncomfortable, challenge Hilarion, Florian and Cyril to a battle to decide Ida’s fate, but are roundly defeated.

Hilarion then makes an emotional appeal to Ida, pointing out all he has learned about women and marriage during his time at Castle Adamant, and declaring his love.  Moved, Ida admits that she does love him, so she accepts him as her husband and, along with Psyche and Melissa, leaves the university, leaving a delighted Lady Blanche to rule over Castle Adamant.

It remains one of Gilbert and Sullivan’s less frequently performed operettas, but retains much of their perennial charm.  However, I do wonder what Gilbert would have thought of it being performed by students of both sexes at a mixed university!

I had a little chuckle at the cross-dressing of the men, to gain admission to an all-female institution. With gender identity issues so much in the news, perhaps it's more relevant than you think!

You could be right, Michelle Ann!