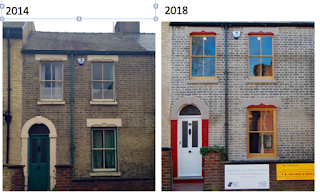 On a windy evening in March, I went to hear the latest about the progress of the restoration work at the David Parr House. The meeting was held at the Ross Street Community Centre in Cambridge, just round the corner from Gwydir Street, where David Parr and his family lived. The photograph above shows 'before and after' views of the exterior and they demonstrate very well how much has already been done.

Readers of this blog may remember an earlier post http://the-history-girls.blogspot.co.uk/search?q=David+Parr+HouseI wrote on this blog.  I saw the house just before it was due to close for restoration and was struck by its beauty and the fascinating history that was preserved in it.

The David Parr House has been lucky. Elsie Palmer, David Parr’s granddaughter, moved in to keep her grandmother company after Parr’s death and lived there continuously till she left in 2012. Her daughters, Rosemary and Ann, are still involved with the restoration work. To have a personal link of this kind, to have this sort of continuity in relation to the house is something very special. There’s an anecdote we heard about Rosemary, which told of how she’d trained her guinea pigs, harnessed to little carts, to follow her to the shops, and I added this amazing fact to many others this house contains.

The most astonishing thing, to me, is this: that a man who’d spent all day working for his employer, Frederick Leach, painting and decorating in many different locations should come home and spend his available leisure time painting all over again. I’m very grateful that he did, but it’s extraordinary when you stop to think about it. We are also lucky that he was someone who kept meticulous records, so that it’s easy to see every stage of this process. We also have many of tools he used for the work.

Those in charge of the preservation and restoration are clearly cut from the same cloth as David Parr himself. One thing that became clear from both Tamsin Wimhurst’s and Jane Phillimore’s presentations was the enormous care and diligence that was involved in packing up every single thing in the house and labelling it and putting it away for later unpacking. 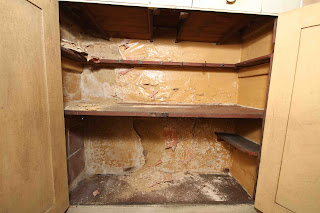 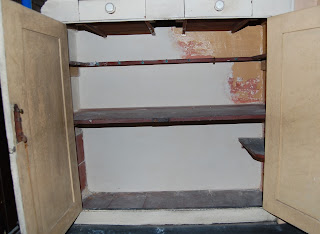 The second thing that struck me, as Jane showed us slides with fascinating recipes (some involving goats' hair) for the right kind of plaster and details of the paint colours and so forth, was that the Trustees have been employing workmen with whom David Parr would have been quite comfortable: proper master craftsmen in their fields who understand that this house needs the most tender care if it’s to continue to provide interest and pleasure to future visitors. 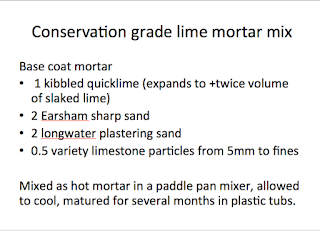 [recipe for mortar mix above]

This was a talk about the Dirty Phase of the process of preservation: repointing the brickwork, stripping damaged wallpaper, making sure that the plaster was right, matching paint colours as closely as possible to the originals, and dealing with every kind of problem in many ingenious ways. 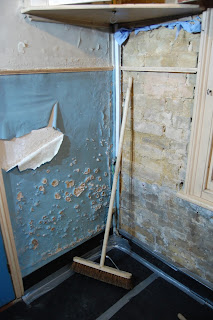 [the kitchen as it was above] 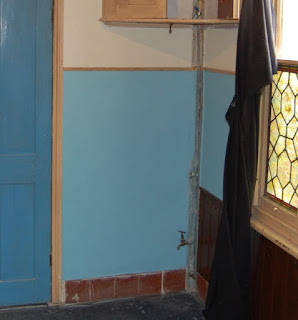 [the kitchen replastered and painted]

We owe everyone involved an enormous debt of gratitude and when the David Parr House opens again, the work of those who’ve overseen the restoration along with the present-day painters and decorators and plumbers and carpenters will be there for all to see alongside David Parr’s own amazing paintings.

I can’t wait for that day, but till it comes, such enjoyable and informative talks as the ones we had in Ross Street the other night are a good way of keeping up with the progress on the David Parr House.  And the website is a very good one and will provide a great deal of additional information for anyone who'd like it.

I love seeing and hearing about homes that managed to miss the modernisation, we have one near me called Mary Ann's cottage, where Mary Ann lived her whole life and on her death it was found to be exactly as it would have been when she was born, this is now a charitable trust and run by volunteers, if you ever come to John O'Groats then stop at Dunnet and Mary Ann's for s taste of the past. http://www.caithnessandsutherland.com/mary-ann-cottage-caithness-croft-museum/