Where the Living Meet the Dead: The Capuchin Monastery Catacombs - By Anna Mazzola 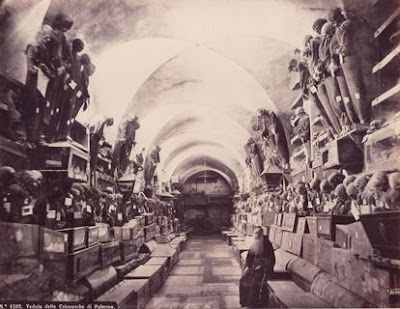 Once you’ve had your fill of gelato, cannoli and palazzi, you can descend from the dusty streets of Palermo into the cool of the Capuchin catacombs.

There, hanging from the walls, lying on shelves, sitting on benches and staring out from coffins are, it is said, nearly 8,000 corpses. Those on view are almost all clothed and in various states of decomposition, most mere skeletons, some still with remnants of skin and hair. One sports a fine waxed moustache.

The catacombs were created in the late 16th century when the Capuchin Monastery outgrew its cemetery. When the friars exhumed corpses from the overflowing charnel house to transfer them to the new cemetery, they found that something incredible had happened: forty-five friars had been naturally mummified. Their faces were still recognizable.

To the Capuchins this was clearly an act of God. Instead of burying the remains, they decided to display the bodies as relics, propping them in niches along the walls of their new cemetery.

The first body to be housed in the catacombs was that of Fra Silvestro da Gubbio, who is still greeting visitors today, holding up a sign commemorating the date of his burial (16 October 1599). 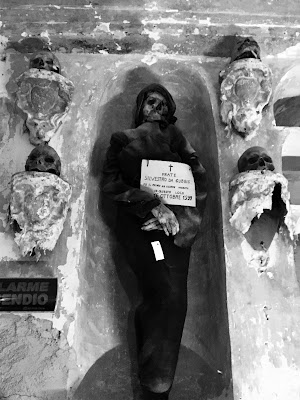 From monks to celebrities

Although the catacombs were intended to be exclusively for monks, dead priests and nuns were soon muscling their way in. Later, prominent locals paid to be buried in the catacombs and the passageways were expanded to make room for more lay people.

From the seventeenth to the nineteenth century, thousands of wealthy citizens paid for the privilege of being on eternal display on the walls of the underground cemetery. Mummification became a status symbol, a way to preserve dignity even in death. What had begun as the Friars’ private cemetery became a sort of museum of death. 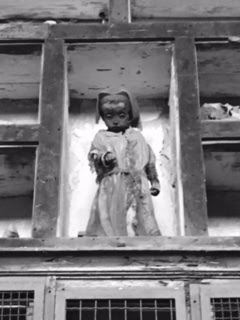 The particularly dry atmosphere allowed for the natural preservation of the bodies. Initially, priests would lay the dead on shelves and allow them to drip until they were depleted of bodily fluids. A year later, they rinsed the dried out corpses with vinegar before re-dressing them in their best attire and allocating them to their designated room.


The skeletons have been arranged according to gender, occupation and social status. There's a row of religious figures, a row of professionals, a room for women, a room for infants, and a chapel for virgins. Soldiers are preserved in their dress uniforms, priests in their clerical vestments. Families wear the fashions of their era – 19th century bonnets, 18th century gowns. 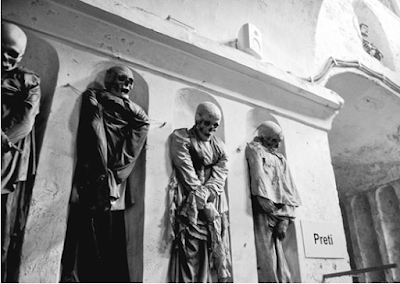 The cemetery was officially closed in 1880. However, there are two more recent arrivals. The first, in 1911, was the body of Giovanni Paterniti, Vice-Consul of the United States. The second, in 1920, was Rosalia Lombardo, who died and was embalmed aged two. She is so well preserved that she is known today as the ‘Sleeping Beauty.’

All in all, a thoroughly unnerving experience. I recommend it. 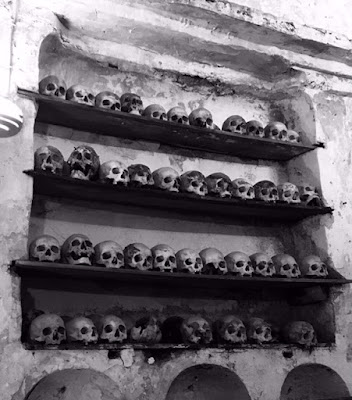 Anna Mazzola is a writer of historical crime fiction. Her first novel, The Unseeing, was published in 2016. Her second, The Story Keeper, will be out in July.
https://annamazzola.com/about/