My Mother's War, Part One by Susan Price

My mother was nine when the War broke out and like my father and his sister, she was never evacuated, though with my mother’s family this was probably due as much, or more, to a general lackadaisicalness. My mother was the pretty little red-headed youngest of six with two much older sisters, and three older brothers. As they all left school and started work at the earliest opportunity, all of the others were working when the War started, including her widowed mother. (My mother’s father died of lung cancer when she was four.)

I've recently seen it said that ‘before the Second World War, women didn’t work outside the home.' Nonsense. My maternal grandmother, like all the women in my family, always worked. For one reason or another, they had to. My maternal grandmother started work at ten and just carried on. She might have changed her job when the war started, if there was an opportunity for better wages, but she didn’t suddenly decide to go out to work 'to do her bit.' Children had to learn to cope being on their own — and doing a lot of household chores — at a young age.

None of my mother’s older siblings went to war. This was the industrial Black Country: they all had protected occupations. One of my uncle’s was in ‘Dad’s Army’, the Home Guard, and was issued with a gas-mask. The only time he ever wore it, my mother said, was when he sat on a low stool and put it on to terrify the dog, which ‘went yampy.’

It was a rackety household. My mother often told me that she never knew who was going to be in the house when she got up in the morning. Her brothers and sisters brought their friends home all the time and the kitchen might be crowded with people drinking tea and eating breakfast after coming off a night-shift.

She once came down to find a monkey in the kitchen. One of her brothers had won it at the Oldbury Wake (a fair.) As soon as my Grandmother came home, the monkey had to pack its bags. Poor thing.

It was Mum’s three older brothers who were supposed to construct their Anderson shelter. The instructions were to dig a hole at least four foot deep (a little over a metre) to put the shelter in, and to pile earth over the roof.

My paternal Grandad, George Price did this. He was a keen gardener anyway and used to digging. My aunt, his daughter, tells me that the family spent many nights in the cold, damp shelter, her wearing her siren suit, her mother knitting and her father reading. A miserable, boring experience it was.

About a mile away (but as yet unaware of each others' existence), my mother’s brothers started digging a hole but couldn’t be bothered to dig it deep enough. They didn’t cover the shelter with earth. It stuck up from its shallow hole like a tin shed. It flooded and frogs moved in, meaning that none of the women would go near it. Nobody in the family ever used it on even a single occasion. Bombs fell, the anti-aircraft guns they called ‘Big Bertha’ resounded from the Rowley Hills behind the house, but my mother’s family ignored it all and went about their business as usual. I suppose you could say they kept calm and carried on. (Grandad Price would have said, 'Where there's no sense there's no feeling.')

Nor did my mother's family have black-out curtains. Either nobody in the family could be fashed to organise them, or they had other ideas about what to spend money on. My mother usually came home from school to an empty house because everyone else was at work. She did this from an early age, well before the war began, because she told me of being too small to reach the latch and open the door. She used to stand in the yard and wait until the family cat came home. The cat leaped up, swung on the latch and let itself in. Mum used to tell me how much she resented that cat and its lordly ways.

During the war her family were either working, volunteering for war-work or socialising. So she came home to an empty house and then spent the evening alone. She would light the gas-lamps to begin with but the air-raid warden would come and bang on the window because light was showing, and she’d have to turn them out. You could be prosecuted for showing light. Alone in the dark she listened to ‘The Man In Black’, Valentine Dyall, tell ghost stories. Here’s a sample -

Altogether, my mother’s family had a casual attitude to air raids. When the siren went while Mum was at school, they were supposed to go down into the school cellar and stay there until the all-clear. However, this always meant listening to one ‘teacher’s pet’ recite ‘The Fighting Temeraire’ and the other teacher’s pet recite ‘The Charge of the Light Brigade.’ (My mother was certainly not a teachers' pet. Her teachers disliked her for being one of 'that rowdy family.')

She liked poetry (The Highwayman and Young Lochinvar were her favourites) but her war-time experience left her with a lifelong dislike of the teachers' pets’ choices.

When the sirens sounded, children were allowed to run home to their family shelters if they lived close to the school and their parents were at home. My mother’s best friend lived in a house in the same street as the school. Faced with hearing ‘The Fighting Temeraire’ and ‘The Charge of the Light Brigade,’ yet again (with all the actions), my mother got her friend to tell the teacher that they were going to run to the friend’s house. The teacher let them go.

What they hadn’t told the teacher was that the friend’s mother and father were both at work, the house was locked up and they had no way of reaching the friend’s shelter in the yard behind it. While the bombs fell and the guns fired from the hills, while shrapnel rained down, pinging off metalwork, they wandered round the streets; and they did this every time there was a raid during school hours. They whiled away the time by studying the gardens and giving them marks out of ten for neatness, productivity or pretty flowers.

Whenever the Second World War is mentioned, that’s the image that comes to my mind: two little girls looking over a garden fence and assessing flower displays while bombers fly overhead and guns boom and recoil, boom and recoil on the hill where I live now.

I looked up ‘The Fighting Temeraire’ while writing this blog and I think, in Mum's place, I would have risked the bombs too. 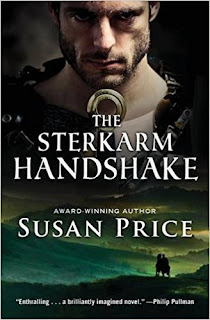 We are grateful to Susan Price for stepping in with this reserve post, as our planned guest for December fell through.
Posted by Susan Price at 00:01

Wonderful, energetic post! And disregard of rules and dangers too.

My Father used to tell of going to school after the raids picking up bits of shrapnel, the bigger the better, which led to him and others pouring over the bomb sites grabbing still hot and often bloody pieces from still live sites and occasionally being shouted at when an unexploded bomb was found. to make things more interesting my dad was disabled and had callipers on his legs and was supposed to go by bus to his 'special' school, but he would hop off at another stop and wander the streets until he found a decent piece of shrapnel, then he would 'walk' to school and join in after morning nap time! By the time he was 14 he was out of school and working (1945ish) they had an Anderson shelter int he back garden, but my mum had one that was inside under a table! which seemed more dangerous to me, esp as they were close to the docks in Liverpool!

I agree with your mum about the poems, Sue. I too loved Young Lochinvar and The Highwayman. Great post!

Such wonderful memories! I, too, would suspect that cat enjoyed every moment a human waited on it to open the gate. If they had kept the monkey, it could have been trained to open the gate, and probably with less cheek than a cat!

Thank you all -- it's a joy to share my mother's memories with a wider audience. Ruan, your family seem to have had much of the same spirit as mine!

Abigail, I always feel really sorry for that poor, mistreated monkey -- but I don't know what they would have fed it on, given that they had very little themselves and were on rations. I wish I knew what happened to the monkey after my Gran ordered it out, but I don't suppose my mother knew either.

I'd never heard of that Fighting Temeraire poem before (lucky me) - I only knew the painting by Turner, which is wonderful.