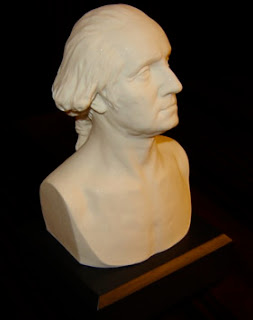 I kept a cheap reproduction of George Washington on my desk while writing the denouement of my time-travelling trilogy. I’d bought it on a book tour during a visit to the city named after him and the object gradually accrued a bizarre emotional charge. What sad and ludicrous creatures novelists can be. As I plotted to sabotage his success in turning around the Revolutionary War around against considerable odds, the (miniature resin statue of a) great man would make me feel guilty. There was a certain masochistic satisfaction to be found in this. I would think about his courage, the terrible problems he had with his wooden false teeth, how his men wept when he took his final leave of them. General Washington, on the other hand, just stared back me and would elicit pangs of shame as I ruled out one strategy after another until I concluded that cowardly assassination by twenty-first century revolver (with the help of night-vision glasses) was the only way to go. For months I was not certain whether, when it came to it, I would have the conviction to actually kill Washington or downgrade the crime to a near miss scenario. This was reflected in my writing: Lord Luxon’s minion bottles out of doing the deed, a dog gets in the way, the timing goes wrong. It was less a case of cranking up the dramatic tension than a symptom of a storyteller’s procrastination. But I woke up one morning, grabbed my pen and I seemed to have made a decision: Lord Luxon squeezed the trigger. It weighed so little the bullet that sped across the stormy night to lodge in a human heart, and yet it had gathered enough momentum to topple a nation.

In the last days of 1776 the Patriot cause hung in the balance. Washington and the Continental Army were in retreat and were gathered on the banks of Delaware River with as many boats, large and small, as they could lay their hands on. The veterans of a long campaign were exhausted and poorly equipped. It had a been a severe winter and the weather on Christmas Eve was truly appalling. Icebergs floated on the turbulent waters, heavy snow fell, and a north-easterly gale blasted the riverbanks. Many of the men were without shoes, their feet bleeding, frostbitten, bandaged against the freezing cold. To attempt to cross the river in such conditions was madness – which was precisely why Washington elected to make the attempt. If he succeeded he could mount a surprise attack on the mercenaries in the pay of the British who were camped at Trenton. Downstream from Washington, General Ewing and Colonel Cadwalader both tried – and failed – to cross the Delaware. Washington, with his grim determination and his watchword of Death or Victory! succeeded where his comrades had failed: he ferried his army across the river from Pennsylvania to New Jersey, claimed an easy victory at Trenton and went on to gain a second victory at Princeton. These victories breathed new life into the Patriots’ cause. If Washington had failed to cross the Delaware at that moment, it is possible that the British would have won the war and kept hold of their colony – at least for a while longer. And one can only speculate if there would ever again have been the will, the opportunity, or the precise mix of circumstances to grant the Patriots the independence they desired.

I wrote the trilogy for children. One thing I wanted to get across to a young audience is that history is not predetermined: it is not a neat demonstration of cause and effect, even if, in hindsight, historical events might sometimes appear to have been writ in stone. I wanted to highlight the precariousness of Washington’s position in late December 1776, I wanted to give a sense of how the Patriot cause – and the imminent birth of a modern superpower - was balanced on a knife edge. Ironically, in order to subvert history, you need to pay very careful attention to what actually did happen. How easily that Patriot victory could have slipped away – even without a time-travelling intervention. If the weather had not been so severe (the mercenaries were caught off their guard ), if Thomas Paine’s rousing pamphlet had not been circulated to the exhausted men (These are the times that try men’s souls...Tyranny, like hell, is not easily conquered; yet we have this consolation with us, that the harder the conflict, the more glorious the triumph...), if Colonel Henry Knox, with his booming tenor voice, had not been there to shout orders to his men over the deafening storm, would the revolution have failed?

Encouraging my readers to imagine the aftermath of a counterfactual historical event was another aim. Predicting the consequences of different actions and modes of behaviour is, after all, an essential life skill - and it’s one which has to be learned. ‘What if?’ is an important game. I knew, for instance, that the ill-fated Louis XVI had emptied his coffers helping the Patriots oppose Britain. The Patriots’ victory, as well as the strain it put on France’s finances, were contributing factors in the 1789 revolution. What if the American Revolution had failed in 1776? What if Louis XVI’s finances were, as a consequence, in a much healthier state? Would the failure of the American Revolution have made the French Revolution less likely?

I recall having dinner with friends and discussing what America might have become under British rule. Some of that conversation found its way into my book. We talked of New York as a provincial backwater where the architecture was boring and where it was impossible to get a good cup of coffee. We imagined Canada gaining control of large tracts of the country including California. In truth I found picturing recent world history without a powerful USA a very tall order. Writing Time Quake sensitised me to the fragility and randomness of things: it also reminded me not to count my chickens. I’ll end with a quotation from the historian Niall Ferguson. He argues: “the best answer to the question ‘Why bother asking counterfactual questions?’ is simply: What if we don’t? Virtual history is a necessary antidote to determinism.”

Oh I do agree that it's wonderful to say 'what if?'. I guess it's what we ask ourselves at the start of writing any book. I've recently finished my next book Road to London set in 1599 in which I use real events, real people but, like you, I get all the fun and paint in my own details. Interesting blog, Linda. Good luck to Mr President.

Re what would America have been like, it is also instructive to see Washington from the black American viewpoint such as in the Schama book, Rough Crossings. They may not have had good coffee (but better tea surely?) under British rule, but they would have had a free black population as a reward to this part of society for supporting the British side. Also Americans wouldn't be so mad about gun ownership now as they would have no constitutional right to bear arms. Here, I'm persuading myself that Colonial America might not have been such a bad thing! That can't be right...

I'm heartened that you have that bust of Washington. I like to have a concrete object symbolising whatever I'm writing about for each book.

For David I found a very good accurate small replica in the Accademia. For each stravaganza novel, I need a talisman to hand.

Tolstoy was convinced that individual people like Washington or Napoleon did not affect the course of history. Had they not existed, the tide of history would have created other leaders. He makes a strong argument, but in my own life I know that very small chance occurences can change everything. My best friend's wife went for a drive to buy an antique and was hit by a truck. Now his children grow up without a mother.

We have such a burning desire to know "what if" that we've had to invent time travel, at least in our minds. Your book sounds wonderful Linda. I've often wondered about the Delaware crossing and other points in the revolution where the patriot cause could have been derailed. I guess I am a bit of a closet Royalist, even though I do love Washington.

Fascinating post - and I so empathize with the guilt over the bust! We have to be murderers sometimes, and it's disconcerting to have the victim looking reproachfully at us while we're doing it.

I think the 'what if?' question is irresistible even in writing 'straight' history, because we have to keep asking ourselves 'what's at stake?' I have the 1640 Battle of Rocroi in 'In the Name of the King', and thinking what would have happened if Spain won made my head spin. The Catholic powers would have won the Thirty Years War, and the last little Protestant stronghold in Europe would have been Britain. If Spain had sent another Armada in the 1640s when Britain was already reeling from her own Civil War, what then, I wonder - what then?

I guess our motto's in that ominous little rhyme 'For the want of a nail the shoe was lost...' Every tiny thing has consequences, and in the worlds we're writing they can be huge.

Thanks so much for these great comments - I really could have done with talking to you all before I set pen to paper! I'm also glad I'm not the only one to clutter my desk with objects...

After reading your post I got Volume I out of the library, why my son and I will start reading to each other tonight. He is very much into the idea of time traveling. One of our favorite family games is Chrononauts, which allows you to change historic events, which creatives alternative time lines (http://www.wunderland.com/LooneyLabs/Chrononauts/ ).

Helene - thanks for your comment. I just had a look at a description of Chrononauts. What a great idea for a game! Though I'm probably going to have to resist getting a copy...

In our first History A Level class the other day, the first question we got asked was who, in our opinion, is one of the most important historical figures...? I said, George Washington. My argument was that I could not imagine a world without America - a situation which, had George Washington not been the driving force behind the Revolution, might have been the case.

But, if I'm truthful, I never would have come to my conclusion at all had I not read "Time Quake" to begin with! Thank you for your brilliant series that caught my attention when I was twelve and got me absolutely fascinated with history. This post was brilliant and I hope to read more from you soon!

Emma - I've only just seen your comment. Thank you so much!