MEDIUMS - then and now Mary Hooper

“When the dead talk, the living must listen” – or so the strap line says of my new historical novel, VELVET, published 5th September. VELVET is a story about a medium – or, more precisely, about a girl who goes to work for a medium - and of course I had to do research for this which involved going to see “real” mediums on stage in small local theatres.

As the curtain opened on the first of these, the medium came forward to ask if anyone in the audience was a confirmed sceptic. I put up my hand (I was the only one) and she fixed me with a glowering eye and said, “Yes. I see.” After that, far from trying to change me to a believer, she didn’t look my way for the rest of the evening.

I was really hoping for more: the way one would quite like to see a nice ghost. I had very much hoped to be selected by the medium and receive an inspiring and uplifting message. Perhaps the spirits would know that I was planning to write a book about them and turn up to give a good performance?

Unfortunately, they did not. What happened in all three events I attended was, after passing on several messages that seemed to mean something to certain members of the audience (had they been planted there, I wondered?) the medium resorted to asking basic questions: had anyone in the audience someone in spirit called – say - Fred, or John, or Anne. Of course, most people did know someone deceased who had these not-very-unusual names, and it wasn’t difficult to fabricate stories around them. The medium would say, “I’m getting some disconnected messages here, tell me if some of them mean anything to you”, then throw in a few suggestions: Uncle Fred had had a great sense of humour/enjoyed gardening/liked to travel abroad/watched a lot of TV, and the audience member would seize on any that were relevant to him or her.

The medium would then go on to employ the type of “cold reading” used by Derren Brown, analysing the audience member’s body language, speech patterns, level of education, clothing, hairstyle, etc. and making high probability guesses – messages which were purported to have come from Uncle Fred. 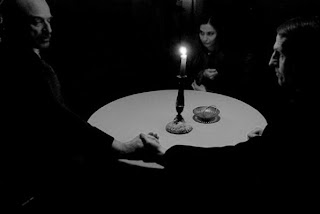 Never did anyone receive a message which stunned and amazed them, a communication which could only have come from “beyond the grave”.

At the second event I attended, the medium resorted to asking the audience (rather desperately, for lots of spirits had come through but no one knew who they were) if there was someone in there tonight with a black handbag. About three quarters of the audience raised their hands, and then looked round at each other and laughed nervously. And this was the event at which the medium and her assistant were waiting in the foyer of the theatre to greet, talk with and “put the audience at their ease”. Hmmm...

Oh, and dates. Sometimes these were thrown in with random messages, the medium saying they were birth/anniversary/marriage or death dates. If no one claimed them as a date they recognised, the medium said they would “make sense later” when we got home and realised this was the date on which Auntie Rose/Grandma died. Or was born. Or....yes, you get the picture. I think that, given half a dozen different dates, most people would be able to make one of them mean something.

My book is set in 1900, and perhaps one of the most interesting things I discovered when researching it was that every single “big name” Victorian/Edwardian medium was accused of fraud, and only one of these was not convicted of any wrongdoing. I am not saying that speaking to spirits is impossible – just that I never found any clear evidence of it, now or way back then. I will let you know if I do.
Posted by Mary Hooper at 00:07

Mary, I loved Velvet and it is fascinating to see how you did your research. Spiritualists were very popular in my period, too (the American West in the 1860s) and one commentator said that being a medium was one of the few careers a woman could have at that time where they were respected for speaking their minds.

One fascinating thing the American mediums did was to get spirits to tap on the floor, from underneath, apparently. Did you come across this at all? And if so, do you know how on earth they did this?

Hi Mary, I am so looking foward to this book! When I was working on a TV thingy about possessed children (I know that sounds like I'm making it up already) I visted several spiritual healers or Witch Doctors in v dubious parts of East London. Both were quite scary. One was in a cramped tiny flat near West Ham football ground. There were about six young men living in three rooms and it STANK of sweat. We sat on a cleared patch of carpet and he did all sorts of stuff with bits of earth and bone and I was utterly freaked. When he told me to go to a cash point and get out £300 I left and didn't go back.
The other one was right around the corner, I knocked and waited and knocked, and then a v expensive car drew up and told me to get in as the guy wasn't there today. When I asked where we'd be going the driver wouldn't say so I didn't get in.....

Gosh, Catherine, how terrifying! I've read such terrific reviews of 'Velvet', Mary, and I can't wait to read it. I am very intrigued by the subject & by your research... the juxtaposition of (potential) terror/uplifting revelation and (actual) mundanity at the gatherings you describe must feel pretty odd. How disappointing that they didn't try to "convert" you!

This is such an interesting post, Mary! And the comments are very fascinating too. Rather you than me, Catherine! that sounds really terrifying.
And if you haven't read it, BEYOND BLACK by Hilary Mantel is a wonderful book which takes you behind the scenes as it were in a medium's life. It's full however of REAL spirits!

I've just been researching Elizabeth d'Esperance and some of the feminist literature on Victorian spiritualism. My sense is that, while they may all have been engaging in some degree of fraud or cold reading, the celebrity mediums of that period were, at least, offering their sitters a very good performance. I'd love to attend something comparable, but, based on your experiences, it sounds like that would be pretty hard to find.

I hadn't heard of Velvet until now--I can't wait to pick up a copy.

Intriguing post, Mary. Can't wait to read Velvet. I have a friend who, on hitting a depressing period in her life, can be guaranteed to head towards a medium and afterwards swears blind she told her things about her life that she couldn't possibly know. It's strange that when her life is going swimmingly, she doesn't think to go near one.

Looking forward to Velvet, too! I remember seeing a picture of that medium who was the last to be charged under the Witchcraft Act, who gave messages from a ship that had gone down and it was a state secret, during the war. Can't remember her name. But anyway, there was a photograph of the 'ectoplasm' that people raved about, and it was soo clearly cheesecloth..
Lovely bit about a fraudulent medium in E S Benson's 'Queen Lucia.' btw.