From the Sketchbook: Summer’s End 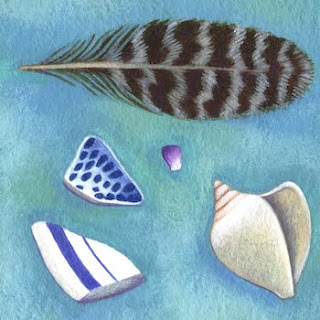 I just came across a small plastic bag in my studio. Inside was a collection of sea glass and pottery shards from one of my top-secret locations on the west coast of Scotland. I felt the loss of summer days as I brushed away the sand and bits of dried seaweed. August’s salty wildness has no place in business-like September. Or does it?

We hurl ourselves into autumn with long lists of creative goals we mean to accomplish, relieved that people are back in their offices and that, at last, things are getting moving again. Suddenly, we are keenly aware that winter festivities are just ‘around the corner’. Before long, we are stuck and uninspired, weighed down by the calendar and its deadlines.

The ideas that flowed while we walked beaches and explored new places are harder to reach, packed away with the sandals and shorts. It’s no surprise that we are more receptive in a beautiful place with no pressures. I once played with the idea of a graphic novel while on a Greek island. I was convinced that I would start it upon my return home, but when I was back in my studio overlooking the motorway and tower blocks, the plan melted away. I had enjoyed playing with it, but the passion did not last. I decided that was okay and moved on. When I think of that Greek island now, remnants of the story resurface and I remember the pleasure of inspiration flowing in.

But how do we call down the Muse when the next holiday is almost a year away? Or when there is no chance of a holiday at all?

Ideas turn up when we aren’t looking for them. I once read that people find inspiration when they are in one of the ‘three B’s’: bed, bath and bus. When I step away from the struggle to unblock my creative flow or to make a problematic manuscript work, solutions bubble up. I’ve grown so used to these practical epiphanies that I look forward to my morning ablutions and transport to the studio. If I really want to tempt inspiration, I have to leave my routine, even if only for a little while. I wander through the wool department in a department store to soak up the rainbow colours or dig through a chaotic used bookshop looking for nothing in particular.

Sometimes I step back into the studio with a fired-up head and a lot of fantastic photos. Last weekend I went for a forest walk in Aberfoyle that was far more atmospheric than I expected. It was hugely inspiring but I still feel slightly odd when I look the pictures. You can see them and read about what I experienced on my blog.

I bring home treasures after other mini-adventures. Even the smallest objects can call down the Muse. After cleaning my sea pottery and glass with great care, I wondered how they were driven into that special cove where so much washes up. I became slightly obsessed with finding out how old the china patterns are and where they were made. Who might have owned the shards when they were part of whole plates and cups? In my hand were a dozen mysteries in the form of sea pottery.

I located other people who are passionate about sea glass. I became fascinated with the potters’ marks I found on some pieces. I discovered I have many pottery shards that seem to be decorated with the late eighteenth-century Willow pattern, which has an intriguing legend associated with it. So far, so good. I even found an explanation for a small white glass marble I collected: it may have been ballast on a ship. A story started creeping into my head. 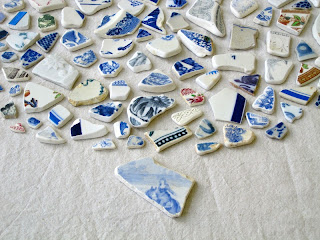 But then I came across a china shard that intrigued me more than all the others: the lady on horseback, arm outstretched with a landscape in the distance. What is going on in the rest of the picture? Suddenly I could ‘see’ who was with her and what was about to happen.

A few scribblings later, several tiny story ideas were in my notebook and the talismanic shards and marble went back to the windowsill overlooking the motorway and the tower blocks. They may trigger a novel or end up in a painting like the one at the top of this post. Or not.

I hope they will be joined by a pinecone from a haunted castle garden in October or a battered book of old woodcuts in November – or any new talismans that usher in the wildness of the creative spirit.

Teresa’s second novel in The Blackhope Enigma series, The Crimson Shard, will be published by Templar Publishing on 1 October in the UK. You can enter to win one of five copies in our competition on 30 September!

What a lovely and inspiring post! I envy your collection of sea pottery. I've been trying to years to make one of blue and white china dug up in the garden, but it's a slow process. And one I found a piece of purple and white china with a lady and a grecian urn on it, at the moss-covered doorstep of a ruined Tudor farmhouse high up in the Dales. I treasured it for years - but somehow, I've lost it along the way.

Just reading your blog this morning calmed me down (currently tied in knots over a piece). Trusting your subconscious to come up with the goods and putting yourself in a situation where that can happen is all part of it. Lovely images and lovely post, thank you.

Lovely post! I have a small glass dish, shaped like a shell, in which I keep pieces of beautiful, pearlised blue, green and purple sea-glass, together with some bits of blue and white china - all gathered from the beach at Pittenweem while we waited for the firework display that marked the end of tiny Pittenweem's very special Arts Festival. Collecting such things seems to be a writer thing!

I love the idea of your talismanic shards and sea-glass intervening between you and the towerblocks and the motorway.
We all need to lay up treasure against ugliness. For we cannot all be in Aberfoyle or Pittenweem all the time, more's the pity.

Yes, what a wonderful breath of sea air! As Linda said, your words and pictures are so calming. I was also fascinated to read that "people find inspiration when they are in one of the ‘three B’s’: bed, bath and bus." For me it's walking! By the river, to the shops, even yesterday on Oxford Street I got inspired and energized! It's also good to do something right brain, like going to a movie or an art exhibition or some free lunchtime jazz. Of course it helps if you live in London!

Well, I have a unicorn for a muse... the only trouble is he keeps vanishing into the enchanted mists when I most need him, and he can be very shy.

What a lovely cover for The Crimson Shard!

Great post. I'm definitely of the three 'b' s school- brain doesn't function on holiday but I have all my ideas, such as the are, in the bath.

I knew I'd find some fellow 'collectors'! And I'm glad this wee piece spoke to you. Many thanks for commenting!

I loved this post and the painting! I am cheating by having a late week on a Greek island in October. I shall be beach-combing, reading and dreaming. And maybe coming back with a new idea for a book.

What a lovely post. I'd never thought of collecting shards but they are perfect for storytellers. A fragment in a shape that hints at much more. Or maybe I've never been lucky enough to happen upon a good one yet... A post for opening the creative eye - thank you