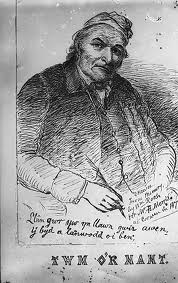 Those two gentlemen lived at almost the same time on different sides of the world. Twm o’r Nant – that’s his nom de plume – was Thomas Edwards, born in 1739. Valentine Dwyer, owned the Green Mount estate in the parish of Manchester, Jamaica, he died in 1824.

I haven’t a history book out until 2013, and over the summer, as a kind of massive distraction to various comissions and rewrites started digging up my own family history. I would love to say, like K.M. Grant earlier, that there were nobles, that I was named for and descended from Catrin of Berain. That’s her in the second picture, a Tudor heiress who married often and well, (every husband bought more land and power and usefully, predeceased her) or someone like that. And I suppose given that North Wales, before cars and trains and aeroplanes was a reasonably tiny gene pool perhaps I am. And just looking at her, hand on skull, widow’s cap on her head I want to write about her. What a frock, what sleeves....
Oh there you go another major digression. 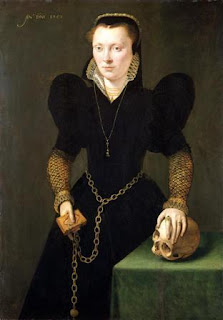 Back to those two men I mentioned earlier. Well, I was lucky that one of my cousins had actually traced my Welsh family tree as far back as Thomas Edwards, Twm o'r Nant. There’s something! I bet you have no idea who he is? Well he was a playwright, one of the foremost in the Welsh language, a peasant who went to school for a fortnight and wrote plays and interludes sometimes using blackcurrant juice instead of ink, and he is my great great great great great Uncle (I may be missing a great or so but you get the picture).

My father was born in Jamaica. He was an old Dad, 46 when I was born, and this summer I went to the funeral of his last surviving sister. Their parents, whom I never met were married in Edwardian times, my Grandmother, Teresa’s parents, my great grandparents, were born in the 1860s. It almost boggles the mind. There is more. If you think that just thirty years earlier, slavery still existed. My great great grandparents, most probably, belonged bodily to someone else, could be bought and sold.

And that’s where we get to Valentine Dwyer. His plantation was in the parish my family are from. I haven’t gone further back than my great Grandfather, who must have been born between 1840-50, but it’s not too large a leap of faith to imagine his parent or grandparent came from Valentine Dwyer’s estate in 1817.

I can read, online, the list of his slaves; Hector, Limerick, Moir, Sally, Marget and Daphne. And the children Cuffie, 8, Mary Anne, 1, Prudence 5, just to name a few. There are no pictures, but the names strike almost the same note to me as Catrin of Berain.

Who were these people? What was it like to be Cuffie, 8, running down a hill on the Green Mount estate in the parish of Manchester, barefoot in the red earth, running to get inside before the storm broke…

Posted by Caroline Lawrence at 10:05

I love this post, and I want to know, too, what it was like to be Cuffie - because I can see her now, from your description... (Write a story, Catherine, please!!) I can also relate totally to the feeling this post gives me of the delights of following a scent, of getting diverted (in a good way), and letting yourself be led along a path. The path is like one of those line-ups for the Queen to meet and greet; it's MADE of people - of individuals whom you then begin to wonder about and imagine the lives of. This is what I love about history - family history, all history. It's endlessly fascinating. Thanks for this lovely post!

You HAVE to write both stories, Catherine! Maybe they could be linked?

Fascinating. And a wonderful scribbly drawing of Twm o'r Nant.

I enjoyed reading your post and it made me think about my father's attempts at our family history. he has concluded that the further back you go the only ancestors you can trace (unless you are noble) with any detail are the criminals, thanks to court records. I can claim to be related to a man who defrauded the Bank of England (he got transported to Tasmania).

These days Eve he would get a knighthood - or he'd be in charge of th e bank of England!

I thought you might be interested to know that the UK Olympic silver medallist Colin Jackson was on the TV programme "Who do you think you are", and part of his family were "owned" by Valentine Dwyer.

With a Hotmail account, you can send and receive emails quickly and easily as well as login and use all Microsoft services.
hotmail login | sign in to hotmail | recover hotmail password
This is the game so players feel very fierce , adventurous . You try to join and play this game , you will feel great like.
strike force heroes 4 | slither.io | red ball | duck life
fireboy and watergirl 2 | io games | tank trouble 2