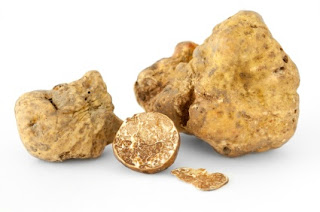 I’ve just come from Le Marche, a region of Italy which even if you mention to Italians sometimes meets with a blank stare. It seems shielded from the rest of Italy, a land where time is told by the tolling of church bells and where slow cooking never became a fashion… it always was. Yet come autumn Le Marche becomes the epicentre for the most sought after ‘diamond’. In October the hunt for the white truffle begins. Aqualagna, a small town of only 4000 people just south of Urbino, is where two-thirds of Italy’s truffles are found.
These pricey little nuggets, cloaked in earth, have inspired gastronomic pilgrimages to the area for centuries. There are sixteen varieties of truffles but only two are worth killing for… tartufo bianco, the white truffle, and tartufo neri pregiato, the black truffle. It's said that Italian truffle hunters dig up 100 metric tons of truffles each year... mostly with the help of dogs. Duels have been fought and families split apart and truffle hunters will take their secret hunting places to the grave only passing them on to their sons in sacred whispers.
On doing the rounds of the Marchigianian countryside, I was reminded of how holidays for writers are always a hunt. Take any historical writer to a new place, or even a familiar one, and they’ll be turning over stones, picking off the moss and trying to unearth the scent of something that will spark an idea. We hunt for hidden little gems as earnestly as dogs sniffing out truffles. But unlike truffles with their sharp earthy smell, the gem's not always recognisable at the time. We catch a glimpse of something that shimmers but it’s like a beautiful shell lying at the bottom of a pock pool. You see the image but the water shivers and the shape distorts and you’re not sure of what exactly is drawing you towards it.
This time in Le Marche I found strange faces popping out at me. In the ruins of the ancient Roman town of Urbisalglia on the crossroads between Senegalia and Ausculum (today’s Ascoli Piceno) and Septempeda (today’s San Severino) there’s a temple built in about 100 years BC, dedicated to the goddess Salus Augusti. Around the temple in the ruins of the cryptoporticus are surprisingly fresh frescoes. 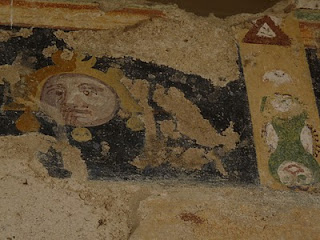 Mysterious moons and faces more than two thousand one hundred years old, stare out at me. Who is the man behind the pigment? What does he know and what has he seen over these past twenty one centuries? 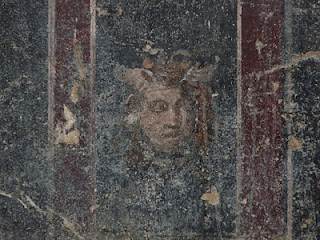 In the nearby hillside town of San Ginesio with its population of 3700, is the church of the Collegiata, part Romanesque and part Gothic, which was once the meeting place of the Knights Templar. Peeping out from the magnificent 11th century portal, so small you might miss it, is the face of the actor, musician, mime artist and finally saint after whom the town is named. He was beheaded by Diocletian, even though Diocletian was fond of him, for his mockery of Christians before he was converted. His tiny chiselled travertine face has stared out over the Piazza Gentili and seen ten centuries of history for San Ginesio when it was once a way station for pilgrims travelling between Loreto and Rome and where at the Porta Piceno gate a hospital built in the 13th century for ailing pilgrims, still stands. 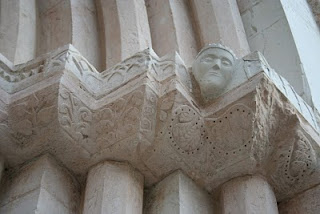 Fascinating secret hidden gems… faces caught fleetingly of two eras split by a thousand years… one in fresco pigment, the other in stone. But unlike the truffles of Le Marche they don’t yield up their essence easily. They don’t speak the full story yet. So when my husband asks… can’t you ever just be on holiday? My answer is… Why would I? But unfortunately as Michelle says in her blog Window Shopping at the Museums, I can't ‘bag them up’... even if Ryanair's luggage policy wasn't so draconian. So they come back trapped in my camera waiting for the right 'truffle' moment when they'll reveal all.
For those of you who enjoy lists as well as history, you might like to browse the Hidden Little Gems site:
http://apps.facebook.com/hiddenlittlegems/ (search Eat in Le Marche, Italy)
www.diannehofmeyr.com

This is a lovely post. I must confess to never having knowingly eaten anything with a truffle involved....it comes under a list of 50 things to do before I get too decrepit!

You are so carefully observant, Diane - lovely!

What wonderful 'faces'. Thank you.

The only truffles I've ever eaten, Adele, I'm sure were the cheaper summer variety but even they had an intense musky flavour. Interestingly enough in Medieval times the Church banned the eating of truffles. They were thought to be the creation of the devil... or witches fare, because of their exotic aroma.