MY GRANDMOTHER'S BALLROOM BY ESSIE FOX

It’s hard to say exactly what inspired me to write a Victorian novel. Some say you should write what you know and love – and although I certainly wasn’t alive at the time of the nineteenth century I’ve always adored the dark gothic tales of the Brontes, or Wilkie Collins, as well as more recent ‘Victorian’ fiction by authors such as Sarah Waters, Michael Cox and Charles Palliser. 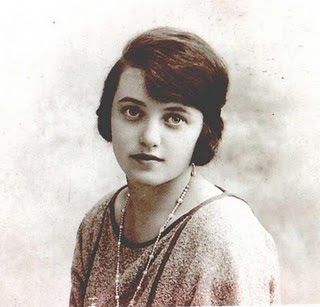 Essie Fox's grandmother, Octavia Betty Thomas - picture taken around the 1920's
What I ‘knew’ of that time when I started to write was really very little. But, there was something from my childhood which had an enormous influence – and that was my grandmother’s ballroom, complete with its very own stage. And, although never tempted to act myself, I always loved to stand on that platform, imagining how it might once have been – all the music and dancing, the sounds and smells, the contrast of darkness and sparkling light, and the sense of suspended disbelief in which any story might chance to unfold, all of which was still very strong in my mind when I set The Somnambulist’s opening scenes on the stage of a Victorian music hall.
Octavia (Betty) Thomas was herself a Victorian, being born in 1900 and named as such because she was the eighth child in her family. When Octavia married – indeed, for all of her married life – she lived on the top two floors of what had been a coaching inn, in the ancient market town of Leominster, in rural Herefordshire. 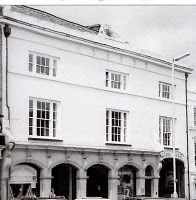 The Lion in Broad Street, Leominster, Herefordshire
The hotel was constructed in the 1840’s, only to fall into bankruptcy as early as 1851, having opened up at just the wrong time – at the dawn of the railway era, with very little going on in the way of the ‘old-fashioned’ coaching trade. By the 1880’s my great grandfather had purchased the inn when a partner in a firm of ironmongers – at which time the ballroom was used as a showroom, filled with such items as cast iron grates, chairs, tables, bed frames, and umbrella stands. But with so much heavy stock being constantly shifted around, the ballroom soon fell into disrepair. 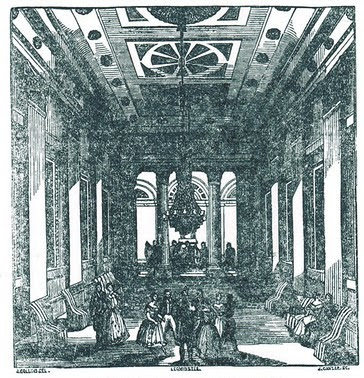 The ballroom in its heyday  - as illustrated in the Hereford Times, in 1843
By the time I stood upon its stage the contents were even less glamorous, the family then trading with farms around, supplying agricultural feedstuff and heavy machinery. Even so, the Lion Inn reeked of history; a time when it aspired to be so much more, and I always thought it a magical place with a grand arch that led from the street outside, through which the coaches would have rolled, leading on to the stable yards – a great sprawl of buildings where I loved to play before returning to the ‘house’, clambering up some spiral stone steps to find myself in the wood-panelled hall where my grandmother kept an old grandfather clock. I was always intrigued with its heavy tock. I used to imagine standing on tip toes to grab at the big brass pendulum, to make time stop, or even go back, because when my grandmother took my hand and led me into dark corridors, then on through a pair of double doors to enter the Lion ballroom, how I wished I could have been there to see it in its heyday, instead of its crumbling disrepair, with sacks of grain piled up at the walls, rats skulking through shadows, and enormous cobwebs that dripped down like lace from the plasterwork. 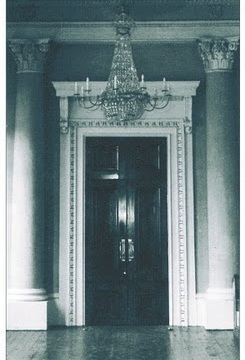 The doors leading into the ballroom
When my grandmother stood at my side in that room she would tell me some witch had cast a spell, that the stage was only sleeping then, that the ballroom might echo with music once more, and women in gorgeous long silk gowns would dance with handsome gentlemen. And now, that spell has been broken. The ballroom has come back to life. Though no longer owned by my family, its original splendour has been restored, open for public and private events. 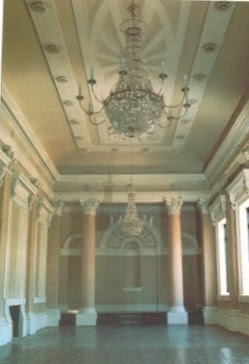 The ballroom as it is today
If only Octavia was here today, I might take her hand and walk inside, seeing it as it was meant to be. But as yet, I haven’t had the heart. Too many dreams and fond memories were bound up in the nets of those cobwebs. Without them – without her – it would not be the same.
EssieFox was brought up in Leominster where most of her family still live today. Her debut novel, The Somnambulist, a Victorian gothic mystery, is published by Orion Books.
Posted by Essie Fox at 09:24

Well that explains how YOU became a writer, doesn't it! What a wonderful - and wonderfully off-beat - place to know so well.

You can just imagine the ball at Meryton, in Pride and Prejudice, going on there, can't you, even if if this one is a built a bit later.

I'm fascinated by how contingent and pragmatic historical processes are - how a ballroom does become a showroom for agricultural machinery, how the King's banqueting hall at Eltham becomes a farmhouse and then a barn, and then a "country" house for the film actors of the 1920s, and now a wedding venue...

Lovely reflection on time and space.

It is fascinating isn't it, Emma. I remember the ballroom so vividly when it was crumbling and dusty - which is perhaps why visiting Wilton's music hall caught my imagination. It felt strangely 'familiar' in a way that a perfectly restored structure might not. That ballroom really was a huge inspiration - as was my lovely grandmother.

This is such a wonderful and heartwarming post. Thank you Essie Fox for sharing such lovely family memories whose influences I can see in 'The Somnambulist' which I am currently reading and enjoying very much!

I only have one word to say about this post and that's WOWSERS!! Can't wait to read your book, Essie.