Fiction as an Historical Source - by Eleanor Updale

Like most writers of historical fiction, I love the research phase of creating a new book. I adore unfolding original letters, feeling old fabrics, and trying to recreate in my own mind the reality of past times. But there is one other source that I have only recently come to value: the fiction written in the era one is trying to depict.

I’m not suggesting that fiction always gives a true portrayal of the society it serves. If that were true, future historians would look back at our world as one where we all believed in dragons and wizards, where families were hotbeds of homicidal hatred, and where most people lived lives of emotional complexity without ever having to go to work. The real gift fiction writers deliver lies in things they may not realise they are saying: the underlying assumptions and tiny details about how their world works, on which the intricacies of their plots depend. 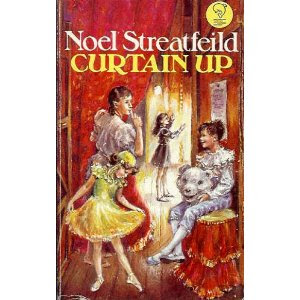 This thought came to me when I was asked to contribute an introduction to a new edition of Curtain Up, written by Noel Streatfeild during the Second World War, and first published in 1944. It’s part of the Ballet Shoes series, and indeed the new edition has been given the American Title Theatre Shoes to bring home that point. Streatfeild’s original publisher had allowed the work to go out of print, and it’s been rescued by Jane Nissen Books (www.janenissenbooks.co.uk) a company which specialises in bringing back lost gems.

The action takes place in wartime London, but not through some literary artifice. It’s set then because that was when Streatfield was writing, and when her first readers were reading. She is not making any extended points about war or wartime life. That just happens to be the backdrop to a story of adolescent aspiration, rivalry, family squabbles and timeless truths about growing up.

So the war throbs on in the background, and the little details that emerge, almost accidentally, are the more enlightening for that. Any of us writing the story now would probably adorn it with all sorts of well-researched titbits about sirens, shelters, blackouts, loss and the spectre of death. Streatfeild doesn’t labour points about rationing or dried egg. If an elegant London square has been allowed to become overgrown, that’s simply an unsurprising fact. A modern historian might not even wonder whether the escalators at London tube stations kept running during the war. If he tried to find out, it might take hours of wading through documents at the London Transport archives. Streatfeild doesn’t go out of her way to tell us that precious power was used to keep the escalators moving – we just find her characters using one, and now we know. Streatfeild is not educating or making a huge revelations, she’s getting people from A to B. To today’s eye, her book is as interesting for what she doesn’t feel it necessary to say as for what she does. 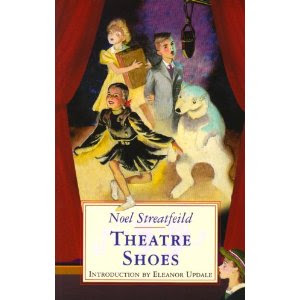 Theatre Shoes contains very few overt reflections on the nature of war, and the changes it brings to people’s lives. How interesting, then, that one of those musings is rather positive: The grandmother in the story has fallen on hard times. She is forced to sell off family heirlooms. The old lady is lucky, says Streatfeild, to face poverty at a time when everyone else is forced into frugality, so her shame doesn’t show. How many modern writers, setting a tale in the 1940s, would come up with that angle?

This is just one book, and of course there are thousands of others, from all times, that give us unintended insights on past societies. Little bits of business (a 19th century heroine curling her hair with twists of paper; a 20th century character taking a phone call at a special table in the hall, or straightening the seams in her stockings) might have been put in for reasons of rhythm or incidental colour, but can tell us more than the author could have dreamed of. Of course we have to be careful not to take the literary cliches of the time as a true reflection of everyday life, but fiction can show things that official documents and sanitised histories never touch upon.

So what are we building into our own books for 22nd century writers to mine? Will they be struck by our pathetic attempts to save the planet by recycling a bizarre assortment of household rubbish? Will they laugh at our ferocious striving for uniformity, while portraying ourselves as free spirits? Or will it be titbits such as how often we wash our underwear or the complexity of our car parking regulations that give them a key to understanding our world?

Whatever it is, let’s hope they don’t end up thinking that we all live like characters in soap operas: inhabiting spotless kitchens as we battle against everything from psychopathic neighbours to terminal illness --passing the time with a little light adultery or incest, while we wait for a boy on a broomstick to come and save us all from You Know Who.

But maybe that is how you live? If so, get writing now.

I agree about the research stage of writing - it is so exciting and full of a million 'possibilities'.

Some great examples of contemporary historical fiction here - and I also love the idea of 'mining' an era for the truth via its fiction.

Thanks for writing this interesting post. As a WW II researcher, I can't express the thrill of finding and handling original objects of this period.

And I completely agree with you regarding fiction - there is so much there, it is just wonderful.

Streatfeild's book The Children of Primrose Lane was my first introduction to Anderson Shelters. I loved it.

I love this post! Partly just because I love Streatfeild. But it also makes the point that came up in the comments on my post on Tuesday, about what a good source contemporary fiction is for our historical fiction.

Meant to say - I do SO agree that often the insights are into what they DON'T specially mention.

I dipped into a Ngaio Marsh recently, which was published in the mid-50s. There are about three mentions of specifically just-post-War stuff: a ration book, the fact that several people know how to do resucitation for gassed cases, and how another person never got used to dead bodies, not even in the War. And that's it. Everything else could be pretty much any time from the 1930s to 1975. No shell-shock, no memories of the Blitz or evacuation, no dried egg, no Austerity.

And it occurred to me that, as you say, Eleanor, most of us might not have the nerve to be so minimal with what to us is historical background - to make the post-War-ishness of 1955 to be so little a part of the experience of that novel.

Partly perhaps that's because the non-fiction pleasures of history are part of what readers enjoy about historical fiction, so they want plenty of it to enjoy.

I strive for the same effect in my fiction: my gold standard for period detail is that there's as much (and as little) as there'd be in a novel about our world, and/or as little someone writing a novel back in that period would put in. But sometimes you do have to explain more - if only covertly, by context, and character-in-action.

Lovely post, Ellie - it's fascinating that sometimes the unspoken assumptions in books can provide the truest 'period detail'- the things everyone took for granted. Love the point about the Underground escalators.

A very illuminating and useful post, Eleanor. Your point about the absence of a later age's cliches in Noel Streatfield's post-war fiction is such a good one. And I do wonder what our time's equivalent of dried egg will be...

This is great, Ellie - thank you. I use paintings in the same way (writing about Renaissance Italy, there aren't any contemporary novels) - they often provide tiny domestic details you don't get from anything else.

It makes you think though, doesn't it, about how few contemporary novels have people taking photos on their phones, uploading their videos to YouTube or Facebook, drinking Red Bull, doing their driving theory test, getting their nose pierced.... the ordinary often isn't mentioned.

I adored CURTAIN UP, maybe even more than Ballet Shoes, though it's a less perfect novel, I think. But Sorrel, Mark, Holly, and their cousins are such wonderful characters. I do agree about the lack of 'obvious' detail - though the thing about the absence of air-raids is that there weren't any, isn't it? I think maybe this was between the Blitz and the V1s and V2s. Oh, I do adore the picture of Hannah, wobbling onto the escalator.

My parents always told me that in wartime, life went on, and I think that point is made by the book - though of course the framework of the whole action is the fact that the father is missing, believed killed. I always cry when I read that bit. I got hold of a second-hand hardback, so I have the book in the house.

I'm writing a novel set in the near future right now, and I do enjoy being able to put in things like smartphones and other bits of technology, just because it makes such a change. But you do realise, don't you, that you've made a powerful point for writing about the present, rather than historical fiction?

Just in case any other Streatfeild fans don't know it, this is a link to a really splendid site, all about her and her work

Hi Eleanor, thanks for this interesting article, it chimed with what I'd been thinking about fiction as a historical resource (though I come at it from a different angle). If you're interested, I comment on your article here!