A Traveller In Time: Sue Purkiss


A little while ago, I was tootling about from blog to blog, as you do, and I came across a post of Kath Langrish's which I hadn't seen before, and in which she talked about two favourite children's classics, Lucy Boston's The Children of Green Knowe, and Alison Uttley's A Traveller In Time. I hadn't read either of them, and was sufficiently intrigued by her description to send for them both.

I read - and very much enjoyed - the first one, and had begun the second one just before we were due to go up to Derbyshire to meet some friends in the Peak District - they had gone up for a party and suggested we should join them afterwards to do some walking. They had already booked a B&B, but you couldn't take dogs there, so as we wanted to take our Jessie, we found another one that did, and they agreed they'd move on and meet us there. (Trust me - there is a reason for all this!)

A Traveller In Time is set in Derbyshire, and so it seemed a very suitable book to take with me. It tells the story of a girl from Chelsea called Penelope, who goes to stay with relations at a farm called Thackers, and finds that she is able to travel back in time - to the time two years before the famous plot, when Mary was briefly imprisoned in a house not far from Thackers, and a young Anthony Babington first became quixotically determined to rescue her.

I read quite a bit of it in the car as we drove up. I know the Peak District quite well. I'm from Derbyshire myself - though from the not-so-pretty bit, in the south - but I couldn't place the setting of Thackers. In Alison Uttley's Foreword, she says it was based on a small manor house which was the family home of Anthony Babington. I'd heard of the Babington Plot. One of my favourite books ever is the Ladybird book of Elizabeth the First, and even now, years after first seeing it, I can visualise almost every one of the coloured plates. Babington's plot was to remove the  Protestant Elizabeth from the throne of England and substitute the Catholic Mary Queen of Scots, and in the Ladybird book, Mary cuts a tragic and dramatic figure; dark eyed, dark haired, creamy skinned: always in motion, always in flight.

When we met up with Rosie and Pete, they were full of what a marvellous place they had stayed at the night before. It had once been a manor house, they said, though now it was a farm. It had been associated in some way with the Babingtons, and there was something about Alison Uttley in the nearby church - she had lived in the village, they thought.

I was intrigued. Alison Uttley also wrote a book called The Country Child, a memoir of her childhood on a Derbyshire Farm. This I had read and loved, though not at all recently. Perhaps the house where they'd stayed was this very farm, I thought? 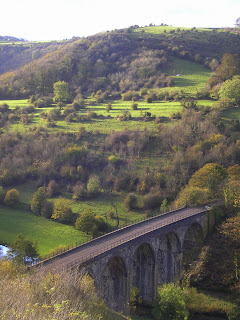 We stayed in Monsal Dale, and had some great walks. (As you can see, it's a gorgeous place.) On the way back south, we were going to stop off at Cromford Mill (the first cotton mill - in fact the first real factory, which is being carefully restored.) The farm where Pete and Rosie had stayed - Manor Farm - was just a few miles up the road, and I was eager to go and see it.

We stopped not far from a village called Lea.. It was a gorgeous autumn day, all sunshine and glowing copper leaves, and the path led through woods and into Lea itself. The farm was further on - across the fields, in a hamlet called Dethick. There is a character in the book called Dethick. I had the book with me: I checked the Foreword again. Yes! It was all becoming clearer. The Uttley farm must have been in or near Lea - she describes it as being 'across the hillside from the manor house'. We carried on - across the hillside. At the top of it was a church, and beside the church was Manor Farm. I went back to the book.

This is how Penelope describes Thackers. 'It was a stone-built farm, with gables and doorways in unexpected places, with barns and cowhouses across the green grassplat and old ivy-covered buildings where fowls roosted and calves sheltered. Only a few yards away was Thackers church, with its twelfth-century tower which rose from the group of trees and haystacks so close to the farmbuildings, the stables and barns, that it seemed to be part of the homestead...' 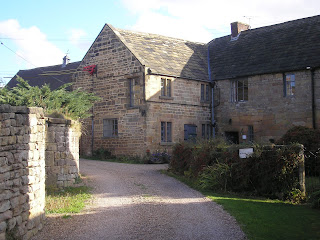 And there it was. If further proof were needed, we found a small plaque set into a wall, which said that this was the former home of the Babingtons.

I felt really thrilled by this. Why? Well, as I've discussed on this blog before, places are important to me. And in some places, more than others, time echoes - people of centuries ago seem only a few steps away. If you just turned that corner quickly enough, or managed to go through that ancient door on the right day, at the right time - who knows what you might glimpse? This place was one of those. And there were two levels to it. Reach so far, and there would be Alison Uttley running across the hillside, and later, writing her books about the place that fascinated her. Reach a little further, and there would be foolish, romantic Anthony Babington and the tragic Queen of Scotland.

If you think you might like to go and stay at the place, here's the link. I'm told the breakfasts are pretty amazing, too.

Wow! I loved those books as a child and I am so envious that you should actually see "Thackers"! There is a real sense of place about "Traveller" and now I understand why. Thanks.

What a fun bit of literary sleuthing, Sue! But what really surprised me was this:

You can read in the car without getting queasy?!

Only on the motorway, Caroline!

Sue, I'm utterly (Uttley?) thrilled to see the photo of the farmhouse, and also to know that I found another appreciative reader for that wonderful book (which has one of the poignant endings ever).

And I agree with you that a sense of place can be so important and magical.

Incidentally, in case anyone esle in interested in having a look at the post which Sue mentions, it's called 'Ghost Stories for Children' and can be found on my blog via this link: http://steelthistles.blogspot.com/2010/05/ghost-stories-for-children.html

I really enjoyed this post. Isn't it such FUN being a historical novelist?

I really enjoyed this post - and I agree with Mary's comment, above! Derbyshire is so very, ruggedly beautiful - my family live on the edge of the Dales so I often go there. I adore Monsal Head (great photograph by the way) and also the village at the bottom of the hill, Ashford on the Water, which I used in Gideon the Cutpurse and always look at through an 18th-century lens. And thank you for reminding me that I must get round to re-reading Alison Uttley's classic.

Oh, we went to Ashford! Now I must read Gideon the Cutpurse. There you go - follow your nose, and you never know where it might lead you!

What a fantastic post, Sue - the series of coincidences and happy chances is thrilling (what if you hadn't seen Kath's post at precisely that time? What if you'd put off ordering the books until later?/your friends hadn't been staying there?/you hadn't loved that ladybird as a child?).

PS I'm very envious of the reading in the car!

I knit in the car too!

This is such a lovely post Sue. Oh you lucky English girls! You all seem to know so much English History and to have lived in such charming countryside. I'd never even heard of The Children of Green Knowe until the Soc of Authors Children's book Conference in Cambridge a few yrs back. What an extraordinary day we had on an outing to Green Knowe... discovering the garden and the objects from the stories and where Tolly slept and then those amazing quilts that Lucy Boston sewed. I was enthralled despite not growing up with the books. Put that on your list too Sue... a visit to Greene Knowe

What a story of lucky coincidences and happy discoveries, apart from Babington, Mary and all. Lovely photographs too.

You could have popped in for tea! I'm only just down the road from Manor Farm!

If only I'd known!

"In some places, more than others, time echoes."
That is so true - and so strange!
Thanks for your post!

Oh! how lovely! Traveller in Time is one of my favourites, and I adore finding literary places.

I can't read on anything with an exhaust pipe - neither car, van nor bus! But I can read on the train...

What a shame you did not knock at our door - I could have shown you our amazing Tudor kitchen where much of A Traveller in Time was set. My husband and I are both trustees of the Alison Uttley Literary Property Trust - we held a four day AU Fesitval at Dethick over the August Bank Holiday, We were overwhelmed by the number of visitors. I tracked you down after a link to your blog appeared on the back end of my web stats. It's all so interesting and I'm really pleased to have found it.

My all time favorite book. Thank you for the picture of the manoe.