The King and the Cynic – Katherine Roberts 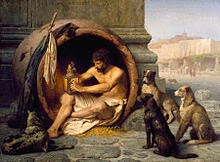 Around 350BC, a man called Diogenes living in ancient Turkey shunned riches, left his family, and made his home in an old barrel. This made him famous throughout the ancient world, but many people could not understand him. He took to extreme measures the Cynic philosophy of the time, which claimed a person could not be happy unless they turned their back on the comforts of life, including their family and friends.
Diogenes had many adventures, including being kidnapped by pirates, and famously told Alexander the Great to “get out of his sun” when the conqueror came to visit him in his barrel and asked what he could do to help.
He sounds like a real character, and while downsizing to live in a barrel might be a bit extreme, it shows that people in the ancient world were asking the same questions about power and worldly goods that we are asking today.
With apologies to its original author Lucian, this is my version of one of the “Dialogues of the Dead” between Diogenes the Cynic and King Maussollos of Caria, whose tomb at Halicarnassus became one of the Seven Wonders of the Ancient World and gave us our word mausoleum.
DIOGENES: Why, Carian, are you so proud and expect the rest of us to kiss your bony ass?
MAUSSOLLOS: Because I’m an important king-soul, of course! I was King of all Caria, ruler of most of Lydia… (gives long list of his achievements), and I wasn't bad looking, either. If they'd had the X-Factor in my day... blah blah blah.
DIOGENES: yawns.
MAUSSOLLOS: If you want proof, my tomb in Halicarnassus is bigger and cost more than everybody else’s! Look, here’s a picture of it. Have you ever seen such a beautiful tomb? Why shouldn’t I be proud of it? 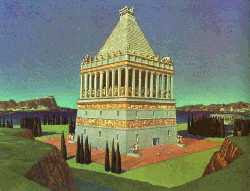 DIOGENES: (examining picture) But we no longer have our bodies, so why do we need fancy tombs to put them in? Is your skull more handsome than mine because it stares at gilded statues? OK, so your mausoleum might be a popular tourist attraction, whereas my barrel has long since rotted away… but what good is it to you now? I bet it costs an arm and a leg to maintain the place. I’d be worried about that heavy marble roof caving in on me, if I were you.
MAUSSOLLOS: (dangerously but ineffectually since he can’t hold a sword any more) Are you trying to claim you’re my equal now?
DIOGENES: Don’t be soft! In a hundred years time, you’ll still be worrying about your great mausoleum there in Halicarnassus, while I’ll be free of all such worries and laughing at you. I don’t even know if I have a tomb, and I don’t care. I asked for my bones to be scattered outside the city walls for the dogs so I wouldn’t need one. I’m remembered for who I was, not what riches I had in the world. That has not changed with my death. Can you say the same, great king-soul?
MAUSSOLLOS: remains silent.
How would you answer Diogenes the Cynic?
The Mausoleum at Halicarnassus provides the setting for The Mausoleum Murder, part of my Seven Fabulous Wonders series, now available as an e-book for Kindle at the special price of 99p until November 30th.

Posted by Katherine Roberts at 04:00

The tomb might have been unnecessary, but going by the picture, it was very beautiful!

I think Lucian would have been proud of that, Katherine! And I had never heard of 'Dialogues of the Dead' - and now I want to find them.

Powerful stuff. And, as you say, as pertinent today as it ever was.

Very pertinent. By coincidence I was talking with students this week about Diogenes and the courtesan Lais, arising from a long passage in a Borges short story about the fact that one coin represents all coins, all transactions, all venality, all misattribution of worth, all reduction of merit to value.

The transaction mentioned was the incident when Lais, after having a look at him, decided to charge Demosthenes 10,000 drachmas - for what she did for free with Diogenes.

So in spite of living in a terracotta pot or barrel, Diogenes must have had barrel-loads of charisma, as your lovely dialogue shows, Katherine.

Kath, I have a LOEB Classical Library edition of Lucian's "Dialogues of the Dead", translated by MD Macleod. (Lucian - Volume VII) so you should be able to find it... I'd be delighted to lend you mine if you can't.

My edition of Lucian also includes the "Dialogues of the Courtesans" - I wonder if the short story Anonymous mentions was inspired by these?

This is brilliant, Katherine. I know it's very pertinent and throught-provoking, but I'm sorry, I just love your dialogue.
And 'downsizing to live in a barrel'! I believe the correct response to that is 'LOL'.