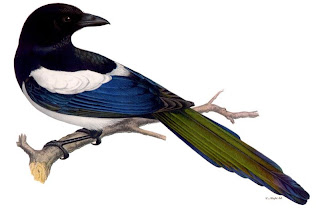 Perhaps it is the uncertain economic situation, (actually it’s not really uncertain, is it? It is certainly bad), or perhaps it is the fact good fortune seems to play a great role in every writer’s career, but I’ve been thinking a lot recently about luck and the talismans people use to draw it to them or keep it, both now and in the past.

I’m a superstitious rationalist. That means although I don’t really believe it makes any difference to my fortunes, I still find myself bowing to magpies, that I avoid seeing the new moon through glass, and that my desk is covered in joyful Buddhas. I suspect I am not alone and can tell you that all of us who are secretly delighted when finding a four-leaf clover will enjoy browsing Steve Roud’s book The Penguin Guide to the Superstitions of Britain and Ireland. It’s a wonderful piece of scholarship, and I have made much use of it over the last couple of years. Handle with care though, if you are superstitious by nature it can have the same effect as a hypochondriac reading a medical dictionary. Did you know, for instance, that you should be very careful of parsley? Transplanting it, or the giving or receiving of a plant is terribly dangerous. You have been warned.

It’s particularly interesting though how many of the talismans mentioned in the book are about warding off witches and / or bad luck, rather than, like my cheerful Buddahs, attracting the good. Reading the book gives the impression of a very worried nation constantly fingering their holed stones, and pouncing on horseshoes to keep off witches and their influence, while taking the occasional break to try and work out who they are going to marry. My current theory is that this emphasis on avoiding bad luck in the past, by which I mean anything up to the mid-twentieth century really, shows us an important difference between then and now. Imagine you live in a time when a minor accident could kill you, or prevent you from working, when a fever could be fatal or a bad harvest could leave your family hungry. I guess in those circumstances it is the bad luck you think about. You would be watchful against it, and take whatever precautions you could. Now imagine you are relatively comfortable, by which I mean you have access to modern healthcare and social services. Perhaps you start thinking how it would be nice to have more, you know, stuff, and you start looking about for it, and therefore buying little happy buddhas to usher it in. Now, I’m not saying that everyone up to 1946 was living in a constant state of fear, human being have always known how to have a good time when they can, but looking at these protective walls people tried to build around themselves is a reminder that it was a more dangerous world. Castles might look beautiful, but they mean you are standing on a battlefield. 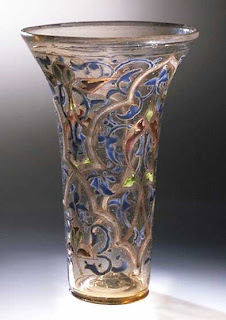 Then there are the gentry level ways of warding off ill luck or preserving the good. Here we are often speaking of rare or very old items around which legends have been built. In Island of Bones I invented a talisman for the town of Keswick called the Luck of Gutherscale Hall, but though that particular item exists only in my imagination, I based its history on a number of local relics. The Luck of Eden Hall can be seen at the V & A, there’s an excellent article about its legend here. Supposedly a gift from the Fair Folk, it seems to have been made in Syria in the 13th century. Equally in Justin Pollard’s book, Secret Britain, which would make a great Christmas gift for History Girls and Boys everywhere by the way, you can read about the Fairy Flag of Dunvegan, fragments of which were carried by MacLeod pilots in WWII for protection. Now when is the best time to look for four-leaved clovers again?

Hmmm... a superstitious rationalist? Me too! I touch wood, wear a crystal and never speak ill of the dead. (Maybe that's why I don't write historical fiction.) Lovely post, Imogen.

Fascinating, Imogen! And, visiting the link to the 'Luck of Edenhall', feel myself trembling for the nerves of the poor footman who used to be ordered to catch it when the Duke tossed it in the air!

What a beautiful thing, and no wonder the superstition that it was fairy-made sprang up.

I had a very superstitious mother (of part-Irish origin) who had so many: you mustn't wear pearls because "pearls bring tears", you mustn't bring lilac into the house etc. etc.

So I am not immune, because of early indoctrination. Hence we have an updated single magpie greeting in accord with the times: "I salute you citizen Magpie - you and your significant other, if applicable."

By the time you have got that out s/he has flown away or been joined by another.

I am so using that magpie salute in future and M, I touch wood so often my partner has offered to get me a wooden ring. Katherine, I actually had a nightmare about being that footman while I was writing. Woke up while the damn thing was still flying through the air towards me...

I'm adopting Book Maven's magpie salute too! Imogen, what a fascinating post and - never mind waiting for Christmas - I've had to order for myself the 2 books you mentioned. I determinedly walk under ladders and yet... For my 18th birthday, I asked my parents if I could buy a ring as my present from them. Mindful that my great-grandmother used to say moonstones brought bad luck (bother - they're so lovely!), I carefully chose an opal ring. That very evening I got terrible food poisoning and was up all night in a pretty poor state. Of course, I then discovered that opals are supposed to bring bad luck and - thinking that the food poisoning might be only the start of it - hardly dared wear the ring. My daughter loves it now. Should I warn her???

Harriet! Don't tell! Superstition is one of those things where ignorance is the best defense. Hope you enjoy the books.

It's OPALS I think which bring bad luck, not moonstones. Better check the books for that one!
But I am v superstitious too and salute magpies and wouldn't dare to change the wording of the greeting I've used all my life. Just think what might happen!
My main 'warding off evil' thing is the Hand of Fatma, which is powerful against the evil eye. I have one I wear on me (tucked into my bra, as I don't want it to be seen..gets in the way of other jewellery) and I have several dotted about my house. Just to be on the safe side. Of course I don't believe in any of this nonsense but hey, better not take any risks!!
I loved this post!

What a fascinating and terrifying post, Imogen! I've never saluted magpies (unless you count 'Go AWAY, you foul thing!' as it drives the robins away from my bird-table) but am guessing now this is Not Good. So that's why I'm not a Booker-winning household name with three Hollywood films to my credit!

But there is a terrible allure in it, and I had no idea how deeply some of these things were entrenched even now. Like you, Harriet, I'm going to have to get those books.

Thanks for posting this, Imogen. You may just have changed my whole life...

A lovely piece on superstition Imogen! Like you, I don't believe in the nonsense, but I also salute magpies and say, "Good day Mr Magpie, and how are your children?" which is the greeting I once heard someone utter. Similarly, while I walk happily under ladders and don't mind looking at the new moon through glass, I can't bring myself to bring lilac into the house which my mother said was unlucky. I don't know why, but perhaps it's associated with death? I remember my then future mother in law sending a lovely bunch of lilac via me to my mother and Mum, trying to remain polite said they could reside in the porch but no further!
Margaret P

Oh my word! Have only just remembered that 'white rabbits' has to be the first thing I say every new year, & this has been a real bind for at least the last 30 years... When I went through a brief phase as a (rather bad) church bell-ringer in my teens I even managed to say it while ringing in the New Year. Does anyone else have this one?

I've a ring with both a moonstone and an opal which I designed.Now I'll have to watch what happens on days I wear it. Having said that... I NEVER walk under ladders or look at the new moon through glass because of hand-down superstitions from my father. But Adele you might like to know in Africa they put a piece of bacon into their bra's. Apparently it wards off stealers of purses! Linda did you put bacon into your Gideon novel?