When I wrote my first full-length novel for children, THE GIRLS IN THE VELVET FRAME, the notion of 'research' never entered my head. I'd taken for inspiration this photograph of my mother and four of my aunts and gone from there. I'd asked my mother what had gone on during this visit to the photographer's studio and she had, oddly, no memory of it whatsoever. That gave me carte blanche. I could make up whatever I felt like.

The main mystery about the photograph was: where was Adèle, the eldest of the sisters and the one after whom I'm named? Where were my mother's three brothers? I turned these questions into a whole plot constructed around the search for a missing brother who's emigrated to the United States of America. I gave the girls the characters of my real aunts, or at least, I made them what I thought they might have been. So the characters were there in one form. I just had to change them from adults to children, a task which I found very enjoyable and in no way complicated.

I had to situate the story somewhere so I used my grandmother's flat in Jerusalem, which I knew from earliest childhood. Indeed, though I didn't know this in 1977 when I wrote Girls, that flat would go on to be the setting of at least three other books.
(BEYOND THE CROSS STITCH MOUNTAINS, MY GRANDMOTHER'S STORIES, GOLDEN WINDOWS) 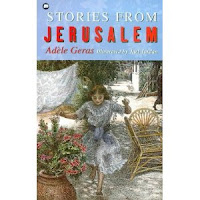 THE GIRLS IN THE VELVET FRAME is set in 1912. When it came out, a few reviewers commented on how well-researched it was, and how full and extensive was my knowledge of Jerusalem before the First World War. They were quite mistaken. I knew nothing, really, and didn't even bother to find anything out because most of the book is set indoors, in one or another bedroom, kitchen or living room. When anyone in my cast of characters ventured outside (they do go on a picnic at one point!) I simply did a mental walk through Jerusalem, which I know very well and eliminated all the modern buildings. What was left I knew I could write about with confidence. An awful lot of the city has been there for 3000 years.

For later books, I've developed a 'one book per novel' style of research which means that my books are probably not as History Rich (like Wool Rich!) as they might be, but I hope that none of them is actually misleading, historically, or in any way anachronistic. I did make a terrible error and had the cooks in my novel ITHAKA using lemon juice with olive oil to baste meat when lemons were unknown in classical Greece but so far that's the only historical mistake that's been pointed out to me. There are probably a great many others.

When I was writing TROY, I watched a good video of an archaeologist walking round the site and explaining what was where. This, together with a reading of the Iliad, was all the research I did. 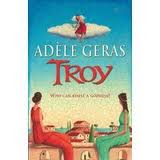 Quite often, research means reading novels set in roughly the same period as the one I'm writing about. As for the place, well, there's the method outlined above and if you stick to places you know, that's fine. But you can also adopt the Stef Penney style of exploration: stay at home and look at pictures and film of the place you're writing about. On the whole, I'm not an adventurous writer and tend to stick to locations I know, but I reckon a good writer could knock up a passable jungle story after reading HEART OF DARKNESS, STATE OF WONDER by Ann Patchett and THE MOSQUITO COAST...oh, and THE POISONWOOD BIBLE. I wonder whether anyone out there is such a research slacker?

PS. When I went through my mother's photographs after her death, I came across this one:

It's of Adèle and the table she's leaning on is the same table to the right of the picture of her younger sisters. She was clearly there all the time while the younger girls were having their photograph taken. It was probably decided that as she was an adult, she ought to have a picture of her own. The back of the postcard is stamped with the photographer's name. The purple letters have faded over the decades but I can still read, in Hebrew: ZADOK (surname unclear) T'salam. Yerushalayim. [Zadok....Photographer. Jerusalem).If I'd seen that picture when I was about to write THE GIRLS IN THE VELVET FRAME, I might very well not have bothered. The initial question: where is Adèle? would have been answered.
Posted by adele at 07:30

Two photographs I scanned in have not appeared...am agoing to go and find out what's happened. Watch this space.

Phew...photos are back, I'm glad to say.

Thanks for the this post Adele. it's encouraging to know books can be written without getting bogged down in too much research.

What a wonderful photograph and what a lovely, inspiring post - and it just goes to show that where fiction is concerned, sometimes we can over-research and then lose touch with the actual story.

And of course the thing about research is that even when you've done it you have to leave almost all of it out.
I love the idea of a mental walk round Jerusalem deleting all the recent stuff. How magical and wonderful and satisfactory.

The photographs are stunning. And your approach to research, Adele, is a breath of fresh air, as I sometimes feel that the frequent-asked question "How much research did you do?" is a challenge to prove the worth of the book by research alone, and that somehow one should have read everything... which would mean ending up like Mr Casaubon, and never finishing!

Lovely, Adele. I adore the best-clothes and solemn expressions. And I am VERY glad you didn't find the second photo first!

I take a lot of heart from this post, since I am currently bogged down in research, which has stopped my novel dead in its tracks.

But I am all for historical accuracy (see my blog The History Lady) and feel obliged to get it right. I've read and seen too much (like the film Anonymous, this week, which boggled my mind so much I had to blog about its inaccuracies).

Perhaps I do not need to obtain the equivalent of an MA/PhD in 16C history in order to write an accurate novel. Thanks again.

I'm with H.M. Castor on the research angle, that there's a terrible danger in a book's merit being judged by its research. And as Sally Prue says, it can actually ruin a book when we stuff in all the research we've got just to prove we've actually done it.

For me, research is a feeble substitute for actual experience, and all the books in the world could never give me your first-hand knowledge and instinctive sense of Jerusalem.

I can't pretend I'm not a fearful research-hag myself, but all it ever achieves is to bring me to the starting gate on a relatively level plain with those who write contemporary - ie I know the world, now I'm ready to write the story.

Story is still what matters, and your post is a brilliant reminder of that.

I loved The Girls in the Velvet Frame!