From the Sketchbook: A World War I Mystery 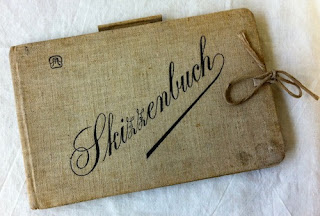 As Remembrance Day nears, I have been spending time decoding an object that is very precious to me. I inherited my German grandfather’s World War I sketchbook many years ago and immediately loved the cover, with its ties and the word “Sketchbook” in jaunty lettering. I pictured my grandfather Helmuth, an eighteen-year-old bricklayer, purchasing the sketchbook before he left home, unaware of the horrors to come.

I must admit that most of the drawings almost disappointed me at first, even though Helmuth’s observation and hand skills were amazing for an untrained artist. They were mainly landscapes and detailed studies of churches. Each was neatly dated and the locations were noted. The place names meant nothing and only a couple of images had any kind of drama. I made a feeble attempt at finding out about the places in the captions and gave up.

Writing for the History Girls blog inspired me to dig out the sketchbook and share a few of the drawings in hopes that readers might be able to shed light on where Helmuth had done his sketching. I began a bit of detective work with the help of the Internet and started to piece together a slim story behind the sketches. 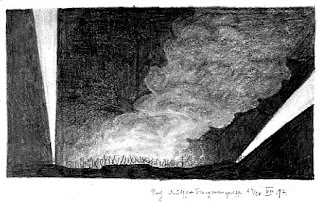 The sketches start in late July 1917 and end in late November. They were not in chronological order so I made a list of them and found that the first sketch, from 27 July, is also the most haunting one of all. The caption translates to “After German air raid”, but there is no location noted. Helmuth must have been someplace with a clear vantage point and enough time to draw this terrifying image. 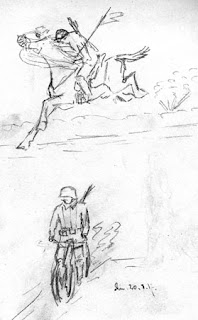 The next sketch is dated 20 August, again with no location. The top image mystified me until I learned that it depicts a rider with an explosion behind him.

There is a gap until early September, when the sketches are marked “Erholung”, which translates to “rest” or “recovery”. The bucolic scenes are empty of people, but seem largely unscathed by war, with one exception. When I discovered that the locations of these drawings (Nonhigny, Harbouey and Gogney) were in the Muerthe and Moselle area of Alsace Lorraine, I wondered whether this was because Helmuth was resting away from the action, behind the German-French border.

There is an infuriating gap after these sketches; the next drawings are dated in November. Helmuth moved from a place called St Loup to Acy Romance and then to the Aisne Canal. The drawings are still well observed but looser and more expressionistic, perhaps a by-product of drawing quickly outside in the cold. 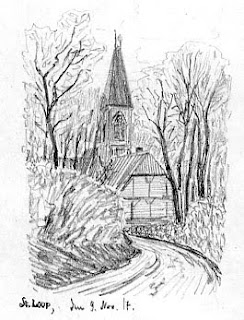 Helmuth’s drawing of the Aisne Canal alerted me that he must have come to the Western Front after his time in Alsace Lorraine. I knew nothing of Aisne until now. From what I have read, its battlegrounds are primarily French places of remembrance, less visited by the British or Americans. Helmuth’s sketches back up its descriptions as a lush, pastoral area, but I now know that there is horrendous carnage and death behind those drawings. He could not have been far from the Chemin des Dames, an east-to-west ridge that the Germans had occupied from 1914 until October 1917, at which hundreds of thousands of men from both sides died.

The last drawing in the sketchbook, dated 24 November, of two men by an open fire is hugely poignant to me. They occupy the same space but are separated by an emotional distance, each lost in his thoughts. In silhouette these men could be of any nationality, seeking warmth and solace. 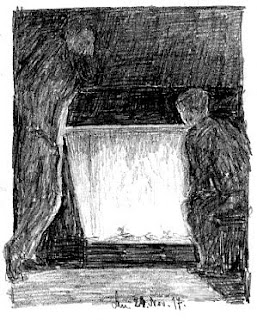 My grandfather survived the war but did not speak about his experiences; our family knows little about that period of his life. I wonder whether he ever looked at his “Skizzenbuch” after he returned home. It could not have been easy to see the air raid sketch again, knowing how many men may have died in that place.

On 11 November I will think of Helmuth, of all those who died and of the survivors whose lives were marred by this war. I will look at the sketchbook and think about how my attitude to it has changed. It is no longer just a collection of landscape drawings but rather my grandfather’s attempt to find some beauty in a war- ravaged land.

If you have any further information or resources you can share with me about the autumn 1917 period of World War I and the Aisnes region, I would be grateful for your comments.

Teresa Flavin is the author of The Blackhope Enigma and The Crimson Shard, published by Templar in the UK and Candlewick Press in the USA.

This story reminds me of 'Between Shades of Gray.' Except, she was Lithuanian.

This was a fascinating post. I hope you find out more!

What wonderful sketches! Good luck with your detective work...

What a brilliantly evocative post. Thank you for sharing the Sketchbook, Teresa, and I do hope you find out more of the story behind it.

Perhaps what makes this especially haunting is seeing WW1 remembered through the eyes of a German fellow-sufferer, a salutary reminder that Remembrance Day is not about any one country, but for remembering all those who died or whose lives were irrevocably damaged. I know that's obvious and everyone knows it, but today your post has really made me feel it as well.

These drawings are marvellous, Teresa - thanks for letting us see them! What did your grandfather do after the war? Did he go back to bricklaying? Did he use his artistic ability? What a lovely thing to have!

Thanks from me too, Teresa, for this wonderful post. It is a privilege to be able to see your grandfather's book - the images are both fascinating and moving. I do hope you will be able to find out more and perhaps report back at some point?

Like Helmuth at the beginning of the war, my daughter has just turned 18 and so I am keenly aware how young this is. There are no words to describe sending all those children into the horrors of World War One. Both my grandfathers fought in WW1. One was gassed and subsequently died of a weakened constitution. The other drove an ambulance and became a buddhist during the next war - despite working for the coal board in the West Riding of Yorkshire. Thanks for sharing these images.

I'm not certain, but if you go to these coordinates in Google Earth: 49 49 27 21.22 N, 4 13 13.91 E, you will find yourself in Saint Loup-en-Champagne on the Rue de La Croix. If you go into street view and look WSW, you will see a view very similar to the view from Helmuth's sketchbook labeled St. Loup. I hope this is helpful.

A wonderful, priceless heirloom--a picture being worth a thousands words. The war to end all wars, right? Not.

I always find it tragic that only 21 years after the Armistice the world was at war again.

What a wonderful object to hold and what a good time of year to show us the images and drawings. Thanks for the post.

Fascinating,Teresa! My grandfather was in the war on the German side, too, but didn't make any sketches. But from a few things he said, later in life, in his letters, he felt life hadn't been good to his teenage self, sending him into that hell.
My German great-uncle Leo had his head blown off at Verdun, something that haunted my mother's childhood nightmares. It feels odd, somehow, as a British person, to think that only my German relatives fought in World War 1.
Thanks for reminding us that remembrance of those who died in war can be about ALL who are sacrificed, no matter on what side, and civilians as well as servicemen.