I (Don't ) Want You Back Catherine Johnson 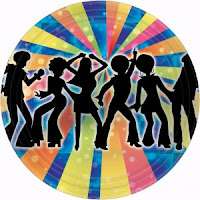 Please note this blog post is set in the 1970s. There are no periwigs, reticules, codpieces or antimacassars. Readers needing a hearty serving of any of the above should look away now.

Yes, yes I know, this is the History Girls...but one day, next year, or the year after, even the future becomes the past. One of the moments that told me I was old was seeing a book in The Museum of London bookshop called 'How We Used To Live; The 1970s'. Gripped with shock, I couldn't even pick it up, but I imagine it was all decimalisation, The Osmonds vs The Jackson 5, and flared trousers. At least that's what I remember. There was also the Queen's Silver Jubilee and Punk, but that was a different, 1970s; greyer than the optimistic, twin-cherry appliqued, early years, tipping into Thatcherism and mass joblessness.

I'm in the 1970s at the moment, writing in 1971, complete with IRA bombs going off in London, smoking carriages on the tube and easy, casual sexism and racism. I'm not saying now is perfect, but I think the political correctness gone mad brigade have forgotten what it was like to be on the end of any kind of ism. Whether you're ignored because you're in a wheelchair (and this still happens often, ask anyone who uses one) or not white, or over a certain age, or a woman, political correctness at least means more people are at least polite to your face whatever their private opinion might be. A bank can't refuse you, an estate agent decide not to sell you a house, or a school can't not put you forward for an exam because of your face.
And that deserves celebration.

Oh dear this has turned into a kind of rant, and not about minuets or bustles or gas lights. I will make sure there's a warning at the top of the page.

And worry not, I will be back in the 18th century any second, I promise. In the meantime enjoy these links http://www.youtube.com/watch?v=Y11mqB7r0Ww&feature=related
http://www.youtube.com/watch?v=_iVWg5T7fXM&feature=related
No contest really...
By the way I have a book out right now, and it's set in the future (2012 year so buy it quick to get maximum time travelling value!). http://www.franceslincoln.com/en/Contributor/4110/Catherine_Johnson.html
Posted by Catherine Johnson at 15:26

Really loved this post, Catherine. I've always been more drawn to recent, social history rather than the minuets,bustles and gaslight version, so I'm looking forward to seeing what you're working on now. And no, I don't want the 70s back either.

Great post, Catherine, and you make SUCH important points about what progress has been made and what things are forgotten (or not sufficiently valued) by those who jeer at 'political correctness'. If this is a 'rant', keep 'em coming - great stuff!

My little girls love love love watching the early Jackson 5 clips. Never tried them with the Osmonds, though...

THANK YOU for saying that about political correctness! I do so agree!

Great post, Catherine. And though I'm a Mick Jagger girl rather than Donny, I just LOVED the clip.