Who is it? by Susan Price 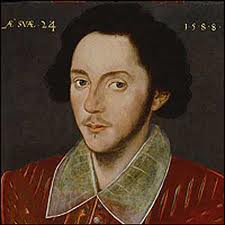 This is the Grafton portrait, which came to public notice in 1907, having hung in the parlour of a farmhouse since the 17th Century. Research suggested it had once belonged to the Duke of Grafton, but, during the Civil War, had been removed to the farm, either as loot or for safety.


Family tradition alleged that it was of William Shakespeare.

The painting is inscribed, in Latin, ‘Age 24, 1588’, and Shakespeare was certainly 24 in that year. It shows a young man dressed in a velvet doublet, slashed to show the rich lining. An unusual touch is that, instead of the expected ruff, he wears a simple – but expensive – collar of fine, almost transparent, lawn.

At the age of 24, Shakespeare was unknown. How could he have afforded these expensive clothes? It’s argued that, an actor, he’d been into the dressing-up box – but that doesn’t explain why anyone commissioned a portrait of an unknown tradesman’s son, and why a Duke owned it. 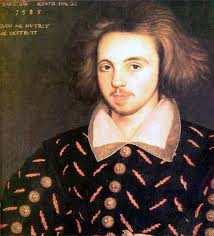 Above is the painting known as ‘The Apocryphal Marlowe’. It came to light in 1953, when repairs were made to the Master’s Lodge at Corpus Christi, Cambridge.  An undergraduate, passing the heap of rubble, saw pieces of painted wood sticking out of the rubble. Investigating, he found the badly damaged portrait of a young man in Elizabethan costume.


The National Portrait Gallery confirmed its 16th Century date, but were unable to identify the subject. The Latin inscription reads ‘Aged 21, 1585,’ three years earlier than the Grafton portrait. The poet, Christopher Marlowe, attended Corpus Christi, and was 21 in 1585, the year he completed his BA and began his MA. Students with money often had a portrait made of themselves at this time.

The Master’s Lodge, in the rubble of which the portrait was found, was later, but had housed earlier portraits. It’s unknown exactly how the painting came to be in the wreckage. Accounts suggest, variously, that it had been known previously, but had not been thought important – or that it had been hidden in a cupboard and forgotten. (There is precedence for such forgetfulness. Ingestre Hall in Staffordshire, now displays an immensely valuable tapestry, which was found stuffed at the back of a small ‘coal-hole’. In Durham Castle, a ‘junk-room’, once cleared, was found to be a forgotten, untouched gem of an early Norman chapel.)

Another theory suggests that the painting was hidden because its subject fell into disfavour. This fits well with Marlowe, who enjoyed a fraught relationship with his college. Corpus Christi refused to grant him his MA because he had not merely been absent during term, but rumoured to have been at the Jesuit seminary in Rheims. Given the religious turbulence of the time this was outrageous.

The college was then ordered, by Elizabeth’s Privy Council, to hand over the MA because ‘it was not her Majesties pleasure that anie one emploied as he had been in matters touching the benefit of his Countrie should be defamed by those that are ignorant in th’ affaires he went about.’

Then, instead of entering the clergy, as any grateful scholarship boy with an MA should, Marlowe became a ‘a filthy Play-maker’ and gained a reputation as an atheist. Shortly after his death, pamphlets circulated, telling how he’d been killed in a tavern brawl, and calling him ‘a Poet of scurrilite’, and ‘a barking dogge.’ They said he ‘cursed and blasphemed to his last gaspe’, that he was killed ‘in a Baudy-house,’ and that, ‘Thus did God, the true executioner of divine justice, worke the ende of impious Atheists.’


So Corpus Christi may well have wished to forget that Marlowe existed. There is precedence for this too. Henry Butts, Corpus Christi master in 1632, worked heroically to relieve suffering during the plague, but later went insane. This was deemed ‘a disgrace’, and his portrait was taken down and hidden.

In both portraits, the sitters are dressed in similar style – the height of late 1580s fashion. It’s interesting that the Cambridge man wears the same kind of simple but expensive lawn collar worn by the Grafton sitter - something not often seen in portraits of the time.

Such an expensive display was illegal, under the sumptuary laws, for anyone below the rank of noble. That doesn’t prove him to be noble, though, since these laws were almost completely ignored. It does mean that, somehow, he had access to money or favour.

It’s been suggested that both portraits are of Christopher Marlowe. They certainly look alike, but, as Blackadder’s Baldrick once observed, portraits are ‘painted to a romantic ideal rather than as a true depiction of the idiosyncratic facial qualities of the person in question.’ All Elizabethans look alike.

And both these paintings have been reworked, by different artists at different times. The Cambridge painting was so badly damaged that the restorer had to guess at the eye-colour. Can they still be said to be of the same man? They have the same facial proportions, the same hair-line, same brow-line, same nose.

So who is he the man in the Grafton and Cambridge portraits? The cautious answer is: ‘an unknown nobleman,’ since his dress proclaims him noble, and no sixteenth century playwright was important enough to be painted. The sober, plodding side of me agrees.

But, but… If the farmers who kept the Grafton for centuries truly believed it to be Shakespeare, and weren’t simply after a higher price – isn’t it possible that their family memory became blurred? By the 18th Century, Marlowe was largely forgotten, while Shakespeare’s fame grew. A vague tradition that the portrait was of a famous Elizabethan playwright might easily become, ‘It’s William Shakespeare.’

At 21 Marlowe, unlike Shakespeare, had the favour of the powerful, and, at 24, had been made famous by his Tamburlaine and his ‘silver tongue’. Could he, or a patron – possibly a besotted patron – have commissioned the portraits?  I learned about the paintings when I researched my book, Christopher Uptake, which is loosely based on Marlowe. When the e-version needed a cover I asked my cover artist (my brother Andrew) to use the Cambridge portrait as a starting point.

So now, for me, at least, the puzzle is solved. The man in the portraits is Christopher Uptake.

Who do you think he is? 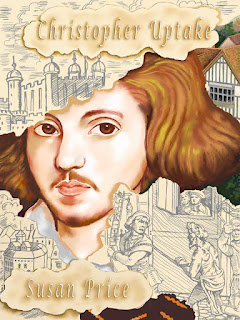 ‘Merry England’, during the reign of Good Queen Bess, was a police state. It was a crime to hear a Catholic mass. It was a crime to be ‘a free thinker’.
Christopher Uptake, a young playwright, is an atheist. In the crowded city, he thinks no one will notice that he never attends church – until the red-haired man appears at his door and gives him a choice: spy on your friends or be tortured and executed.
From then on, Chris plays a desperate game, trying to spare his friends yet save his own life…


Susan Price is the acclaimed author of many novels and collections of short stories. Find the book here.


We are grateful to Susan for this post the first of several by occasional contributors. Louisa Young hopes to rejoin us on 27th April.
Posted by Mary Hoffman at 01:01

Fascinating post Susan, thank you. Unidentified portraits - paintings or photos - are so frustrating! And I suppose it's natural to want to know what our heroes looked like. I'm inclined to agree that there's a close similarity between these two.

Small world! I used to live near Stafford and went riding at Ingestre, which always seemed a very romantic name for a village to me - it took me nearly a year to learn how to pronounce its name ("in-guess-tray", if I remember rightly?)

This is fascinating. Though of course the idea of a painting under rubble & a tapestry down a coal-hole is alarming (and the damage is a huge shame), there IS something so tantalising and intriguing about the circumstances of such finds... Thank you for this great post!

Terrific post Susan. And your Uptake book sounds wonderful. Watch out for THE SECRET LIFE OF WILLIAM SHAKESPEARE by Jude Morgan which is published on April 21st and which has Marlowe in it as well of course....I'm sure you'd be interested in reading that!

Thanks for the top, Adele - I would be interested to read that.
Yes, it is In-guess-tree, Kath. I taught writing courses there. It has one of the few Wren chapels outside London, a beautiful place, with Gibbons woodcarvings.
And Kath Langrish seems to be conducting a long Twitter conversation about these paintings - though the consensus seems to be - if I've understood - that the paintings are of different men, that the cool Grafton is Bill, and the 'hot-eyed' Cambridge is Kit!

Fascinating post, Sue - and, having just read 'Christopher Uptake', I can confirm that - though very dark - it's a great read. I found it extremely hard to put down.

I have a postcard copy of a National Portrait Gallery portrait of Shakespeare - believed, I think to be the only one for which he actually sat - on my pinboard by my desk (I like to keep the best writing company while I work) and it bears more of a resemblance to the Grafton portrait than the Grafton does to the Cambridge - from where I'm sitting. Nice post, fascinating topic.

Thanks for a great post, Susan. We so want to know what they looked like, don't we? In a time where every trivial event in everybody's lives is recorded and people have hundreds, possibly thousands, of photos of themselves, it is hard for us to grasp that such important playwrights would not have had their portraits painted, maybe more than one so we can squabble over authenticity. The Elizabethans were not like us, though. They didn't know that Will Shakespeare would become THE William Shakespeare and Kit Marlowe would be THE Christopher Marlowe. At the time, neither young man was rich enough or important enough to have his portrait painted.

Interesting post! But I don't think they look much alike at all. The first one has a longer, thinner face, and the noses are different. The second face is much softer. And I agree with Sue Sedgwick that the first painting looks like some other paintings of Shakespeare. Anyway, whoever THEY are, Sue, I downloaded Christopher Uptake onto my Kindle last week, not having a clue what it was about, though when I saw the cover I guessed Marlowe. Looking forward to reading it!

Remember the first was painted when the subject was 21, the second at 24 - I think they're very similar, and the softer 21 year-old could easily have grown into a more haggard 24-year old, given Marlowe's notoriously riotous lifestyle! I have been fascinated by Marlowe since I was about 16, and first read the Baines Note (where Marlowe is reported as saying, among other things, that all Protestants are hypocritical asses, and that he has as much right to coin as the Queen of England and meant, with the help of a fellow prisoner in Newgate, to coin French crowns, pistolets and English shillings...) I have always wanted to write about him - so will definitely read Christopher Uptake.