In praise of washing dirty linen in public by Eve Edwards

Forget the furore induced by Fifty shades of Grey among readers and publishers cashing in on women's fantasies.  There is another more potent secret that I want to share with you: fifty shades of whites, otherwise known as 'hanging out the washing'.

I know you were hoping for some great revelation of what makes our female engines tick but spare me a moment to develop my thesis.  I do think this is an age-old (largely feminine?) pleasure.  Did you notice that it even invaded hit film Mama Mia?  Their washing was unfeasibly pretty but it was girl space, a place to party, a place to sing.  I dislike most domestic tasks but a line of washing flapping in a drying breeze gives me a contented thrill.  It's about family and nurturing, I suppose, rather than sex; about getting things done and putting things to rights.  Each item I peg out is an intimate reminder of the wearer marking out their stage in life.  When did my daughter start wearing bras sexier and bigger than mine?  When will the footballing/muddy trousers stage end for my youngest? I can't believe my husband is still going round in that old thing! Note to self - lose it before it reaches ironing basket.  My husband and children do hang out the washing when asked but they don't seem to 'get it' in the same way I do.  Am I alone in this?

And washing watching - are you guilty of that?  Part of the fun of foreign travel is spotting those lines revealing, like the Queen's flag, who is in residence. 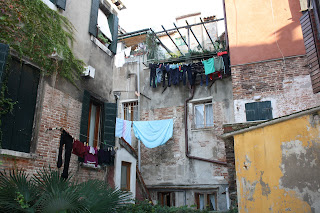 I snapped these lines in Venice - a glimpse into living in a confined space and sharing everything with your neighbours.  But the storyteller in me is always on the look out for those telltale signs of age and youth; wealth and poverty; nappies, lingerie or bloomers.  It is a truer indication of our real lives than any other sign I can think of - even the absence of washing suggests something (i. you don't really live here or ii. you don't care about the environment/have no space so use a dryer or iii. you have a laundry service or iv.the weather is so ghastly your entire house is festooned with socks).  The truth of course doesn't matter to a fiction writer - it's what attitude I project onto the household that interests me.


Practices change over the centuries but it still remains largely associated with women's work.  I'm reminded of the washerwoman who lives downstairs to Marcus Didius Falco, the hero of Lindsey Davies Roman detective series.  She expects you to piss in her tubs so she can use the urine as a bleaching agent.  I imagine she pegged out her laundry very much as the Venetians do today.  In Shakespeare's day there were fields dedicated to drying the washing of Londoners on the south bank of the Thames (you can see them in miniature on the maps).  Washing was a tedious business so clothes were often sweetened with herbs rather than washed and dried but eventually even the smell-tolerant Tudors surrendered their linen. Hence Falstaff's buck basket and the possibilities that presented to the playwright.

By the 19th century a 'laundress' had become a word for prostitute, perhaps because of the association with greater liberty given to the washerwomen, coming and going, dealing with intimate secrets of a family, and possibly also as camp followers. And, of course, historic practice is to belittle or skew anything associated with women. It took children's literature of the Edwardian period to make the washerwoman innocent again in the shape of Mrs Tiggywinkle and even poor old Toad escaping from gaol dressed up as one, though I suppose from the flirting, she kept a frisson of naughtiness for that amphibian.

Blast - it's raining again.  Must dash out and gather in the laundry.  But I'll leave you with some lines from Anna Laetitia Barbauld, who made a mock heroic poem on this subject in 1797 when washing was a communal rather than our solitary pleasure.  It's called 'Washing Day'.

For should the skies pour down, adieu to all
Remains of quiet; then expect to hear
Of sad disasters - dirt and gravel stains
Hard to efface, and loaded lines at once
Snapped short - and linen-horse by dog thrown down,
And all the petty miseries of life.

May your summer be a good one and your washing dry without such petty miseries!

Fascinating post. I've only visited Venice once, as a student, and came back with loads of photographs of washing. It is somehow very appealing - family flags that, as you say, render up all these clues about the inhabitants. It's the first time I've come across London's washing fields, too, though it absolutely makes sense. You've set my imagination off with this subject matter - thank you!

Fascinating seeing it hang out of the windows! I have a balcony where my father set up washing lines for me. Yes, the urine bleach in the Lindsey Davis novels is the way they did it to get togas nice and white. Imagine the pong!

What a lovely post, Eve, and I agree there's something very soothing about seeing washing blowing in the wind. MY mother has a painting of pale coloured sheets blowing on a washing line in our garden in the Dales, with the hills behind. It was done by the girl next door, who went on to become a very good landscape painter, and I must say I love it! But I hate rotary washing lines. Not the same thing at all!

I love this post! Hanging out washing is indeed such a pleasure and I've almost entirely missed it this year, thanks to the jet stream.

There is a bit in Pepys' Diary where he is walking in the garden at Whitehall and sees some of Barbara Castlemaine's frillies hanging out to dry, and says, "It did me good to look upon them."

Guilty as charged - peering at other people's washing, shirts strung high above the streets in the Mediterranean countries, saris spread over bushes in India. (Did the women wear pants, I wondered - they're not on display. So either they don't, or they are too modest to put them on bushes!)

Lovely post. I share your passion for watching a full washing line (or in my case) a rotary dryer - billowing in the sunshine.

I hadn't realised but female characters in my writing do a lot of washing-hanging-out. It's a good place for women to talk to each other and it also reveals character in the way they peg out a shirt or a sheet and fold it when it's dry. And a hero who offers to help and doesn't make a total mess of it - is a good guy!

They're also, as you say, a fine way of observing the habits and styles of a community.

When I had just been born, the midwife came to visit my mother and said she could see all was well because of the line of snowy white nappies on the line!

I included a link to your "delightful" essay on my own blog post today
http://mscomfortzone.blogspot.com/2012/08/some-lines.html
Thank you for posting it. I am in total sync with the sentiments.

When the highly unpopular G8 meeting was held in Genoa in 2001 locals were asked not to hang their washing out so as not to offend world leaders with the sight of their underwear. The whole town responded with displays of knickers on washing lines everywhere.

Really it was an awesome article...very interesting to read..You have provided an nice article....Thanks for sharing..
laundry service London