Christmas is a time of nostalgia, of looking back. It triggers memories of childhood, of the past, both recent and distant.  I was a child in the 1950s. It is odd to think that my own childhood is now history. 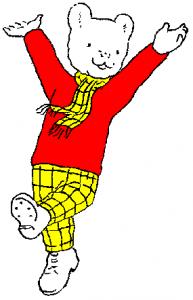 I was talking to a friend recently about our shared passion for Rupert the Bear. Every year I would receive a Rupert Annual as part of my stocking (well, pillowcase to be accurate). It was just as much a stocking fixture as the tangerine wrapped in silver paper, the variety pack and the Compendium of Games with requisite number tiddlywinks and dice (last year's having become somewhat depleted). I loved Rupert and Christmas would not have been Christmas without him. It wasn't until I was much older that I thought about how very strange it was for a bear and his animal chums to be dressed in children's clothes from some undefined era and for them to wear shoes and have human hands (apart from Edward Trunk who has feet for hands and wears shoes - how did he tie his laces?). I knew that Rupert didn't live now, the clothes told me that much. He seemed to live in a lost rural idyll where it always snowed at Christmas and in the summer the beach was littered with star fish and there were dragons  and pagodas and all kinds of wonderful things, if you climbed high enough. 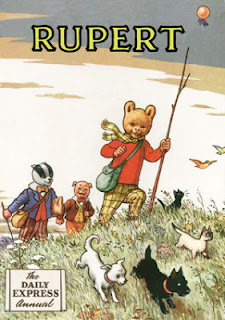 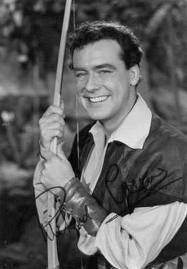 Rupert and his friends had the most exciting adventures and met the most exotic of creatures and I envied him. Even though I knew he wasn't real, part of me hoped he was and that, one day, I might meet elves and fairies and the beings that lived in his world. Rupert would now be regarded as fearfully unPC. There are golliwogs and natives with bones through their noses. What was unexceptional in a world that still clung to the remnants of Empire and unthinking assumptions of white superiority would be unacceptable now. Such things offer insights into time and place; insights into history.

As a child of the fifties, I was much freer to have adventures than children are now. I was talking to another friend (I told you that Christmas was a time for looking back) about the kinds of games we played and it was interesting to note how many were informed by history. I grew up in Warwickshire. We used to play out in the woods and fields, so we would play Robin Hood, Children of the New Forest, Ivanhoe, carrying home made swords and bows and arrows.  She lived by the sea, so her games involved playing pirates on old beached hulks and exploring caves and tunnels to discover evidence of smugglers. Reflecting on this, I realised how much my child's imagination was fired by history mediated through books, films and T.V. 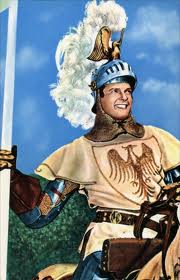 I didn't write as a child. My creative imagination was developed and nurtured through playing games which could be very elaborate and go on for weeks, even months. I remember spending almost a year obsessed by Robin Hood. The games we played were porous. Robin Hood and his Merry Men could easily morph into Wyatt Earp or Jesse James but that didn't seem to matter. We didn't worry about strict factual accuracy. We were attracted to myth and romance. The West was just as much history as the Crusades. In an odd way they seemed to go together.

My lifelong interest in the past began with and was fostered by play and the child's imagination which, in turn, was fuelled by the stuff of a fifties childhood, including the rich mix of English Pastoral, folklore and fairytale that is Rupert.

Oh my goodness- a real blast from the past :) I loved those Rupert Annuals as a kid, and the yearly arrival of a new one under the Christmas tree was an eagerly anticipated event. They were a fascinating mixture of the cosily familiar and the exotic.

This post pushed all my nostalgia buttons. And weren't Rupert's stories told in rhyme, or was that someone else?

Ah yes! Nothing like running around with stirring theme tunes in your head being heroically brave. With sticks and ropes.

I also remember Rupert and his exotic yet cosy world - as well as how I always read the two line of verse but never the text of the story. Wonder why?

As I recall it, there was a couplet that ran across the top of the double page spread, which sort of summed up the story; a quatrain underneath the pictures which gave a slightly more detailed version of the same story; and then a full prose account at the bottom. It was a brilliant system which meant you 'got' the story no matter how much or little you were prepared to read. Gorgeous post, Celia!

'Feared by the bad, loved by the good...' Oh, yes, Sue!
There were rhyming couplets under each frame, Laurie, I never bothered reading the prose paragraph underneath - it took too long, held the story up and wasn't 'right' somehow, although I always felt guilty as though just reading the couplets was too easy and I should be reading the hard bit at the bottom of the page.

Rupert! I love Rupert so much. for a while there, Father Christmas stopped bringing me my Rupert annual, but I put my foot down aged 25 and now, at nearly 30, have convinced my parents to continue to buy me a Rupert annual every year. They often buy me replicas of older annuals which is brilliant, as they're historically fascinating - my favourite is the story where Rupert and Bill find a purse full of little white pills and eat the pills...

I loved Robin Hood as a child too. I grew up in the 1980s and 90s so our games involved riding our bikes, and I used to pretend mine was a horse and try to ride it side saddle like Maid Marian.

Loved Rupert too and read the couplets. Can't even remember the prose bits though I must have read them. I read anything in front of my eyes. And yes, Robin Hood and Cowboys and esp. Movie Stars....we played all kinds of elaborate games which went on for days. I was once tied to a tree and forgotten about for hours. Put this incident in my book OTHER ECHOES!

Rupert Bear was very soon replaced in my affections by P.C.49. I longed for his annuals.

Rupert wasn't part of my childhood, but Robin Hood was, and yes, we played with tree branch bows and swords. I recently bought the boxed set of episodes of the TV series and it still held up after all these years. There was a sense of humour about it lacking in later versions, I think. Nice post, Celia!

Lovely post, Celia - I had a pillowcase at Christmas too - oh, the thrill of waking up while it was still dark and finding that the pillowcase was full! And annuals were great...

This certainly struck a chord! I've just been perusing the Nutwood Newsletter. You too can become a Follower of Rupert: www.rupertthebear.org.uk