HELEN RAPPAPORT is an historian and Russianist with a specialism in the Victorians and revolutionary Russia. Her books include Ekaterinburg: The Last Days of the Romanovs and No Place for Ladies: The Untold Story of Women in the Crimean War. She lives in Oxford. For more information, please visit her website www.helenrappaport.com.

We welcome Helen to the History Girls today with her sadly topical piece about the death of Prince Albert. You may remember Essie Fox's post on this subject last Christmas.

In the history of royal anniversaries, the one that took place last December – 150 years since the death of Prince Albert – seemed to me a perfect tie-in for a book I had always wanted to write. Victoria has been extensively written about and Albert too has had his biographies, but I wanted to take a close-up look at a particular point in their fascinating 21-year marriage, the effect his premature death had on Victoria’s continuing ability to rule and how the British monarchy changed as a result of that.


My book Magnificent Obsession: Victoria, Albert and the Death that Changed the Monarchy was published by Hutchinson on 3 November 2011 in good time, I hoped, for some media comment on what seemed to me to be a significant anniversary. Albert of Saxe-Coburg may have been a relatively obscure German prince when he married Queen Victoria; he may not have been king but only consort; but in every respect, by the time he died he was king in all but name.

Imagine my disappointment, when, aside from some lovely press reviews and thankfully some coverage on Radio 4, Albert’s anniversary seemed to evoke as little interest as ever in the UK, despite the enormous contribution he made to the cultural life of this country. And it is one we are constantly reminded of whenever we head for our great national museums in South Kensington. As a historian and writer I’ve always wondered why we pay so little attention to the life and achievements of the man who devoted over twenty years of unstinting, punctilious duty to the nation as husband and Prince Consort of Queen Victoria. But the fact is that even within 15 years of his death, when the great gilded statue of him was finally positioned inside the Albert Memorial in Kensington Gardens, people had already begun to forget him. As Flora Thompson recalled in her memoir Lark Rise to Candleford: by the 1880s villagers in her kind of rural community saw no visible reminders of him, and only knew that ‘he had been the Queen’s husband, though, oddly enough not the King, and that he had been so good that nobody had liked him in his lifetime, excepting the Queen, who “fairly doted”.’

The simple fact is, that despite Victoria’s concerted campaign to impose blanket memorialization of her beloved husband across the country for decades after his death, Prince Albert has always languished in his wife’s far more imposing shadow. 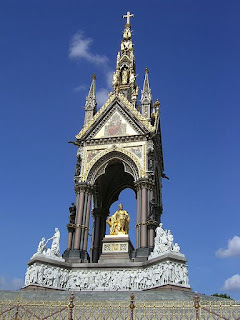 When Prince Albert died at Windsor at the age of only 42, Victoria’s response, as we all know, was to retreat into a state of relentless, catatonic grief that crippled and disempowered her as a woman and which, as the years went by, tainted her popularity as queen, turning the public against what had, when her husband was alive, been a popular monarchy into a deeply unpopular one where criticism of the queen’s dereliction of public duty was mounting and some were even calling for her abdication.

When I was researching Magnificent Obsession I was surprised that so little had been said about the country’s response to Albert’s death – coming as it did only ten days before Christmas 1861. No one had expected it, the official bulletins on Albert saying little to suggest how seriously ill he was at the time. All the papers had gone to press when he died at 10.50 pm on the night of Saturday 14th December, with only a few special broadsheets in London carrying the news the following day. The nation awoke that morning to the mournful sound of bells tolling the news across the country, as people made their way to church. On Monday, 16th the full impact of Albert’s death began to sink in. Florence Nightingale was proved right when she said that ‘the English will value him better now he’s gone’, which is precisely what happened. For days afterwards acres of heavily black-bordered newspaper space was devoted to eulogistic obituaries, all of them now lauding in the most hagiographic manner a man whom few had liked and even fewer had ever known, let alone understood.

For the British people Albert’s death was nothing less than a national calamity of biblical proportions. Churches were festooned with black crape, shops were shuttered, steamers on the Thames stood idle, flags were at half-mast, theatres closed and commerce in the city at a standstill. Everywhere the blinds of private houses were drawn down, the brass plates on doors surrounded in black, and mirrors and lamps covered. Omnibus drivers tied scraps of crape to their whips; in the countryside even the beehives were draped in black, as part of the age-old superstition of telling the bees of a death in the family. Everyone, from the highest in the land to the poorest cottager, donned some form of mourning, even if only a black armband. Across Britain the mourning warehouses were besieged with desperate customers anxious to put themselves and their children into mourning. Stationers’ shops selling cartes de visite of the Royal Family were packed, with copies of the last photographs of Albert selling at wildly inflated prices.

With Christmas only ten days away the government was anxious that the funeral should be held as soon as possible, to allow the public to recover in time still to enjoy the festive season. But as Elizabeth Gaskell recalled, ‘No one wishes each other “a merry Xmas” this year.’ Accounts of the funeral across the press were exhaustive and heartbreaking in their detail. But few people today realize that it was held in private – at St George’s Chapel, Windsor. There was no lying in state at Whitehall to allow people to pay their last respects and the ceremony itself was attended by an all-male congregation. Queen Victoria did not go – she was far too traumatized and could not face it, and Victorian funeral convention at the time generally excluded women, for fear they might break down and make a spectacle of themslelves. 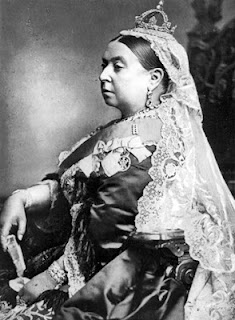 Even though she did not see Albert’s coffin lowered into the crypt, Victoria had at least wanted to stay at Windsor until it was all over. Instead, she was bullied by the royal doctors (out of a totally bogus ‘fear of infection’) into going to Osborne, her house on the Isle of Wight. The chief mourners on her behalf at the funeral were two of her four sons: Bertie, Prince of Wales aged 20 and his 11-year-old brother Arthur – poignant shades of William and Harry at the funeral of Princess Diana. There are further echoes of that other, tragic royal death: then – as in 1997 – people were distraught at the sudden and unexpected loss of Prince Albert; his death, like Diana’s, felt like losing a member of their own family.

Christmas 1861 was an unutterably bleak one in Britain; for the royal family the date 14 December became talismanic thereafter, even more so when Victoria and Albert’s second daughter, Alice, died of diphtheria 17 years later, on the very same day as her father. A century and a half on from Albert’s death it is a shame that history continues to pay so little attention to a gifted and dedicated man who contributed in countless ways to the cultural life of this country. The role of consort is not an easy one – as our own Prince Philip has shown. The ultimate irony, perhaps, is that Albert, who found the role of consort difficult and clearly longed for power, had been building a position of unchallengeable influence at the queen’s right hand that sooner or later would have come into conflict with government. His death, in many ways, saved the monarchy and ensured that it became the figurehead, ceremonial one that we have today.

Magnificent Obsession: Victoria, Albert and the Death that Changed the Monarchy, published in paperback by Windmill.

And Helen is appearing as a talking head in a 3-part BBC2 documentary 'Queen Victoria and Her Children'  that discusses  some of the issues raised in her book. Transmits 1, 2 and 3 January 2013, 9 pm. 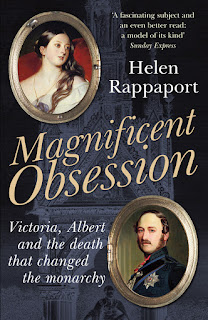 I heard somewhere that, among his other talents, Albert was a gifted composer. Of course, his aristocratic family didn't approve and then he married Victoria and that was that. Poor man. I wonder if that documentary will make its way down to Oz, where I live?

Very interesting - thank you, Helen. There was a rather sweet portrayal of Albert by a young Jim Broadbent in a repeat of Blackadder's Christmas Carol the other day!

A wonderful post and I will be watching that programme about Victoria and Albert as parents. Fascinating stuff.

Thank you for this post. Albert's vision for the whole Exhibition Road area seems quite remarkable. I knew little about until quite recently - certainly an awkward role.

Sad that the anniversary wasn't taken up. Have always been in love with his Memorial!

Albert's death is always spoken of as "early" rather than "twenty years long" so, with Victoria's widowed image prominent, perhaps it's inevitable the poor Consort's great energy is ignored.

Will look forward to the tv programme - and Helen's book.

I loved your book, Helen (my slightly irreverent review here). I don't suppose I'll get to see the TV program this side of the pond, which is a great shame. You certainly put a different spin on the Albert & Victoria legend.