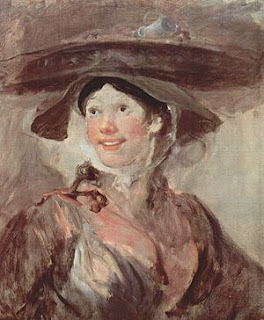 Instead of generic 'desirables', the eighteenth century sees the emergence of the individual in art as never before.  Certain subjects, such as Hogarth's Shrimp Girl fascinate me, as does the male model in the picture from St Martin's Lane Academy life drawing class.  Sadly, the details of the models' identities are almost always lost in the bustle of London's streets, but not Wilson.
Born in Boston, Wilson arrived in London in the summer of 1810.  Arriving in the city, he sustained an injury and visited a doctor, Anthony Carlisle, who also happened to be the professor of anatomy at the Royal Academy.  Carlisle immediately saw his patient's potential, and hauled him into life classes.  Thomas Lawrence was particularly impressed, and declared Wilson 'the finest figure He has ever seen, combining the character & perfection of many of the Antique statues'.  This is no mean praise: 18thC artists, particularly those of the early Royal Academy, studied the figures from antiquity in a mathematical fashion, rather like computer programmers now study the symmetry of models' faces.  Lawrence would go on to compare Wilson to Antinous and Hercules.  Soon, Wilson was earning 2 guineas a week, making him very well off, considering his previous occupation as a sailor. 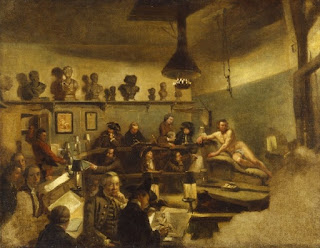 Benjamin Robert Haydon, Wilson's greatest artistic patron, soon took him on for extended periods of time to further study his body and to make the extensive sketches which would inform an entire career.  There can be no doubt Haydon's admiration bordered on the fervent, but his intensive study of Wilson's form is also a delightful commentary on the beauty of the Black physique.  His notes include such gems as 'a perfect model of beauty and activity', a flexibility of the loins 'like whalebone' the fact that he could put his 'foot over his neck' and perhaps the most apposite: 'everything was packed in'.
Years later, Haydon would wistfully remember how, 'pushed to enthusiasm by the beauty of this man's form, I cast him, drew him and painted him till I had mastered every part.'  He did cast poor Wilson, who, up to his neck in seven bushels of plaster began to suffocate and had to be broken out, but not before Haydon had obtained a perfect cast of his subject's bottom.
Sadly, Haydon was not so keen on his model's face, who apparently did not meet the standards of antiquity about the lower jaw and there is no record of his face, either by Haydon, or by anyone else, including George Dawe, who painted the image illustrating this post displaying Wilson in his glory.  After 1811, and the 'buffalo' painting, little more is heard of Wilson but his astonishing physique would have continued to bring in work were he minded to pose.
Wilson's fleeting cameo in Georgian London is too short, and much of what it reveals does not reflect favourably upon the attitudes of artists or critics; he was at once beautiful, yet parts of his face and body corresponded to 'the animal'.  Their admiration is often charming in its candour, then tripped up by its pettiness.  In every modern sense, Wilson was an American man who came to London and made a small fortune in a short time: for him, her streets really were paved with gold.  The image his body created, that of the noble savage, would endure to become an icon for abolitionists.  Until the Nubians of the late nineteenth century harem pictures, his body-type dominated the image of the Black male in British and American art.  The details of Wilson's life may be scant, but we are left with the image of an 'extraordinary fine figure'. 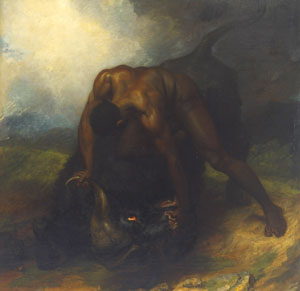 Of course it is sad to hear any human being reduced to their animal attractions, but very interesting that in this rare case it is a man.