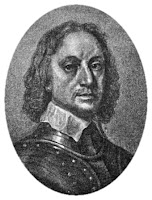 It's not his fault, it's mine. It all began when I was very young indeed and my history education came from the wonderful '1066 and all that," In this version of our island story, the Roundheads were 'right but repulsive' and the Cavaliers were 'wrong but romantic' and I knew which ones I preferred, just from the way they dressed. I've always had a soft spot for snazzy dressers (see my previous post about Marie Antoinette) and Oliver Cromwell didn't stand a chance judged by such frivolous standards.

It's extraordinary how many historical periods one can simply miss out altogether, even with a very good history teacher (Miss Butcher, or DWU about whom I've written on this blog). Unless you're studying history for A level, vast tracts of time just don't get looked at, and you have to pick up what you can from books, other people, representations on television, movies etc.

So what, without recourse to Wikipedia or any scholarly tome, but just from my general knowledge, so to speak, do I know about Oliver Cromwell? He had warts. He told a painter to paint him 'warts and all' and that phrase has entered the language. He signed Charles I's death warrant. He sat in various parliaments as an MP for Huntingdon and later for Cambridge. He did a lot to make Parliament into what it is today. He put down rebellions in Ireland with spectacular cruelty. He persecuted Catholics. There was something about his head...

From looking at Wikipedia, I discover that he lived briefly in Ely and his house is now the Tourist Information office. 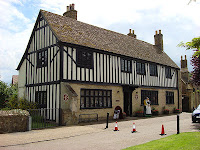 He is descended from Thomas Cromwell;s family through Thomas's sister, Katherine. Some years after his death and burial in Westminster Abbey,after his state funeral, there was a king on the throne of England again and he was disinterred and his body beheaded and treated appallingly and his remains now reside in Sydney Sussex College in Cambridge. There seems to be online controversy about his head, ..... There are, surprisingly,lots of representations of him in popular culture. He's depicted in a Howard Brenton play by Douglas Henshall. Dominic West played him in a series called The Devil's Whore on television. Antonia Fraser has written a book about him. I feel I ought to be more interested and engaged but somehow I am not. Of his distant relative, Thomas Cromwell, I can never read enough, but Oliver still remains for me, a closed book. If Hilary Mantel ever wrote about him, I might change my mind but for now, here he is, warts and all and not my favourite historical character by a mile.
Posted by adele at 07:00

Yes, hard to love when set beside the romantic and dashing traditions of the Cavaliers, but he's a fascinating and complex character really! And he did love his horses and dogs too ...

He's someone who's a mystery to me too, Adele. There were certainly gaps in my history so I wonder if Cromwell & the Civil War was just such a troublesome subject that it was avoided? Did 19C worry about revolution and rebellion among the masses push that period off the list of "what was history" other than the return of monarchy with Charles II? Was Cromwell "big" in history studies in the riotous 1970'S?