When I was young, my mother told me that I was very lucky to live in England because the people of Scotland had no fun at Christmas: for them it was just another day.  According to my mother, they kept their celebration for the New Year, and that festival was no match for our orgy of food and garish plastic the week before.  Years later, I married a Scotsman and found out how wrong she'd been.  As children, hundreds of miles apart, we had simultaneously twiddled the knobs of our new Etch-a-Sketch machines and wondered at the technical ingenuity of The Magic Robot as we scoffed mince pies in a sea of torn wrapping paper on Christmas morning. 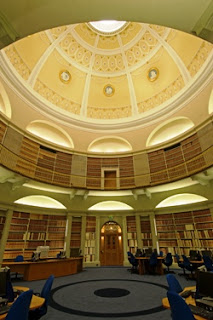 The image of the dour Scottish Christmas goes back a long way, and a little light is shed on it by an exhibition of documents I visited the other day  in the wonderful Robert Adam rotunda of Register House in Edinburgh.


'Exhibition' is rather a fancy word for the tiny display, which takes up  a single glass case, but I want to share its charming selection of Christmas vignettes with you.


First, to those drab times: which of course are associated with John Knox and his ferocious followers, who, in the 1550s and 60s, prefigured Cromwell and the English Puritans with their attacks on Christmas celebrations for their 'popish' and pagan associations.

Quite how much success they had in suppressing the festivities is unclear.  One of the documents in the exhibition shows how, in December 1574, St Nicholas Kirk Session in Aberdeen admonished fourteen women for plaing, dansink & singin off fylthy karrells on youll day.
So, as so often, the official line on how people should behave and what people actually did were rather different.

A letter from 1694 shows that, more than a hundred years after Knox;s death, the Church of Scotland's opposition to Yuletide celebrations was both persistent and flouted.  Alexander, Lord Montgomery wrote to Sir William Cunningham of Cunninghamehead:

The exhibition jumps forward to the twentieth century with  a marriage register open on Christmas Day 1936 to show the entry for the wedding of Jean Christmas McCormack to Gilbert Reid. The label suggests that many Scots were married on Christmas Day because it was one of the few days in the year that they didn't have to work.
[I find that a little hard to understand, as Scotland has far more local holidays than England, and if all the shops and restaurants were open on 25th December (as I'm told they were) who was serving in them? But we'll let that one go for now].

The sign below the marriage entry notes that. since 1855, when civil registration began in Scotland, seventeen people with the first or middle name 'Christmas' appear in the Scottish registers of births, marriages or deaths.  Many of them were born on 25th December.  Two of them had the surname 'Carol'.

Older readers of this blog may remember the controversial lawyer, Christmas Humphreys, who led for the Crown in many famous murder trials, including the Evans/Chrisite, Ruth Ellis and Bently cases and went on to become a controversially lenient judge.  Despite his name, he was also one of the UK's most prominent Buddhists.


But back to the Register House documents.  They show that 'Christmas' is also a surname.  Since 1855, forty-five babies have been born into 'Christmas' families in Scotland.


So despite the cliched image of the repressed Scottish Presbyterian - most touchingly reinforced in the breach by a picture many of us will have received on Christmas cards this year - it seems that Christmas in Scotland has never been the cheerless day that I was led to expect.  Even in the late sixteenth century, a Kirk Session was complaining about playing cards and dice, masked dancing with bells, selling  yule loaves, cross dressing and 'extraordinary drinking'.

I hope your family, like mine, is keeping those traditions going today, though you may want to draw the line at singin off fylthy karrells in front of the children.

Here's to a wonderful New Year for the History Girls and all who read the blog.

PS: Many thanks to all who have been in touch about the eye trouble I mentioned in my last blog here.  The good news is that, at least on electronic devices, reading is becoming a pleasure again.  I downloaded Great Expectations to re-read before seeing the new film, only to discover that I had never actually read it in the first place, and that - as you all know - it is one of the best books in the world!

Please look out for my new book, The Last Minute, published on January 3rd.

Goodness, there were two poor babies stuck with the name Christmas Carol? What were their parents thinking? Goes to show someone Scottishhad a weird sense of humour, anyway.;-) hope you're having a great holiday and thanks or te delightful post.

PS That dome looks very much like the one in the State Library of Victoria, which was, in its turn, based on the British Library Reading Room.

Enjoyed this very much, but it puzzled me, as the Scot I hang out with reports that in his childhood - in Fife - Christmas was pretty much ignored. His father went to work as usual, and he remembers very little being done to mark it out from any other day. But Hogmanay was a big knees-up. And though church-goers, they weren't what you'd call hard-line puritanical. Christmas, he tells me, just wasn't important.

Love this post and very glad your eyes are better! And yes, GExpectations is one of the very best. Happy New Year to you and all who read this blog.