The Town Waits, by Laurie Graham

When I was a little girl our Christmas cake, baked and iced by my mother according to an invariable schedule, was decorated with five little plaster figures, muffled up like carol singers. 'They're the Town Waits,' my Mum explained, but she could never tell me what they were doing or why. 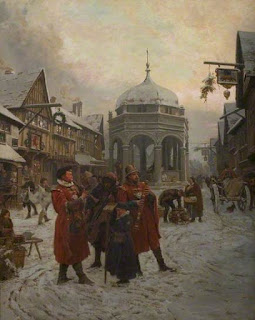 This painting of the Leicester Town Waits by Henry Reynolds Steer is a real Victorian confection. The market cross, at the junction of High Cross Street and High Street, was gone by the 1830s. And the musicians, in their gorgeous livery? Well, one of them appears to be playing a viol, an unwieldy instrument for a strolling player. The Waits generally used wind instruments, a bit of percussion, and of course, their voices. Still, it is a lovely painting.

So what do we know about the Waits? Lots of towns had them. Their name was probably derived from a shawm-like instrument called a wayte-pipe. Their civic role is harder to trace precisely but there are some clues. When towns were still walled, with gates that closed at night, there was always a watch-keeper with a horn, to sound the alarm if danger approached or to signal the arrival of a VIP.

Then there were processions, so important in the Church year and also for a city's sense of grandeur and theatre. Eventually a small band of musicians were put on the payroll, to be on call. It was by no means a full time job but they were paid a retainer and given a uniform to wear. By the 16th century the Waits were doing more than processions. They were also calling the hours, particularly in the long dark nights between All Saints and Candlemas. 'Four o'clock and all's well.' It would have been a comforting thing to hear, though I imagine the occasional window must have been flung open in anger. 'Four o'clock and all was well till you woke me.'

The instruments used by the Waits had wonderful names: the cornamuse, the gemshorn, the rackett or pocket basson as it was sometimes called, the crumhorn, and a small goatskin drum called a naker. And the most portable instrument of all, the human voice, calling the hours and singing, as required.

The Leicester Waits were disbanded in 1947, the year I was born, so I never got to hear them. Their funding cut off in an act of post-war austerity, I suppose. But my mother's aunt remembered hearing them when she was a child, singing 'Past three o'clock' in the weeks before Christmas. There are many perfect recordings of this old carol, mainly sung by angelic choirboys, but I think this one best captures the sound of street music, and as it comes from the Chieftains' album Bells of Dublin and Dublin is where I now live, it seems doubly appropriate.

Now there is good news and bad. The bad news is that my mother's little plaster Waits figures have disappeared. Tossed out in some ruthless spring clean, no doubt. I would so love to have them. The good news is that Leicester reinstated its Town Waits in 2002, and the position is currently held by the Longslade Consort. I guess I'd better go back to my old home town to hear them.

Pure nostalgia. I sang that at school. And like you, although Leicester is the city of my birth and U haven't been back for over 20 years, I have also never heard of the Town Waits there. I shall have to ask my mother (86) who may have heard them although she has never mentioned them.

What a lovely post! I used to make Christmas cake to an invariable schedule but have stopped as I'm the only one who eats it..and I mustn't!

I've read this just as I'm about to go and collect a daughter from her Christmas job at Waterstones ... that is going to prevent her from busking Christmas carols on Christmas Eve in Leicester for the first time in several years. She's a trumpet player, and, together with friends on other brass instruments, they've made stashes of cash from generous last minute shoppers, all fuelled by hot mince pies and drinks supplied by the shops in Market Street in recent years. So some traditions carry on, albeit in a slightly different guise.
Happy Christmas!