A Kid, Two Farthings and The East End at My Feet Catherine Johnson

I'm moving after 30 years in the same house in East London. And although I was born a few miles north of Bow Bells I thought I'd say goodbye with some of my favourite East End book covers. When I began I thought I'd be more wide ranging, drop in some history I books I like, The Blackest Street by Sarah Wise, for instance, and Mayhews's London Labour. But then it became clear that there are an awful lot of books set just around one street. Brick Lane. And not just the obvious ones either.

Brick Lane is the street in Spitalfields that has seen everything, refugees from all religions and nations, wealth and poverty and at the moment, wealth again, so I've stuck with it. It's a street that has changed just while I've been here, especially from when the brewery was a huge and working presence and when the fairground people wintered by the railway, ooh, and the Opticians on Cheshire street where a man, a dwarf, would stand in the shop window fixing and fitting  plastic framed glasses by turning them over a bunsen burner. When I tell my kids that they still think I'm making it up.

The only real constants are the Beigal shops cheek by jowl up at the top by The Bethnal Green Road. So have a look at the books and next time you're there have an Onion Platzel and think of me... 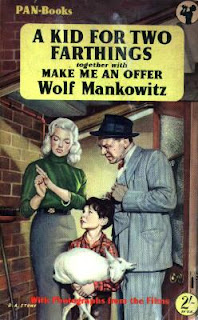 This is my first, a wonderful twentieth century fairytale about dreams set in and around post war Brick Lane. It's a world of boxing gyms,  tenements, absent husbands, schmutter factories, and wise and philosophical old tailors. Little Joe spends all his money on a tiny kid with one horn, believing it might just have the power to make the dreams of his mother and his best friend Mr Kandinsky the tailor, come true.

I never thought it was a children's book really. And as it's at the bottom of one of our endless boxes of books that are packed and ready to go I suppose I won't find out. It felt too lyrical and sad.

This cover is the film tie an and it's utterly brilliant. I think the film is definitely worth seeing, it's by Carol Reed and stars Celia Johnson as the struggling East End mother (!!) alongside Diana Dors and David Kossoff. 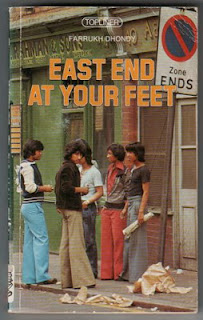 East End At Your Feet. It's the same streets with the same problems,
but this time I think there is less hope. There's already a kind of nostalgia in A Kid For Two Farthings which is missing in Dhondy's short stories of hard young lives in Whitechapel. I suppose there are some books for adults that deal with the area in more recent times, but this is set just pre Bangla town. On a Sunday there are National Front newspaper sellers and the whole area is on its knees, unwanted unloved, and empty. These stories are pure capsules of history. 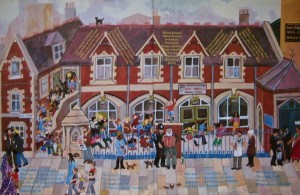 This last picture is a bit of a cheat. It is of Brick Lane, Christ Church school, the tiny Victorian Building squeezed next to the Seven Stars pub. It's from a book of nursery rhymes called Mother Goose Comes to Cable Street, by Rosemary Stones and Andrew Mann, with paintings by local artist Dan Jones. This was painted in the late seventies, but the pictures are glorious.

Posted by Catherine Johnson at 07:42

That's a wonderful cover, the top one! So nostalgic! Wherever you're moving, Catherine, I hope you'll be happy there!

Kicking myself for not including Krindlekrax! I know it's Columbia Road but hey ho. It's a wonderful magical book and like a lot of Philip Ridley's work is set in a recognisable late 20th early 21st century East End. I LOVE Scribbleboy and Dakota of the White Flats. And yes the cover totally sells it Kath!

What a fascinating look at how books can chart the changing nature of an area. Where you going? Will you still be able to hear Bow Bells?

Wishing you happy times in your new home, Catherine! And that you'll find some history there too.

OMG - just blogged on ABBA about a kid for two farthings and new book about Mankowitz! Great minds think alike.

Hope move goes really well. Loved the blog. I got A Kid for Two Farthings year before last from a second-hand shop, on holiday, and adored it. The East End is an amazing place.

Been away abd bot seen the comments or, Miriam, your piece about AKFTF. Am off to the south coast for a sea view and fresh air - Hastings Penny! We're back this weekend (got the mattress delivery date wrong) but will be up and down between now and the end of the month. love cx