From Tyrol to Silesia; persecuted Protestants, by Leslie Wilson 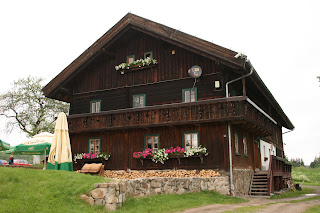 If you go to the Polish village of Mysłakowice in Silesia, you might be rather surprised to find, among the other houses, some chalet-style houses that seem to belong rather to the Alps than to Poland. There are also some nearby, on the outskirts of the village of Sosnówka.


These houses were built by a group of Protestants who were expelled from Zillertal, Austria, in 1837, (hence the German name for the village: Zillertal-Erdmannsdorf) and according to my mother, we were descended from them via her grandfather, Gustav Rösel, who lived in Giersdorf, Silesia, nowadays Podgórzyn. Rösel is not one of the names of the emigrants, so if my mother's story is true, it may have been my great-great-grandmother who was one of this group. Frustratingly, I haven't managed to find out her maiden name: it's particularly difficult, since many of the records were destroyed at the end of World War II. I contacted the organisation of the Zillertal descendants, but they weren't able to help me.

The Zillertal people first came into contact with Protestantism during the seventeenth century in an atmosphere that linked religious radicalism with political ferment; the German peasants' revolts of the time, the sect of the anabaptists, and general discontent at social injustice. Catholicism, in Austria, was linked to authoritarianism and absolute monarchic rule. Reading the Bible, for yourself, coming to your own conclusions about what it meant, defied that authoritarianism.

But the Zillertal Protestants didn't at first openly challenge the authorities; they quietly read the German Bibles they had bought on their travels into Protestant lands, selling leather goods,cattle, scythes, gloves, and so on. Some Zillertalers travelled as far as Hamburg and Amsterdam, where they set up small settlements. Without clergy, sharing the tasks of ministry among themselves, they lived as they thought was right. That isn't to say that there wasn't conflict in the valley. In many cases, family members disagreed about religion; some being Protestants, some Catholics and there could be tragic disagreements among them.


When Emperor Joseph the Second (the one who is caricatured in the film 'Amadeus') issued his 'Patent of Tolerance' which made it possible for many Protestant groups to practise their religion in Austria, it did the Zillertal group no good, because they didn't qualify for tolerance. They needed five hundred members, but only had four hundred or so. As a result, they were persecuted.

In the days before the Internet, the only information I could find out about them was in a book written by a Jesuit priest in the 1950s, which I read in the British Library. This Father was an excellent advocate for the Zillertal Protestants, because he was so biased against them. They 'disrupted the last rites for the dead,' he said. Sounds bad, doesn't it? This is the example the Jesuit gave. Dying Protestants had to put up with the priest coming and disturbing their last hours by telling them they were bound straight for Hell, and trying for a deathbed conversion. On one occasion, a man seemed to be giving way, whereupon his friend, who had managed to stay with him, said 'Sei Stad.' (Be firm). For this the friend was brutally whipped. This is the Jesuit Father's story, and he thought those two words counted as 'violent disruption.'

They were not allowed to inherit land, or to rent it, and also their marriages were regarded as invalid, nor were they allowed to be buried in any kind of religious graveyard. Savage punishments for persisting in their faith were common, though at other time the priests tried to wheedle them into conversion.

Eventually, they were given the choice: either renounce their faith, or be expelled as 'irreligious sectarians' (an ironic description, really.) They were forced first to be subjected to six weeks of Catholic religious teaching and a four-month 'cooling-off' period, before they could go. Only seven of the group were converted. The rest decided to go. This tore some families in half, and the decision must have been agony for many. Besides, they would be leaving their beloved mountains behind, and the way of life they knew so well.


To give the Austrian government their due, the Protestants were not simply expelled into the world with nowhere to go. The Emperor's minister Prince Metternich negotiated with the Prussian King to take them in, and they received the immigration permit on the twentieth of July 1937. The spokesman of the Protestants wrote to the King, very movingly, thanking him for his generosity, and asking him to settle them somewhere like their own mountain home, used as they were to agricultural work. In fact they were settled in Lower Silesia, in the foothills of the mountains the Germans call the Riesengebirge, and which are called the Karkonosce in Polish and Krkonosce in Czech.


It wasn't easy for them to make the long journey, nor was it easy for them to settle, once they arrived. In the first year, they couldn't get a harvest from their new farmsteads, nor did they have, in the first years, the right knowledge of the different conditions in the north. Disease cut some of them down, and some did actually return to Austria. Protestant aristocratic ladies made a charitable cause out of them at first, which annoyed the local farmers and labourers, many of whom were heavily taxed by their overlords in a near-feudal system and were not considered worthy objects of charity by the gentry. The aristocrats were later dismayed and annoyed when the incomers, instead of remaining eternally grateful, started to agitate against inequality as they had in their homeland 'they were never satisfied' my Jesuitical friend complained. My great-grandfather was a Social Democrat incidentally, as was my grandfather up till 1933 (but more of that next month).


After World War 2, the descendants of the Zillertal Protestants were of course expelled from Silesia along with almost all the German population, so their years in Silesia numbered little more than a hundred years.

Whether or not I ever find out which of the emigrant families we are descended from, the legacy of that family tradition has been very important to me; the idea of seeking out the truth for yourself, and not being bullied into believing what the authorities tell you you must believe. When I campaigned against nuclear weapons in the 1980s, even carrying out two acts of civil disobedience, for which I was prosecuted, I think the shadow of those 'stubborn' people were there, encouraging me. I would certainly think the tradition was part of what led me into the Society of Friends. I have good reason to salute them and to be grateful to them.

There is a typo in this blog, which I only spotted this morning and for some weird reason my iPad won't let me edit it, and don't have access to my computer. It should be shadows, not shadow, in the last paragraph. Apologies! I will correct next week.

What a fascinating background you have, Leslie!

Fascinating, Leslie. Thank you. I love this blog, I learn something every day.