Here we are, March 25th already.  It's Lady Day: the Feast of the Annunciation, and the source of all sorts of traps and trouble for generations of historians. 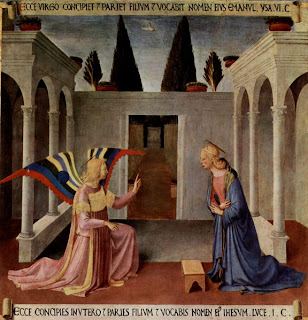 Until the mid 18th century, this was - for official purposes - New Year's Day.  For long after that, it was the traditional date on which deeds were signed, rent paid, and indentures activated.  It is the reason our tax year starts on April 6th (allowance having been made for the transition from the Julian to the Gregorian calendar in 1752, when Britain 'lost' 11 days).
Anyone studying letters and diaries from the Early Modern period will be familiar with the problem of dating documents written between January and March. Some scribes helpfully straddle the social and administrative years: changing the date on January 1st, but writing (say) 1697/8 in the months before Lady Day. But when only one year is given, we can't know whether the writer is sticking with the 'old' year, or anticipating the 'new’. It could be either. Only context can help us establish exactly when something was written. 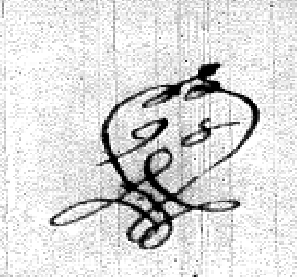 Even secondary sources can be a problem. Some historians adjust to start all years in January, and/or to match British dates from before the calendar change with those on the continent (where the Gregorian calendar was already in use). Some don't. Until recently, it was not usual for authors to state their policy.
I was going to say more about all this, but while I was cruising the Internet for Lady Day facts, I came across the news (to me) that March 25th 1782 was the birth date of Caroline Bonaparte, Queen of Naples. 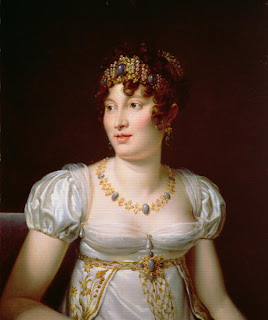 I had never heard of her, but after a quick trawl of the Web, and a skim through her granddaughter's memoir, I would like to know more.  It's quite a story - and it ends with an unexpected Scottish link.
Caroline was Napoleon's youngest sister.  At first a friend, but then an enemy of the Empress Josephine, she married one of Bonaparte's most flamboyant and successful generals.  Caroline was 17, and awash with love and lust, when she wed Joachim Murat in 1800. 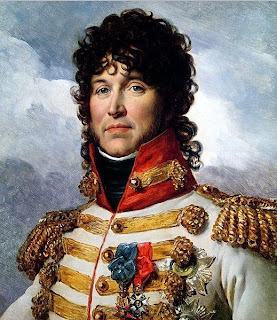 Napoleon described Murat as the bravest man in the world, and rewarded his many military successes with a shower of titles, culminating in the crown of Naples in 1808.
Whether Caroline or Murat was the more dynamic political operator is a matter for debate.  Their relationships with each other, and with with Napoleon and his enemies, fluctuated - with passionate entanglements and rifts in all departments.  Murat came to a sticky end as Napoleon's authority crumbled, and he posthumously became a hero of the Risorgimento. He features in Tolstoy's War and Peace, and Napoleon is said to have blamed the defeat at Waterloo on his rejection of Murat's help. The memoir written by Caroline's namesake and granddaughter tells of a life of extravagance and intrigue. Murat's wealth was immense.  Among his possessions was the Elysee Palace in Paris. 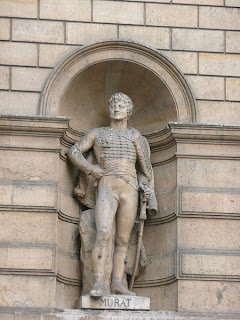 Defeated by the Austrians, and sentenced to death by firing squad in 1815, Murat is said to have faced execution courageously, but with enduring concern for his good looks. Tradition has it that his last words, as he refused a blindfold, were, "Soldiers! Do your duty! Straight to the heart but spare the face. Fire!" 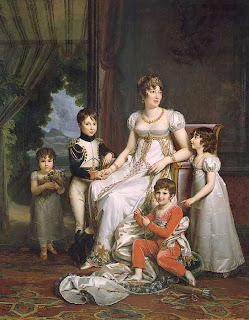 Having fled to Trieste, where she called herself the Comtesse de Lipona (an anagram of Napoli), Caroline survived, and remarried.  Her second husband was the intriguingly named Francesco MacDonald, another character of whom I knew nothing until this week. As far as I can make out, he belonged to the same Jacobite family that produced Flora of 'over the sea to Skye' fame.
Caroline and Francesco ended their days in Florence.  When Caroline, now widowed for a second time, died in 1839, her servants organised the systematic looting of her fabulous possessions. Her children had by then dispersed; some to exile in America, where Caroline has descendants today. I wonder whether they know that this is the 231st anniversary of her birth.
Anyway, Happy Birthday, Queen Caroline, and Happy Lady Day to you all.

I never realised that was the reason why the tax year begins & ends when it does! Thankyou! And Caroline and Murat - what characters! Love those portraits.

Have just come across Lady Day for the first time in the book Adele recommended– John Saturnall's Feast by Laurence Norfolk. How odd! But thank you for the fascinating post and introduction to new histories.

I am constantly astonished at how complex history is and how challenging the effort of researching it. Queen Caroline sounds like a character worthy of at least one book, if not two!

Well said..I am exactly looking for the same post that I have got at your blog, I am not sure if someone can let me know, is their any way to book Escort Doha
http://www.Callyourescort.com/es


hello,
dear
Lately, men are becoming a lot more aware of the importance of male enhancement products in their life. The use of such products is gaining popularity mainly because numerous men nowadays are confronted with a lot stress which has somehow affected the relationship they've got with their partner.
see more details: Biomanix


There are a few different options available to help you get a bigger penis naturally. You should not even consider getting penis surgery until you have explored these options fully. Various methods are available on penis Biomanix male enlargement. Biomanix


The expenses are sensible for the best quality level fixings you’re getting, so organize before it’s all gone.For more information: Biomanix review


hi,
When you have a problem and there are so many solutions to the problem, how do you know which one is going to be the best?
See more at: Biomanix

I definitely enjoying every little bit of it. It is a great website and nice share. I want to thank you. Good job! You guys do a great blog, and have some great contents. Keep up the good work. chaturbate