I first set foot in this (normally much more crowded) square when I was twenty, on the month in Florence that has shaped so much of my adult life and sensibility. I wasn't much less innocent than Lucy Honeychurch but fortunately witnessed no stabbing.

However, a violent death is commemorated in the Piazza della Signoria and tourists walk over the spot where it happened every day; not all of them stop and read the words on the memorial. 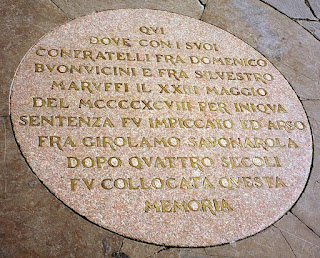 "Here, where with his fellow friars Brother Domenico Buonvicini and Brother Silvestro Maruffi, on the 23rd May, 1498, because of an unjust judgment, was hanged and burned Brother Girolamo Savonarola, was placed this memorial after four hundred years."

Although he was hanged before being burned, Savonarola (and his fellow friars) were still alive when dropped into the flames. As well as the ropes that hanged them, the friars hands were bound; the flames burned through the rope round Savonarola's right wrist and his hand appeared to rise in blessing.*

The three died convicted of heresy, Savonarola having been excommunicated by the Pope the year before. But his teachings have not died out and he has even been considered for Beatification by the Roman Catholic Church. 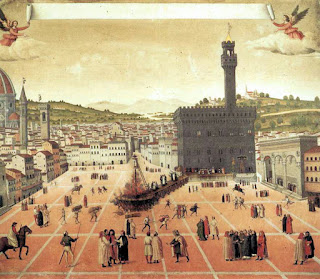 This is an almost contemporary painting of what many consider the martyrdom of Savonarola and his fellow-friars in the Piazza della Signoria, where the circular plaque above now sits.


Less than sixty years later, three more martyrs were burned for heresy and a memorial placed hundreds of years later. It happened in Oxford, my nearest city, and the victims this time were Protestants, tortured and executed by "Bloody" Mary Tudor. 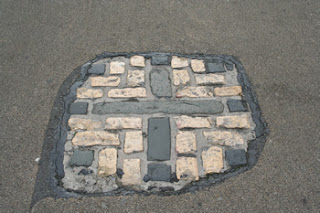 This humble cross of stones marks the spot in Broad Street near enough to where first Hugh Latimer and Nicholas Ridley and, five months later, Thomas Cranmer, Archbishop of Canterbury, were burned for their faith in 1555 and 1556. It was not until the 19th century that the Gothic Spire of the Martyrs' Memorial in St. Giles was raised. 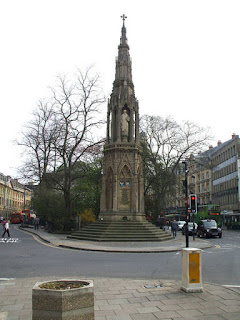 It was recorded in John Foxe's Book of Martyrs (2nd edition 1563) that Hugh Latimer said as he burned, "Play the man, Master Ridley; we shall this day light such a candle, by God's grace, in England, as I trust shall never be put out." It sounds remarkably well-composed for someone dying in agony.


Oxford is full of memorials to the three martyrs for Anglicanism. The tower you can see in the top right corner of Foxe's engraving is that of St. Michael at the Northgate in Cornmarket, where the door of the cell that housed all three men before their trials and death is said to be displayed. I must go and see it. Likewise this stained glass window:

It is in Christchurch Cathedral and commemorates all three martyrs, even though it is known as the Cranmer Window. They didn't die together but they are remembered together, unlike Savonarola's fellow-victims, whose names are not as well-known as those of Latimer and Ridley.

I never go to Florence, where I shall next be in April, without visiting Savonarola's plaque. I disagree with him about a lot of things, including Lorenzo de' Medici, the Bonfire of the Vanities etc. But his torture and death still move me and he must have been a powerfully charismatic figure. (I wrote about his followers in David, 2011).

The Martyrs' Memorial in St Giles leaves me cold but I do try to visit the little cross in the ground in the Broad as often as I am in central Oxford - I find it intensely moving.

*This information was provided by self-confessed "Savonarola-nerd" Anne Rooney.

That memorial was pointed out to me by student of history of art when he gave me "a guided tour of the things people do not usually notice". How right he was!

A very moving piece. The cruelty of humans to each other never fails to shock and sadden me, especially when it's carried out in the name of a loving and forgiving God. Religion seems to have a way of bringing out the very best and the very worst in people.

What Karen said....I will look for that cross in the Broad next time I'm in Oxford. Very interesting post.

Hey, I'm a 'Savonarola-nerd"! Goodie! I go more often to Ferrarra where there is a brilliant statue of him and a round plaque that commemorates his birth and that he was 'arso in Firenze' which somehow manages to get the tone of snarking at Florence (quite right, too).

Every time I go to Venice I light a candle in Zanipolo for Marcantonio Bragadin. we all have our favourite martyrs...

What is it about institutions that preservation of what was is so much more important than examination of what might be that murder is acceptable?