Silent as the Grave - Celia Rees 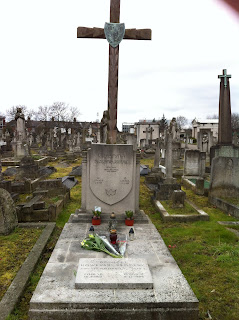 Last Sunday, my daughter and I went on a pilgrimage to Kensal Green Catholic Cemetery to lay lilies on the grave of Krystyna Skarbek (nom de guerre, Christine Granville) a Polish agent of extraordinary daring and courage who served in the SOE during the Second World War and who was awarded the George Medal, an O.B.E. and the Croix de Guerre. She was a Countess, beautiful, glamorous, everything a female spy ought to be. She was rumoured to have been a friend of Ian Fleming and the inspiration for various Bond girls, notably Tatiana Romanova and Vesper Lynd, although her own life story is far more interesting than anything to be found within the covers of a James Bond novel. She served this country with bravery and loyalty but after the war she was turned away, services no longer required. She came to a sad and untimely end in 1952, murdered by a jealous lover in the foyer of an Earls Court hotel. 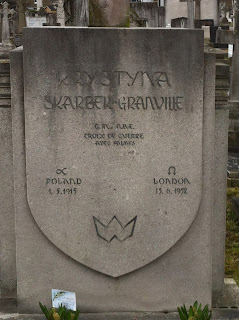 This might seem an odd mother and daughter activity for Mothering Sunday, but we had both read her biography, The Spy who Loved by Clare Mulley and I'd discovered http://www.findagrave.com, a site where you can find anybody's grave, famous or obscure.


I've always been a one for reading graves and epitaphs, even when I was a child. I used to walk through the churchyard to school and would often dawdle, reading gravestones, wondering about the  lives of the people buried there. Graveyards and cemeteries have gained greater significance, however, since I became a writer. They are good sources for names, for one thing. If you are setting a book in a particular place in a particular period, the local cemetery will give you a ready made selection which will be both appropriate and accurate to period and location. Just mix them up a bit.

Graveyards, or just graves have been a source of inspiration. I first saw the graves at Llanfihangel Abercowin Old Parish Church & Norman Grave-Slabs in South West Wales many years ago. Legend has it that these are the final resting places of a group of pilgrims on their way to or from St David's and who unaccountably starved to death in this place.  A friend and I became intrigued by the legend, the isolated, ruined church and the grave slabs with their mysterious human figures. There was a mystery here and one that, we felt, was not entirely explained by the antiquarians and historians.

We wrote a spooky, time shifting screenplay, incorporating other local myths and legends and moving between the Celtic past and the present day. Sadly, The White Dog of Traventy is still in a drawer somewhere (or actually in a small suitcase) . It taught me one thing, don't waste time writing a screenplay. 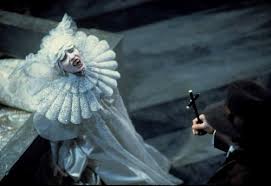 Still, some graveyards have been more productive for me. In the 1990s I had an idea for a vampire novel (I want the date noted). I decided to set the story (which would become Blood Sinister) in and around Highgate Cemetery in London. Highgate has a fine vampire history. Bram Stoker located Lucy Westenra's Mausoleum here in his novel, Dracula and there have been regular reports of vampire activity, right up until in the 1970s. 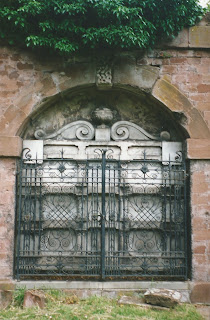 Perfect setting for a book about a vampire. Graveyards are hugely evocative and are wonderful places for creating atmosphere. When I'm writing anything, I visit the setting if I possibly can, have a wander about, notebook and camera in hand. I also collect things. With Blood Sinister, I visited the old, Victorian Western Cemetery in Highgate. Huge and genuinely spooky, a real city of the dead. Lots of famous people are buried here. You can only go round it as part of a guided tour, in case you got lost and were never seen again. Not so much snatched by vampires, more likely to fall into an old vault or crumbling underground crypt. 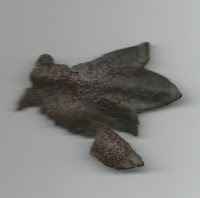 I also went to the old cemetery in Coventry where I took this photograph of a mausoleum, which would be the final resting place (or not) of my vampire character. While I was there, I found a bit of the wrought ironwork that had broken off, so I picked it up and kept it. Blood Sinister was always a good book to talk about on school visits. I'd take my 'souvenir' with me as an added a bit of  authenticity.

Cemeteries and graveyards are full of stories: enigmas contained within the epitaphs, dates of birth and death, the ages of the deceased. Even the memorials themselves: the lettering, the type of stone, the weathering can tell you something of the people who lived and died in a particular place. 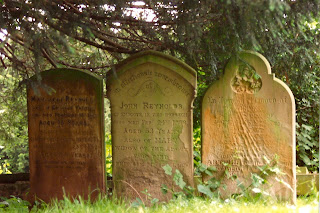 Yet e'en these bones from insult to protect
Some frail memorial still erected nigh,
With uncouth rhymes and shapeless sculpture deck'd,
Implores the passing tribute of a sigh.

Interesting post - and a brave lady who deserves those lilies and more.

All of those gravestones are aprt of history. Now we have a looser sense of tradition about funerals & less specific or permanent memorials, I wonder how that will affect future historians?

Thank you for the link, too.

Ah, wonderful - another graveyard enthusiast! My father took me to see Gray's grave (it is in a country churhyard) when I was a teenager and I love going to cemetries. They are so evocative and inspiring, as you say. I even contributed entries to findagrave.com for a while. You need to visit the Ascension Burial Ground next time you're in Cambridge :-)

I love that you have a bit of that graveyard - that's great!

Ah, I love graveyards! I have notebooks full of names and dates and those fragments of biography you discover there. Clare's book is fantastic, isn't it?

My sister and her family used to live across the road from an old cemetery. Her younger son, my nephew Mark, would take visitors on a tour of it, especially noting to his friends that Squizzy Taylor, infamous local gangster, was buried there. :-)

I've found fellow graveyard enthusiasts, I see. Wonderful! I'll certainly visit the Ascension Burial Ground next time I'm in Cambridge. Perhaps the Stroppy Author would give me a guided tour? And, yes, Imogen, Clare's book is excellent - packed with fascinating detail but reads like a novel. Thoroughly enjoyed it. I meant to mention the newly discovered plague graves in London, but forgot. Have to save for another post. So much one could write about on this subject.

Happy to take you to see Wittgenstein and co at the Ascension Burial Ground, Celia. And please *do* write a post about the new plague pit!

The Polish spy sounds wonderful - will look out for her book. I find gravestones very evocative too - but so sad when the graves are small ones, or those of young people!

I too love a nice cemetery. One of these days I'll write a post about my adventures while looking for Sylvia Plath's grave at Heptonstall. Ace post.

And what a BEAUTIFUL woman she was, too! Lovely...

I spent an afternoon looking for Sylvia, too, Adele. Found her eventually. Grave festooned with all sorts of little offerings, including a whole sheaf of pens.

Well I have often enjoyed this blog, but this one is extra marvellous for me - thank you Celia, and thank you Imogen. It is wonderful to know that someone has visited Christine since I last laid some red and white flowers there last year. Though in fact I know the Polish community also care for her grave.
Should there be a visit to the Ascention Burial Ground in Cambridge, might I join you both? I live in Saffron Walden, close by, and had no idea that Wittgenstein rests there.
All best, Clare Mulley

Hi Clare, lovely to meet you through the HG Blog! Thoroughly enjoyed your book, so scholarly and well researched, yet reads with the ease of a novel - I'm in awe! Your affection for your subject also shines through. I was moved to be there and glad to lay flowers for her. If and when there is an expedition to the Ascention Burial Ground, I will be sure to let you know.

Good blog post mum. Though I believe, having read Ms Mulley's excellent biography, the man who killed her was best described as an acolyte rather than lover... I just don't think he was her type (i.e. war hero!)