Of saurs and simians and sudden death – Michelle Lovric 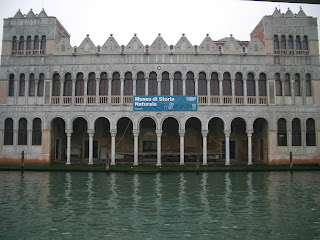 Few tourists realize that , perhaps unfairly stuffed with so many other attractions, also boasts an extremely splendid of in the old Fondaco dei Turchi on the . 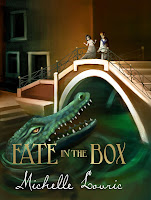 Researching my latest children’s book, The Fate in the Box, has necessitating my passing many pleasant and distressing hours there. I have borrowed liberally from the premises for my historical fantasy: it was there that I found the Sea-Saurs who are the dread of all the Venetians, and the mounted insects and stuffed baboons who come to life at the climax of the story. I also chose the Fondaco as the living quarters for my villain, Fogfinger, a great trophy hunter, as therefore as the setting for several terrifying encounters. 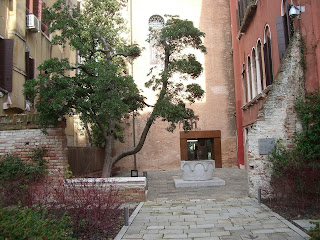 A visit to the museum begins via a small garden.

If you are lucky, you may meet this unusually coiffed cat, who frequents the grounds, and who of course became the cat 'Shaveling' in The Fate in the Box. 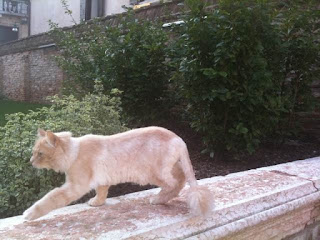 On entering, you climb immediately to the second floor to see the skeletons of a wonderful ancient crocodile Sarcosuchus imperator and a crested dinosaur Ouranosaurus  nigeriensis, both from the Cretaceous period, 110 millions years ago.  Sarcosaurus, on whom my Sea-Saurs are based, was a long as a bus and weighed eight tons. Its jaw was a metre long. At the end was a bulbous protuberance, the size of a large watermelon. This was the cavity for its nostrils, allowing it to take in air and hide underater for its prey. The curators also think that this large chamber would have given the Sarcosaurus a wonderful sense of smell and also allowed it to make terrifying noises (in my book, of course, it allows them to sing love songs to one another). It had a hundred sharp teeth. Unlike my Saurs, it used them on fish and perhaps also other animals. 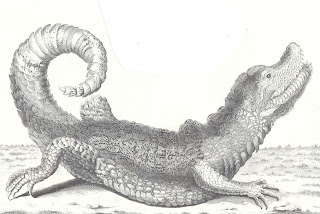 Michelle Lovric’s website.
The Fate in the Box is published by Orion Children’s Books on May 2nd
The ’s site

Email ThisBlogThis!Share to TwitterShare to FacebookShare to Pinterest
Labels: hunting, Michelle Lovric, museums, The Fate in the Box

It sounds fascinating! I had no idea there was such a museum there - I'll add it to my list of places to go if I ever manage to make it to Venice.

Oh, such a wealth of inspiration. Love to read about your Venetian discoveries...and am hoping for some spare moments to read The Fate in the Box before too long. Essie.

I'm currently reading and loving The Fate in the Box. How brilliant to hear about the real Natural History Museum! You are quite right, such museums are largely shameful monuments to the Victorian male plundering the natural and cultural world.

I had no idea either! What a gorgeous post....and the cover of Fate in a box (great title) is beautiful. Will look forward to reading it!

So much to see in Venice, and you use it so beautifully in your books! I'm in the middle of reading The Fate in the Box too, and revelling in it.

Gosh how wonderful! I want to go to Venice again! Sounds even better than the Pitt-Rivers. Your account of the hunting trophies is truly ghastly. Reminds me, though, of the man who made the wonderful gardens at Inverewe. He wrote a memoir and described wholesale slaughter of puffins, I think (for sport), and then said: There aren't as many puffins as there used to be.' Seemed to think there was no connection.