A Treacherous Likeness by Lynn Shepherd. Reviewed by Adèle Geras

Before you go on reading, do click on this link and especially on the little film at the end of the description of the book. Lynn Shepherd herself speaks for 8 minutes and tells us very well and engagingly all that we need to know about the book before we read it. It's a much better way of discovering what it's about than any synopsis I could provide.

Also before I begin, I will show you the three main protagonists. First, Percy Bysshe Shelley himself, Romantic poet, husband, lover, father and all round...well, I'll leave you to decide for yourselves and won't try and influence anyone. As a poet, he was one of the truly greats. "Ozymandias" I regard as one of the best poems ever. I love "Ode to the West Wind." I love "The Skylark." But one thing Lynn Shepherd's book brought home to me was that because we never studied him at school, I know very little about him and have actually read very little of his work. 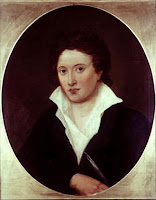 This is his second wife, Mary Shelley, author of 'Frankenstein,' daughter of Mary Wollstonecraft and William Godwin.

And here is Claire Clairmont, who travelled to Geneva with Percy and Mary and who figures large in the story.

Last year, a very good novel by Lynn Shepherd, called "Tom-All-Alone's" introduced us to a late nineteenth-century detective called Charles Maddox. He's everything you could wish for in a hero and when I think of him, I have someone like Benedict Cumberbach in my mind. (Actually I have BC in my mind when I'm doing a lot of my mental casting but that's another story!) She wove a tale of murder into the spaces left by Charles Dickens in "Bleak House" and the whole concept struck me as a brilliant idea.

Here the writer takes the well-known facts about the composition of "Frankenstein" (the ghost story telling night in the villa on the shores of Lake Geneva, everything that's documented about a ménage à trois that makes modern sexual mores look like a vicarage tea-party) and she manages to inject into the material an element of enormous mystery and suspense and a hypothesis that is both startling and plausible for everything that happened to these real people.

To do this as effectively as she does, Shepherd makes use of a technique that is a bit post modern, and which, it must be said, might annoy some readers. I loved it, though and I think it works in a very clever way. She's chosen to be there, in her own person as the writer of the novel, in a way alongside the story, commenting on various things; remarking on what is going on from a 21st century perspective. She does this unobtrusively and somehow the warp and weft of the narrative manages to hold and sustain these interjections.

There are a lot of letters, documents, accounts by one character or another at the beginning of the book and this, in addition to the 'case' that Charles Maddox is undertaking, makes the start of the novel one in which you have to keep your eye on the ball. But once it gets into its stride, there's no stopping it and the whole thing is a roller coaster of a ride. Both the characters from the past (Shelley's youth) and the present of the novel, set much later, are right there with you, and you care about every single one, especially Charles's elderly great-uncle, the first detective in the Maddox family.

On page 250 of the book, I found these words and because they describe everything so well, I am quoting them here. "He (Charles) thought he had the measure of these three - thought he had understood the coils of attraction and repulsion that threatens to drown them all in a wreckage of hearts, but it seems he is wrong: there are darknesses here for which even his experience cannot find a like."

I hope that lots of readers who visit this blog will enjoy "A Treacherous Likeness". I loved it.

I love your book reviews Adèle! They have led me to the best reads of my life. We did study Shelley at school and in fact learned Ozymandias by heart and I can recite (most of) it to this day! I wonder if there's a film about him akin to 'Bright Star' for Keats. If not...

Well placed and wise dots for a family blog, Adele!

Ooh, how enticing this sounds! I used to read a lot of Shelley's poems when I was young because my dad loved them and shared them with me - but you're right, Adele, we never 'did' Shelley at school, even then.

The tangled lives of the Romantic poets are full of dramatic potential for the novelist. I enjoyed Jude Morgan's Passion some years ago, and will definitely give this one a go. Thanks for bringing it to my attention.

A while ago I encountered Geoffrey Trease's novel, "So Wild the Heart", set in Italy around the Romantic period. Trease's rare adult novels are an absolute delight - full of sly humour and romantic contretemps.

I think "Ozymandias" must have been de rigueur at schools back in the day- I certainly remember reciting it and can still quote chunks of it at will :)

Thank you for your marvellous post Adele. I loved Shelley at school and also walked around quoting his poems occasionally even putting on a performance for myself in front of the mirror!!! The vanity of youth! I wonder if teenagers now, learn poetry in the same way.

I'll have to lay my hands on this book... somewhere on my shelves in South Africa I have a biography of Mary Shelley where there's an account of that night next to the lake and of course the later drowning. What an enticement you've given us, Adele... thank you!

Anyone who enjoys this book should also read Lynn's TOM ALL ALONE'S which is ace. Thanks for all the lovely comments! And Jude Morgan is TERRIFIC. Try A TASTE OF SORROW (about the Brontes) and THE SECRET LIFE OF WILLIAM SHAKESPEARE. Both are marvellous.