There’s the history you search for and the history that you find when you're looking. Or not.

I’ve just read Catherine Bailey’s Black Diamonds, a book intended to unravel a mystery about the history of Wentworth House.

Bailey, a journalist and documentary filmmaker, was fascinated by Wentworth House, a vast edifice in South Yorkshire with a room for each day of the year and a front that exceeded the length of Buckingham Palace. It had belonged to the Fitzwilliam family but Bailey heard rumours about a first son smeared with illegitimacy so a younger son could inherit.

The book is much more than the quest for that answer. 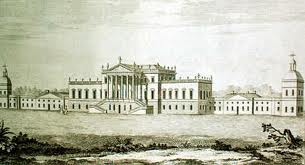 Bailey searched for the collected family archives but they no longer existed. Decades of 19th and 20th century papers, documents and correspondence were missing. not damaged by natural decay or chance but destroyed very deliberately, fed into a bonfire that lasted three days. The core of her original story was missing.

So she set to work from the"outside". She searched for clues and material about the house and its people in newpaper archives, in the retained halves of correspondence, in court circulars and local papers, as well as in industrial and local archives, She interviewed people, listened to memories of memories, studied maps and reports, Finally she constructed what some might say is a patchwork quilt of a story to cover her history. 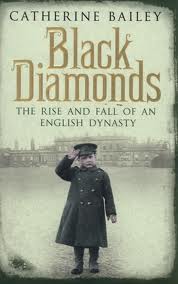 In my opinion, Bailey’s random approach – though certainly not random in method - gives Black Diamonds a charm and interest that I’m not sure would have been there if all had been in neatly documented order. Those lost documents might have given her so much information that the byways of the Wentworth House story would not be explored.

So what is the book about? Good question, as shown in the interesting shift in the way the book was marketed.

The hardback cover showed a photo of a small boy in uniform, photographed alone on the drive of a big house, subtly suggesting military leader, as well as issues of class, inheritance and ownership. A baby princeling.

However, the paperback avoids the lone heir. It bears a photo of a lipsticked lady in a flapper cloche, dominating the partial view of Wentworth House. This cover suggests sophisticated romance, Mitfordesque flightiness and upper-class lives wrecked. Maybe, for the paperback reader, all three? 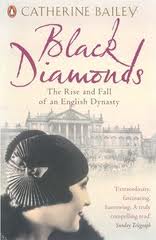 My library copy had that cover and almost didn’t read the book. I read it because it was my reading group’s choice.

Most people in the group enjoyed it although there was some murmuring about unevenness and hearsay rather than evidence and how “it didn’t really end” which it wouldn’t, being real life not fiction.

I did read it and am very glad of that. Himself at home is reading it with enjoyment too.On the other hand, with that cover, he wouldn't have done so if I hadn't read some of the most enticing bits out to him.

So what makes Black Diamonds so interesting?

At one level, there’s the scale of the riches. The house and staff at Wentworth make Downton Abbey look like a bit of middle class posh, playing on half strength. Then there’s the problems of the idle rich - what does one do all day, darling? – as they flit from house to house and country to country, with a final flit too far.

There’s the importance of a good marriage and unimportance of romantic flings – not so unusual – but what is remarkable, given there’s enough to go round, is the intense hatred towards relatives and friends over worldly inheritance and family religion. These were times when there was unbelievable rigidity over religion.

Despite the sunny ecumenical amity of the recent Father Brown TV series, back then was a very different religious era, a time when no Catholic could attend the service of another denomination without the guilt of sin and when anti-Catholic feeling was strong and suspicious.

This book overarching narrative is about the mysteries and eccentricities within the FitzWilliam inheritance, but its strength is in the glimpses of political and social history along the way.

There might be high society tangles later but there is also a sense of good ownership and the call of duty, of building houses for your workers, of taking  care of the men in your mines, of looking after your people when they are in trouble, albeit with food parcels. Bailey also offers a compelling view and a rational explanation of the decline and destruction of the country house. 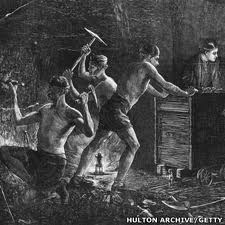 Bailey does not forget that the people who created the wealth were working miners.

The Wentworth estate lay across the famous Barnsley coal seam, and in the pages we hear the voices of the miners, man and boy. with both the pride they felt and the hardships they and their families faced.

Alongside, Bailey brings in glimpses of wider political changes: Lloyd George and his wily political manouvres; the rise and the fear of socialism and unionism; the damage done to British coal-mining by the Treaty of Versailles prioritising German coal, as well as the royal publicity visit to “the North” that witnessed a real-life colliery disaster, and then economic decline.

During WWII, Wentworth lay under the threat of German bombs: the Raf secretly misled German bombers over the whole city of Sheffield to keep them away from the vital steel-works.

Even when peace came, it did not bring good news. Wentworth's last bitter blow, acording to Bailey, came from the vindictive plans of Manny Shinwell, the man in charge of the newly nationalised coal industry. He decided the Wentworth estate should be developed as an open cast mine. The great parklands were stripped of their trees and flowers, despite a geological report indicating the coal beneath was of poor quality, and the beautiful building undermined by subsidence created by the mining work. Even the heaps of cleared topsol, trees and rubbish were piled up in a ridge across one fo the views from the house.

Recently, Wentworth House has recovered slightly. The house has made a few tv appearances. I remember that one programme showed an aerial photo of the ravaged surface, with Wentworth House balancing on its small patch of land. At the time I blamed the owners of the house. Now I think, right or wrong, that stretch of ugly desolation was Manny’s revenge on the rich. The sad twist is that the progamme was one of those beg-for-money competitions and the faded Wentworth did not win.

Since then, I’ve read rumours of unsuccessful insurance claims and plans to turn Wentworth into into a luxury hotel, spa and wedding venue, with the website shows pictures of still-existing interiors. Maybe that's a happy thought.

However, I’d advise against giving any young couple a copy of Black Diamonds. Or reading it while lying in a bubbling jacussi, high above the miles of mine workings.   It wouldn't seem right, somehow.

Extreme wealth - it intrigues and appalls at the same time - but the 3-day bonfire ... awful!

Thanks for this review!

Thank you for this post. I found 'Black Diamonds' a compelling read. I agree that the paperback cover is just - well, awful. But anyone who is as interested as I am in the vast social gulf between rich and poor in the early twentieth century, could do no worse than read this this fascinating book. I know it helped colour my fiction. Neither side came out smelling of roses.

I have heard about the plans to restore Wentworth to its former glory although I would prefer it if were to end up in some sort of public ownership so that everyone can enjoy it rather than a few (rich or corporate) hotel guests.

Sally, thanks for your comment - and agree about the rich hotel guest.

I found there were lots of moments when I thought "Ah!" in the book - for example, the way that pits that were sold into private company (as opposed to paternalistic hands) were said to treat their workers much more harshly. PFI/privatisation of schools? nhs?

And plenty more, big and small and some incredibly poignant. I don't want to spoil the book for anyone yet to read it.

This sounds interesting. It reminds me a bit of the story - what little I know of it - of Shipley Hall, which used to be near where I was brought up, in Ilkeston, on the Notts-Derby coalfield. D H Lawrence is said to have based the Chatterleys' house on it; my mother could remember it. We used to go for walks in its former parkland, but there was very little trace of the house left. The owners had sowed the seeds of its destruction; they made a great deal of money from mining, but the tunnels had gone underneath the house, and during the great strike, in the 20s, they were not properly maintained, and so the house suffered terminal damage from subsidence. The only physical trace of it my friends and I ever found was a strange small ruin, which had what appeared to be a pentagram on the floor. The house always seemed to me to be a ghostly presence in Shipley Wood, now Shipley Park.

Sorry for the late comment but I've been away. My grandmothers family came from Elsecar - Just to the North of Wentworth and many of my forebears worked in the Fitzwilliam mines. Black Diamonds is a great read but if you want a more in depth analysis of the Fitzwilliams approach to business it's worth getting hold of a copy of "Aristocratic Enterprise" by Graham Mee (2nd on ABE books for about £1) which I think was based on a Phd or similar research into the Fitzwilliams businesses through the 18th & 19th centuries.
Gavin