Dinner with Veronese, by Laurie Graham

Venice and all things Venetian are the province of History Girl Michelle Lovric but today I’m venturing onto her territory. The topic came to me by a rather strange route involving my sluggish brain and the jungle of Russian grammar rules relating to dates. My tutor set me some homework: choose an artist and write an essay on him incorporating all the significant dates in his life. Not as self-evidently useful as learning, say, how to order vodka and blini, but nevertheless a good exercise and, Russian grammar aside, it gave me a delightful insight into the personality of Paolo Veronese.

In the 1570s Veronese was commissioned to paint The Last Supper. It was to hang in the refectory of the Dominican basilica of San Giovanni e Paolo in Venice. Veronese, being the kind of man he was, populated the painting with many enchanting oddities: a jester, a parrot, two dogs, a cat, a man with a bleeding nose. Instead of the simple upper room of the Bible story he chose a magnificent colonnaded interior as his setting. 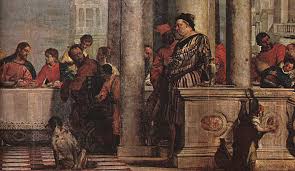 What his Dominican patrons thought of it isn’t explicitly recorded, but this was the 16th century and the Counter-Reformation was a factor in the life of any artist. Veronese was summoned by the Office of the Inquisition to answer for his painting’s irreverence and lack of decorum. The word ‘heresy’ was whispered.
Veronese’s responses to the Inquisition’s questions provide us with one of those moments when a figure steps out of the frame of history and celebrity and becomes a real person. I offer you a few examples.

Q. Do you know why you have been called here?


Q. Can you imagine what those reasons may be?


Q. Say what you imagine.


A. I fancy that it concerns what was said to me by the reverend fathers, or rather by the prior of the monastery of San Giovanni e Paolo, whose name I did not know, but who informed me that he had been here, and that your Most Illustrious Lordships had ordered him to cause to be placed in the picture a Magdalen instead of the dog; and I answered him that very readily I would do all that was needful for my reputation and for the honor of the picture; but that I did not understand what this figure of the Magdalen could be doing here.


We live in times when freedom of creative expression is at great risk, as did Veronese, but he comes across as laconically stubborn. Perhaps, as a recognised maestro he felt he was safe from any harsh treatment. As the Inquisition gets down to particular objections one can sense his impatience.


Q. What signify those armed men dressed in the fashion of Germany, with halberds in their hands?


A. It is necessary here that I should say a score of words.


A. We painters use the same license as poets and madmen, and I represented those halberdiers, the one drinking, the other eating at the foot of the stairs, but both ready to do their duty, because it seemed to me suitable and possible that the master of the house, who as I have been told was rich and magnificent, would have such servants.


Q. And the one who is dressed as a jester with a parrot on his wrist, why did you put him into the picture?


A. He is there as an ornament, as it is usual to insert such figures.


Q. Did some person order you to paint Germans, buffoons, and other similar figures in this picture?


A. No, but I was commissioned to adorn it as I thought proper; it is very large and can contain many figures.


There’s much more and it makes very entertaining reading. You can find the translated transcript here. I commend it to you.


We know how it ended. Veronese received a reprimand and was ordered to ‘correct’ the painting within three months, and at his own expense. He went home, mulled it over and thought, ‘Damn this for a game of soldiers. I’ll just change the name of the painting.’ And so survived The Feast in the House of Levi, with all its charming detail.


It’s the kind of painting that makes you wish you could have met the artist. Dinner with Veronese? Yes please.

Email ThisBlogThis!Share to TwitterShare to FacebookShare to Pinterest
Labels: Feast in the House of Levi, Laurie Graham, Veronese

Veronese sounds like a character who should have been played by the late Bob Hoskins. You set the scene so well, Laurie.

Clearly Veronese, unlike his inquisitor, had a sense of humour. He also did me a great favour - when I came to write "Omphalos," I knew how a German of the time might have dressed.

The reason "Germans" were so offensive to the Church in the painting of the Last Supper was that the Protestant reformation had just started in Germany and was spreading across Europe. By putting in Germans, Veronese could have been saying that they had a point.