MY LIFE IN HOUSES by Margaret Forster. Reviewed by Adèle Geras

The first thing that occurred to me when I was thinking about this post was: I'll write a review of My Life in Houses by Margaret Forster, because even though it's not a historical novel, it is about a person's  history.  One of the reasons  I liked this book so much was because the idea of looking at a life through the houses that a person has lived in was so wonderful and so apt that I marvelled it hadn't been done before. There's a piece from Leonard Woolf's Downhill all the way which credits him with the idea, but I don't know of any other. I stand ready to be corrected, but as far as I know, Forster is the first person to do  exactly this. Penelope Lively, in books like Ammonites and Leaping Fish, A Life in Time and Making It Up  has explored her own life in several unusual  ways, but not quite like this.  As soon as I heard about Forster's book, I thought: of course. This is such a logical journey to take  through a life: following the subject from house to house through the years.  Part of me was very envious. I wished it had been my idea.

And so we follow Margaret Forster from Carlisle to Oxford to Portugal to London again and to the house in NW5 where she still lives. Along the way we meet not only several different Margarets (the young child, the student, the writer, the wife and mother and the elderly woman) who share throughout a clear-eyed intelligence and a delight in the vagaries of life in all its strangeness. We meet many other people. We get to see houses she has visited or stayed in for a short while. She looks. She describes. Above all, she speaks to the reader as though she's across the table, say, with a cup of coffee or a glass of wine in her hand. She's open without being too intimate or embarrassing. She's gossipy without being nasty. She's constantly entertaining and fascinating about the  physical  properties of the houses themselves. I can't recommend this book highly enough. The fact that there is an ending which isn't entirely 'happy ever after' is down to Forster's honesty. She has suffered from cancer in the past and that cancer has now returned. Has that stopped her from writing this intelligent, humane and fascinating book? Of course it hasn't. The Margaret we've been following from her first house in Orton Road in Carlisle would see to it that the book got written.

It's also worth saying a word about how beautifully this volume has been produced. Chatto &Windus have done a grand job. The font, the cover, the paper: they are all quite beautiful and the production adds a great deal to the pleasure of reading it. Do not get it on Kindle because you will be missing a real treat. 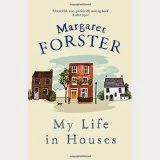 Something else occurred to me while I was reading this book.  I am often surprised that writers known to me since I was very young seem not to be as talked about and lauded as the latest whizzy young thing. Forster is a writer who has never quite got the public acclaim she deserves. Her readers love her. They've loved her for years and she is a National Treasure of sorts, though I fear mostly for the middle-aged reader. She's never won the kind of prize that gets you noticed and written about. She's not flashy. She does not appear on talk shows. She's popular but would not immediately leap up the best seller lists. And this is a huge shame. I think it's time that her books were better known and more widely read. And as this is the History Girls, it should be said that several novels from her enormous backlist are very accomplished bona fide historical novels.  She has written biographies, such as this life, (below) of Elizabeth Barrett Browning. 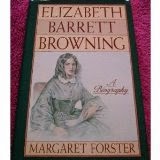 And she returned to to the subject of Browning in possibly her best-known novel: Lady's Maid.  This tells the story of the Browning ménage through the eyes of Elizabeth's maid. If you haven't read it, then do so at once. It's brilliant. She has written social history, as in Hidden Lives 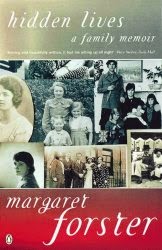 and in a ground-breaking novel about dealing with Alzheimer's within a family she opened the way to many novels by other people which came after it, in which 'problems' in society were dealt with in a fictional way. 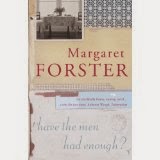 She's returned to biographies again and again. She's written about Daphne du Maurier and below, she tackles the lives of eight early feminists. 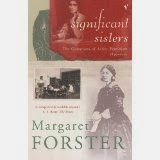 "Is there anything you want?" is a novel about women who come together because they all have suffered or are suffering or have recovered from cancer. It is typical of Forster that she took what must have been a terrible personal experience and made fictional gold from it. 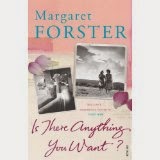 She's written a Gothic novel. She wrote the book on  which the movie Georgy Girl was based.  She's written funny books, and very sad ones, especially Over about a family dealing with the early death of a child. She's tackled adoption, and in Mother's Boys she writes about young criminals. She's interested in everything and everything she writes is worth reading. Do try her books if you haven't already. You will thank me for this suggestion, I promise you.

Can there be anyone who isn't persuaded? I shall put Margaret Forster on my reading list at once. Thanks, Adele.

You've just solved the problem of which book to buy my mum for her birthday this month. Thanks, Adele!

I've read several Margaret Forsters, and I agree, she's excellent. Will certainly put this one on the list!

Excellent, thank you, Adele. The House book will be added to my list. I remember hearing Margaret Forster on the radio some years ago talking about research, and if you weren't careful, it could take over. At some point you had to pull back and simply write the book. Otherwise the engine could stall through too rich a mixture, was how she put it.

I've read some, and some are new to me and I now mean to get to. Thank you for this lovely tribute.