I met this little madam at the Metropolitan Museum of Art in New York. She's American, a New Yorker; her name is Emma Homan, and she was painted around 1844. Look at her! She's two. 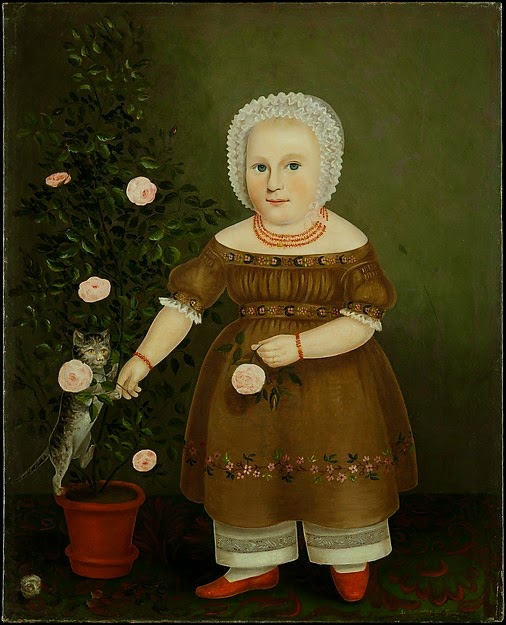 Look at her face: 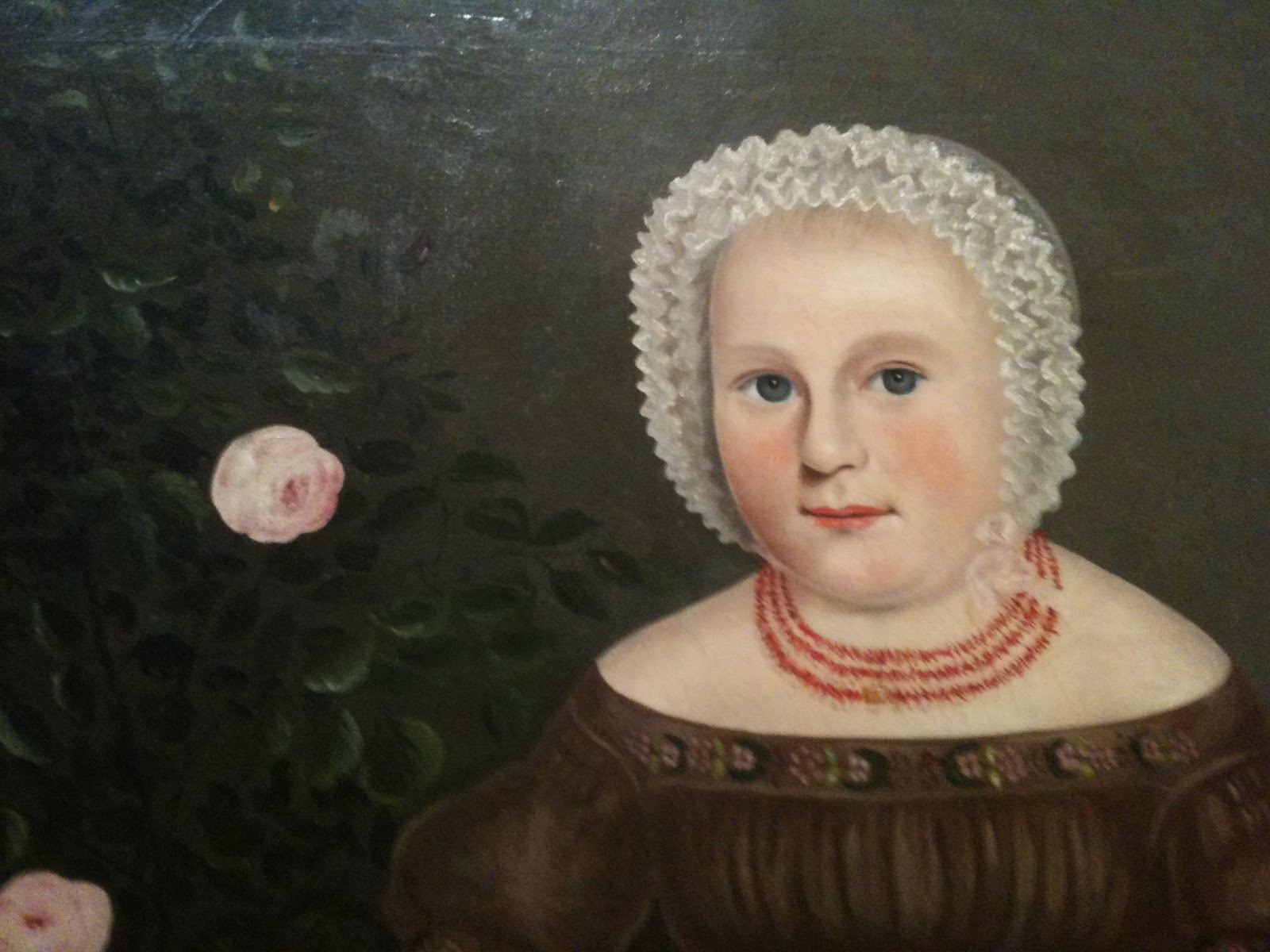 Her bracelet - her ring and her rose! 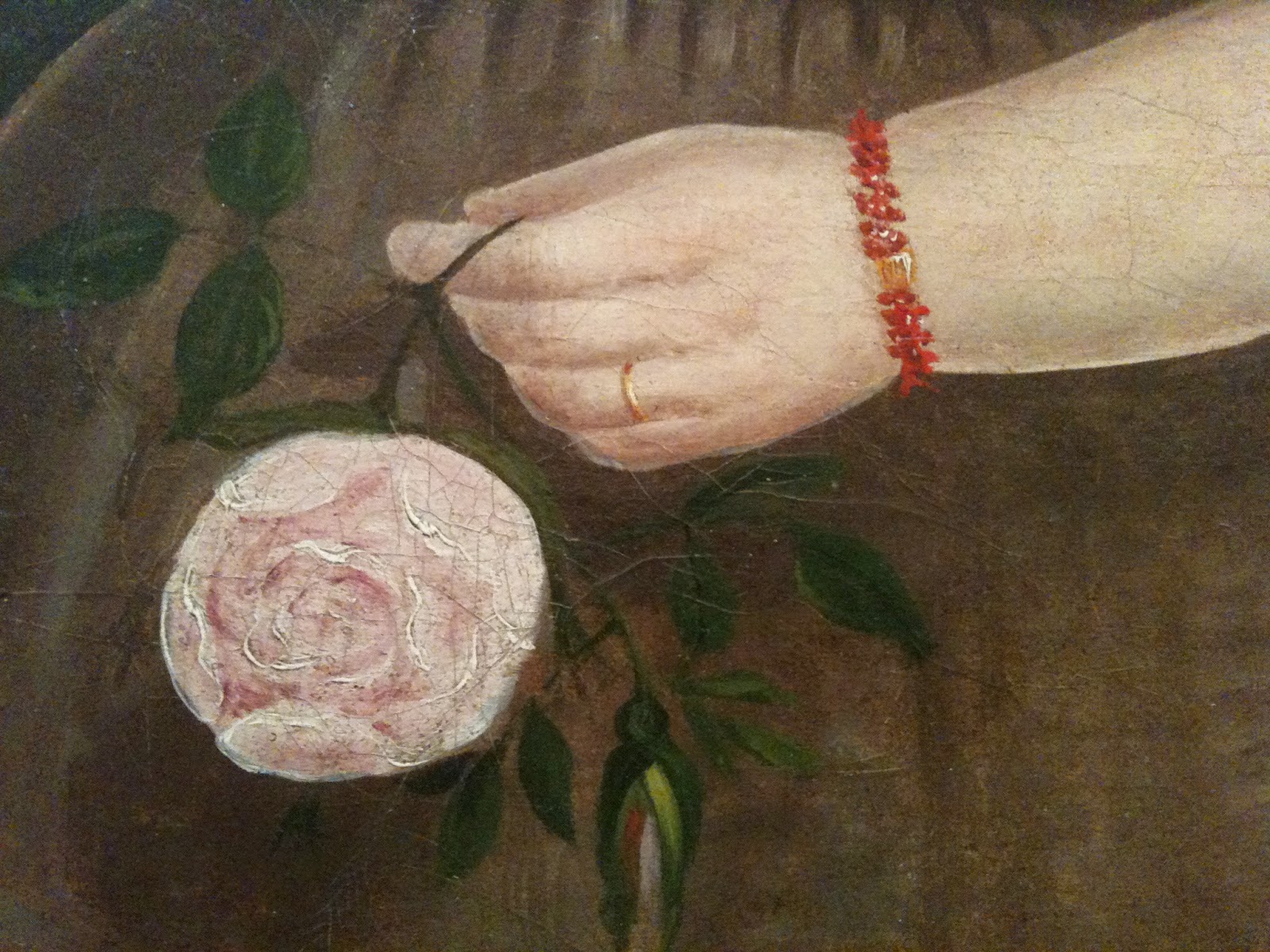 Look at her slippers - her pantalettes - her embroidered borders! 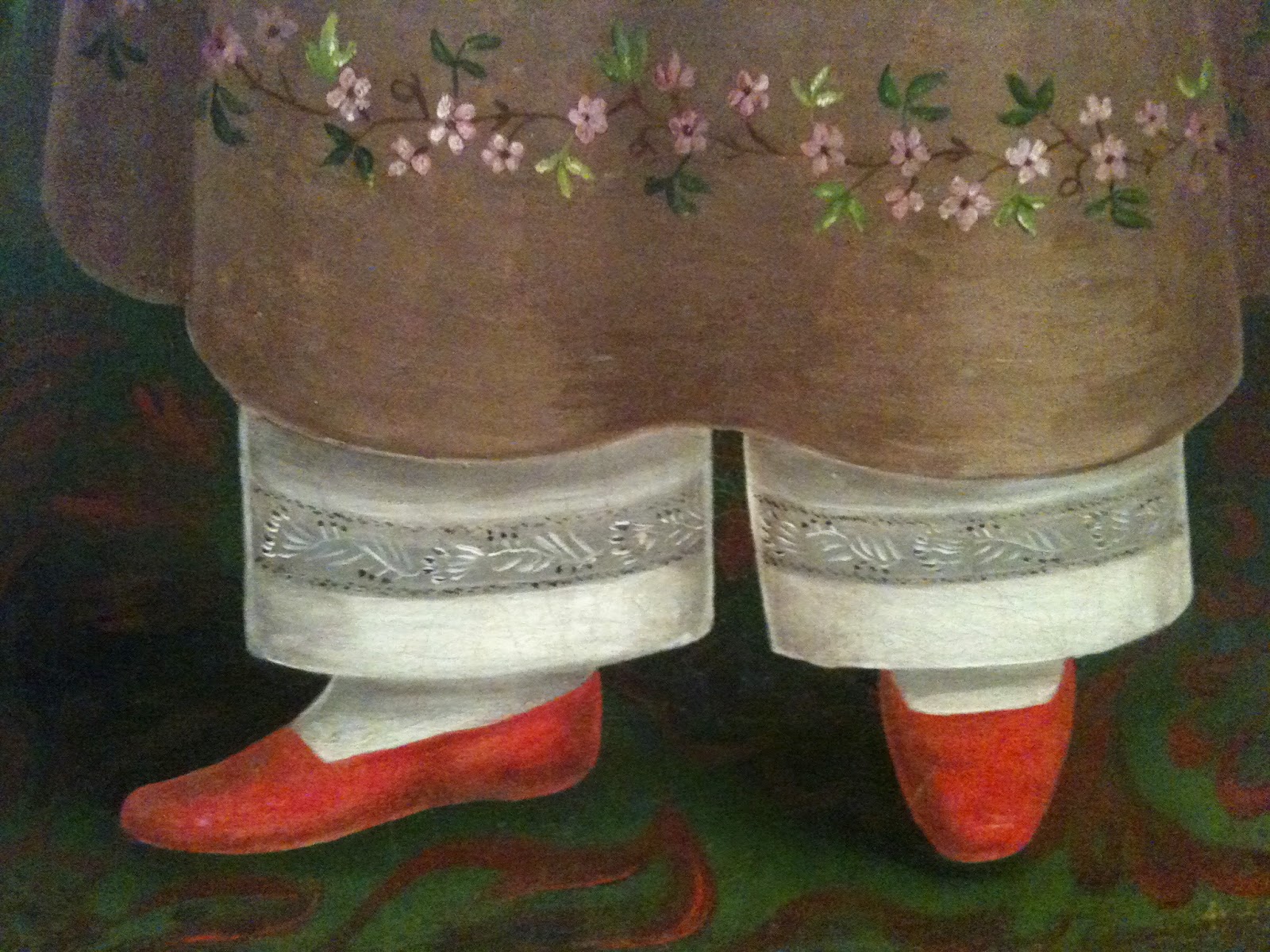 Look at her cat! It's in a rose bush. And it's quite clearly bonkers - 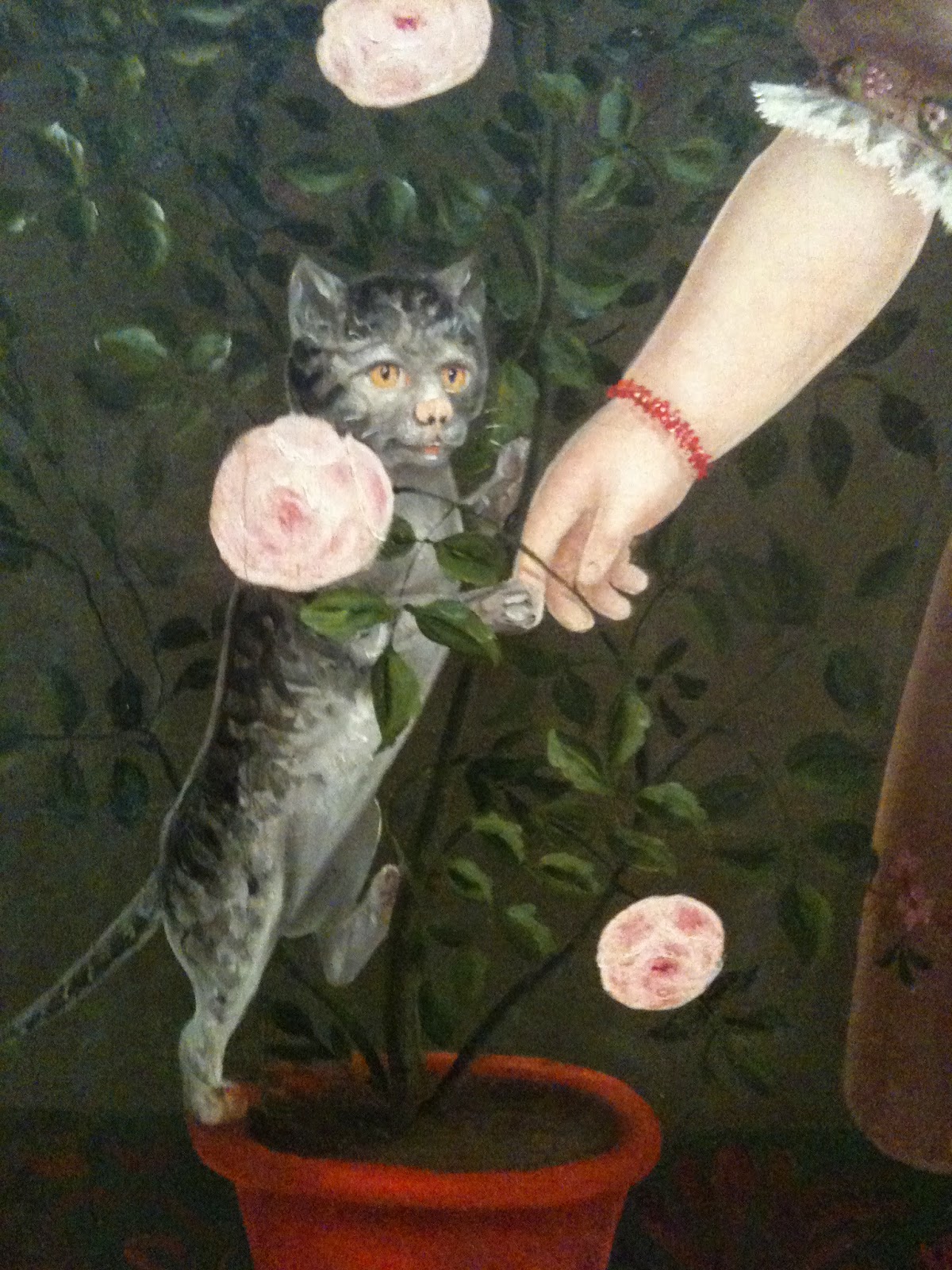 She was painted by an artist called John Bradley, one of those elusive characters who leave behind a common-enough name, some work, an address or two, insubstantial dates, and an air of mystery. Though he is thought of now as an American painter, there's reason to think he was originally English: he signed himself as being from 'Great Britton', and this magnificent cow -  Painting of a Prize Cow in a Field, is signed 'Drawn by I Bradley, Honington, Suffolk 1827' - I Bradley being Iohannes Bradley. 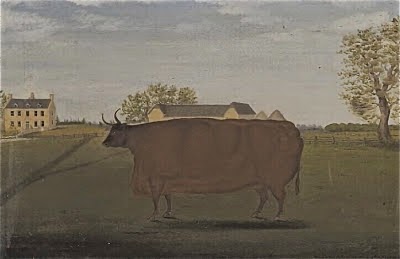 This pair of portraits of children,  and 'consigned to Bonhams Ipswich from a deceased estate' in 2005, are signed 'I. Bradley, Limner, Suffolk 1830'. For a while I thought ah, he must have moved around, from Honington to Limner - and then I realised ah no, limning is what he does. He is a limner - from illuminator, I suppose.
1. a person who paints or draws.
2. an itinerant painter of C18th America who usually had little formal training.
3. a person who describes or depicts in words.
4. an illuminator of medieval manuscripts. 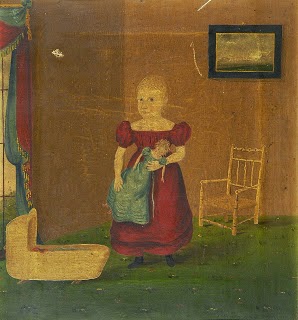 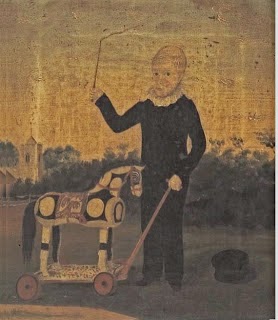 Two years later he usefully placed himself in New York by painting a Staten Island merchant, Asher Androvette, holding a copy of the November 29 1832 edition of The New York and Richmond County Free Press. It was signed, I. Bradley Delin. 1832. 'Delin' meaning, what delineator? He who drew the lines? One of his techniques was to put pale lines around faces, figures and objects to highlight them. It's what gives his paintings their air of light. Illuminating them.

Though there was a John Bradley of unlisted profession who arrived from Ireland in August 1826 on a ship called Carolina Ann, he probably was not been the John Bradley who was painting pictures of cows and children in Suffolk in 1830. Blogger Milton Trexler reports that 'After a thorough investigation of passenger ship lists, [we find that] four individuals named John Bradley arrived in New York between 1830 and 1832: one on March 27, 1832, aboard the ship Citizen out of Liverpool, age 21, listed as Irish and a laborer; another on June 14, 1832, abbreviated as Jno. Bradley, on the ship Robert Peel out of Hull, age 20, listed as from Great Britain and a farmer; another on August 27, 1832, on the ship America out of Liverpool, age 20, listed as from Ireland and a labourer; and a boy, aged 15, listed as Irish and a farmer aboard the William Byrnes on August 14, 1832. Yet none of these gentlemen, due to either age or occupation, seem likely candidates. A search of Boston and Philadelphia port records and a search of original U.S. naturalization papers with John Bradley signatures also produced inconclusive results.'

Since our John Bradley was a professional painter in Great Britain before leaving for the US, one would expect him to record his profession on the ship's passenger list as 'painter' or 'limner'. He was known as being 'of the English school'; the music on the piano in another painting is a well-known Irish ballad, The Angel's Whisper. There were several Bradleys, some of them called John, living in Staten Island in the 1830s. One is registered as having 'aliens' living with him - perhaps one was John, during the five years before he could apply for citizenship. One was in an asylum.  Well, by the 1840s he was living in Soho - on Hammersley Street and later Spring Street, making his living as a painter, portraitist and miniaturist. An artist living downtown! After 1847 there is no more trace of him. We don't know how old he was, whether he married, had children. But I fell in love with young Emma, and the idea of a man who could paint a two-year-old like that - such a little queen. These vague scraps of story set one to wondering. I imagine John Bradley in a Joseph O'Connor novel, Star of the Sea or Redemption Falls, leading a wicked and complex life. During the times when people in New York lived in their community of origin - Irish, Chinese, Italian, Russian, Jewish - the Village was where you went to live if your own community wouldn't have you, or you could not longer stand it in your community for whatever reason. As we know it retains the reputation of being home to the gays, the artists, the drugtakers. the musicians, the transgressors . . . There is a suggestion that John Bradley was originally a painter-and-decorator. I find I like him. I could make up a life for him.

A tiny bit more research brought me to these girls, Emma's almost-twins: Little Girl in Lavender, whose cat is rather less psychotic, and her roses a little redder. Vice President Bush chose her from the National Gallery of Art in 1981, to hang on the wall in his home. And Young Girl in a Green Dress: same basket, same trousers, same flower pot, same fat little hands. 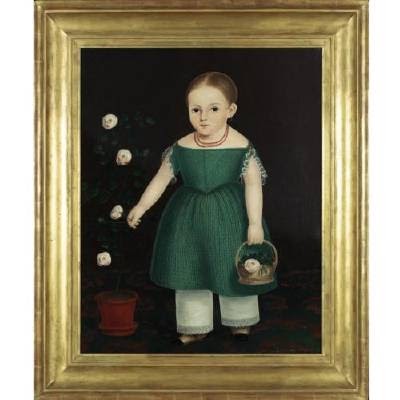 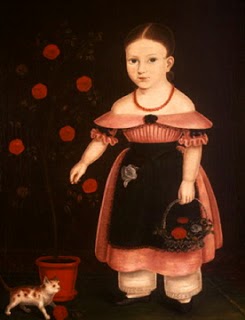 And here is a boy, feeding rabbits. 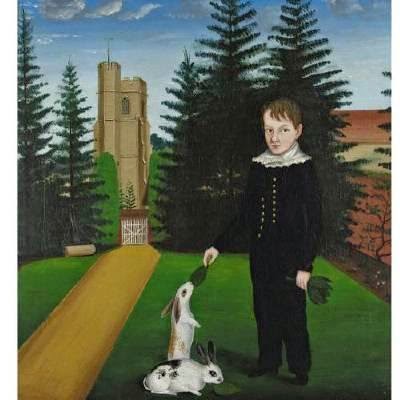 and this chap, about whom I can find nothing whatsoever. 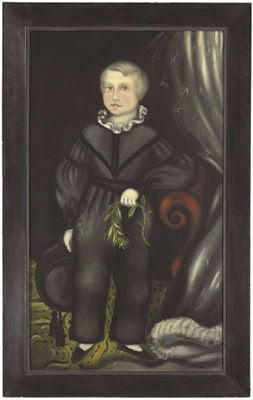 And here, The Cellist, with his abnormally long arm and tiny delicate musical feet. 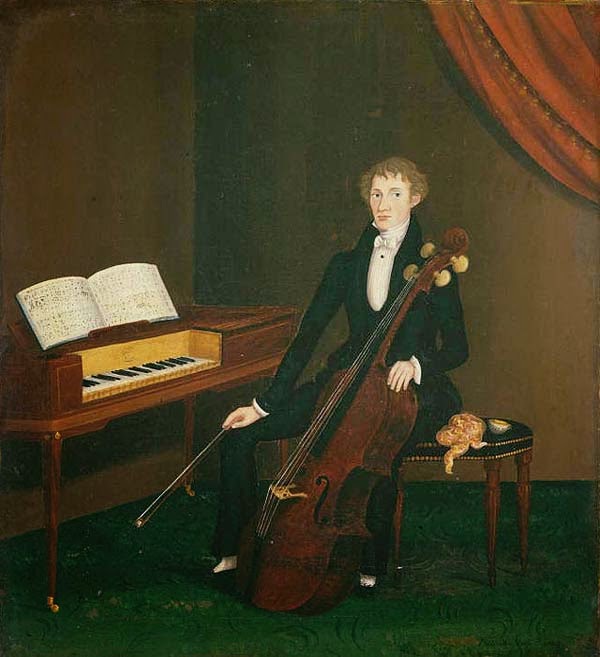 These two have borrowed his red curtain 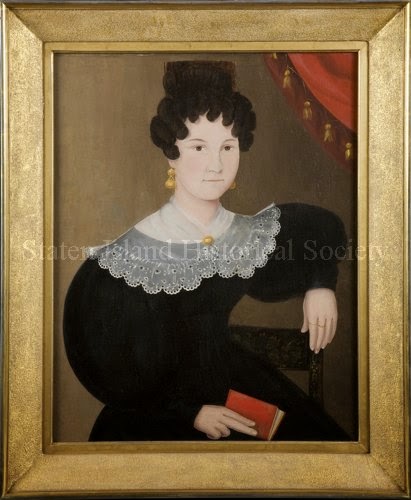 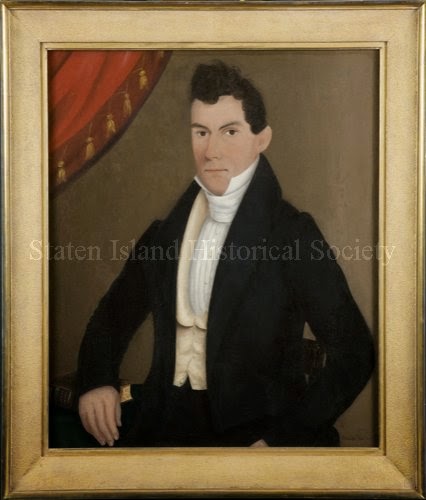 Why do I love these portrait so much? It's partly the colours and the items, so strong, delicate and simple - the little red book, the parti-coloured hobby-horse, the coral necklaces, the lace, the bunch of leaves, the sheet music. But more, it's the eyes - so particular, such a straight gaze. 'I am here', they say, just as clearly as any Velasquez. And you think about what they might have had to do to get there, to the stage of being painted, albeit by a self-taught chap who gets the arms wrong.
They remind me, actually, of Lorenzo Lotto's Portraits: The Young Man, and the Woman inspired by Lucretia. 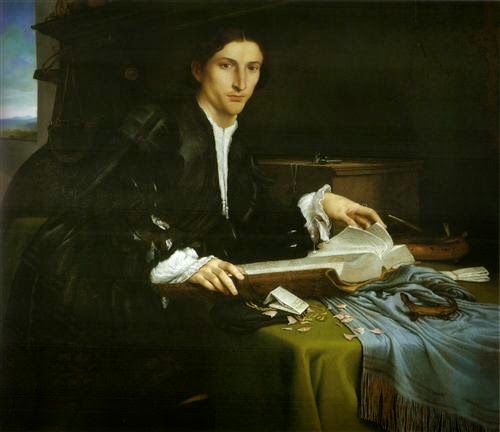 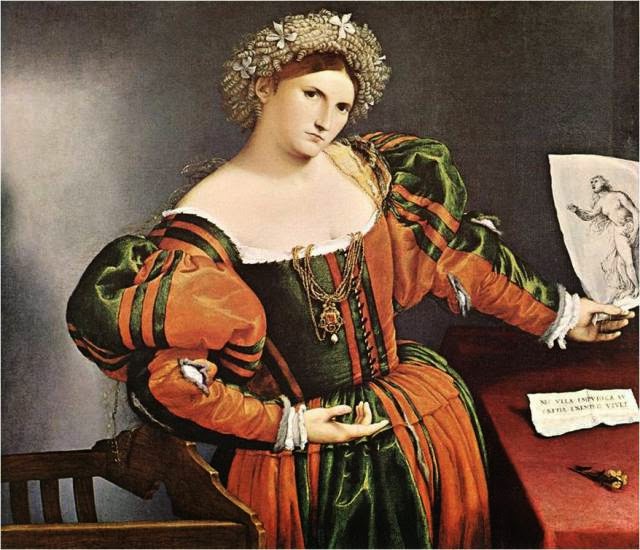 But back to Emma. The Met gives her dates, and a married name emerges - Emma Holman Thayer. She - if she it is - grew up to be a writer!  I am delighted beyond reason by this discovery. She wrote a novel called The English-American, published in Chicago in 1890. 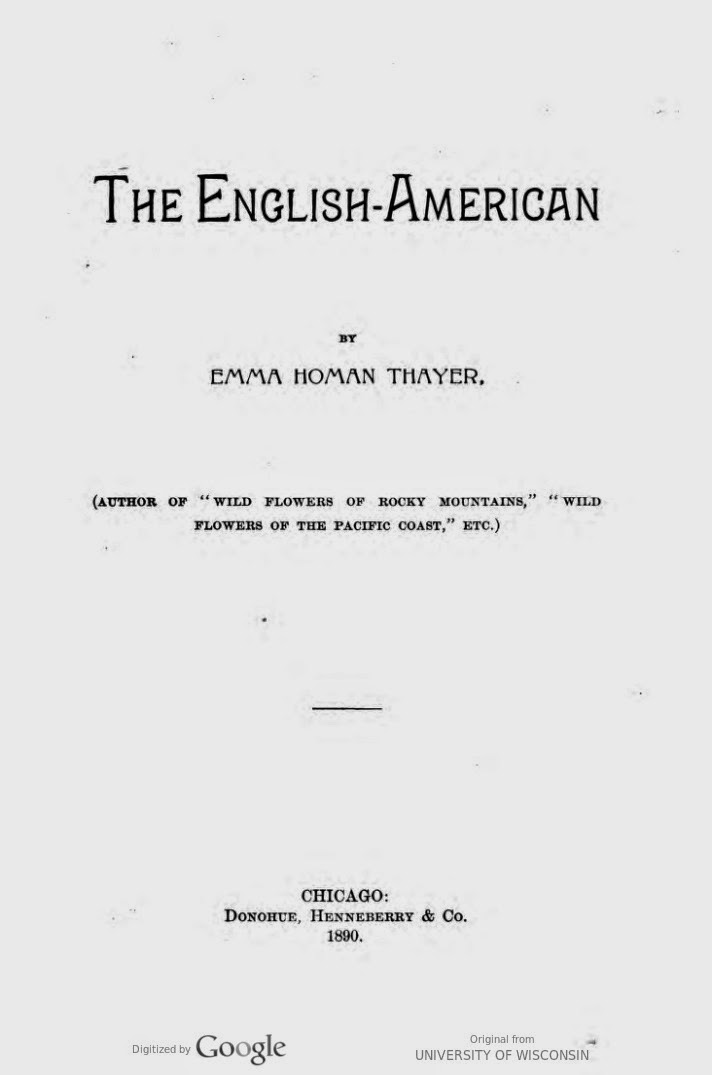 I investigate. It is terrible. It is set in a London that has clearly never been visited by Emma, nor anyone else, and has characters like this, the maid: 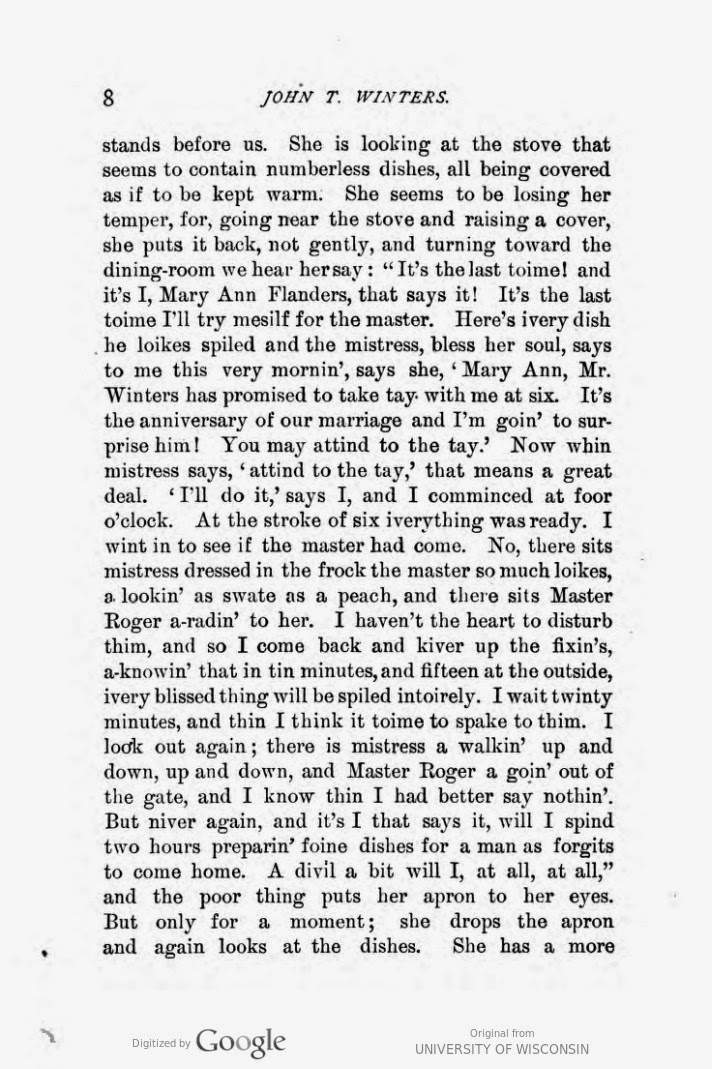 That is one of the better pages.

My disappointment is considerable. I had hoped for better from Emma. 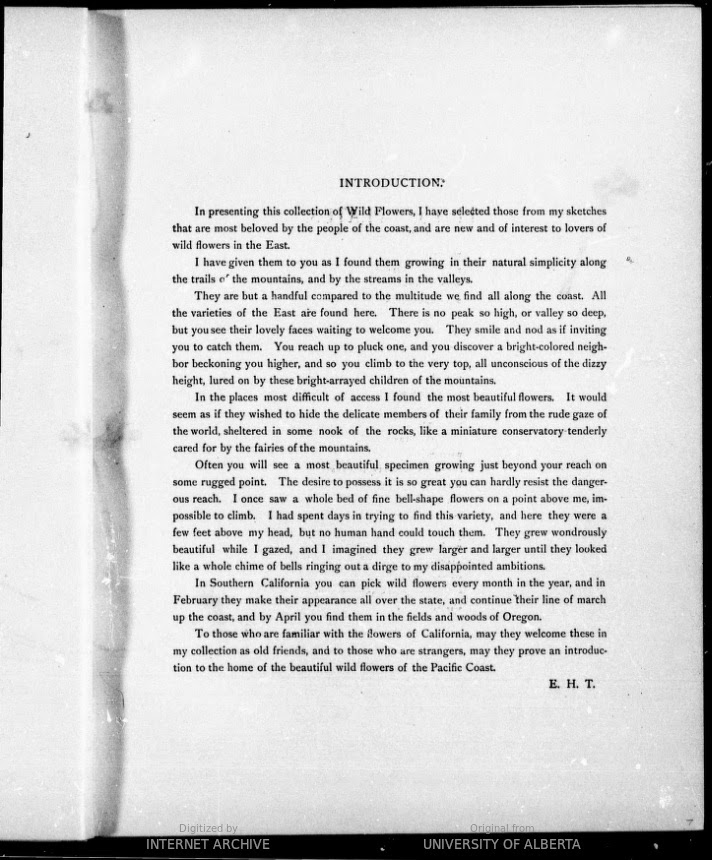 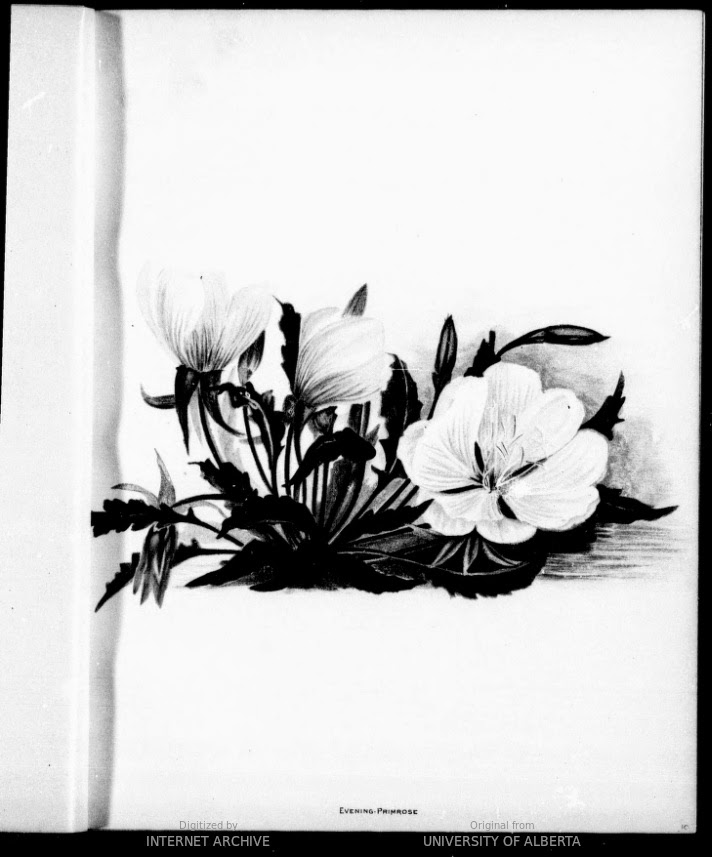 But the drawings are nice. Really nice. 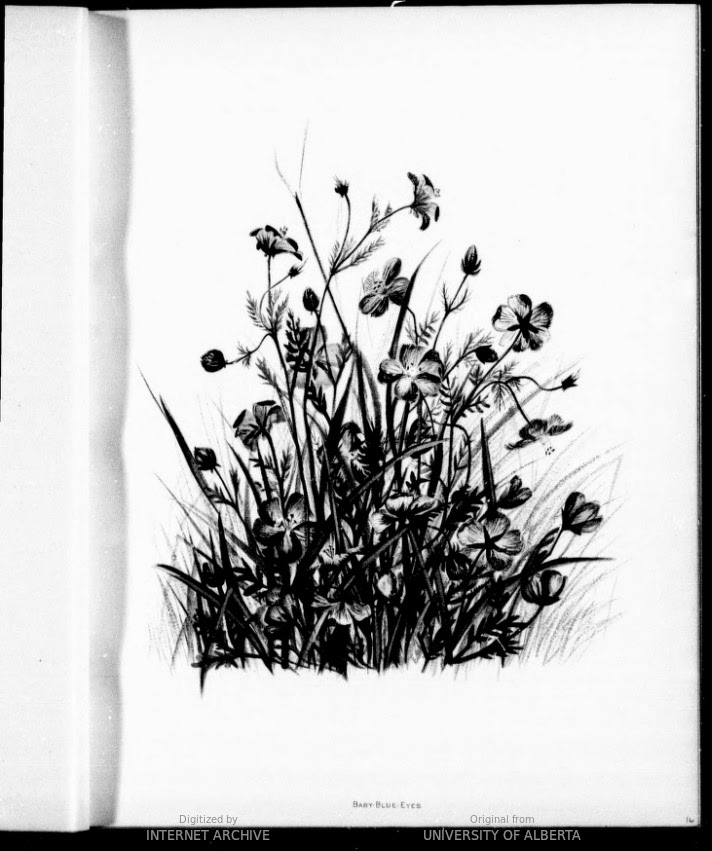 So I forgive her, and I still love her.

Here is her neighbour at the Met - not painted by Bradley.
He's a boy. No wonder he looks so furious. 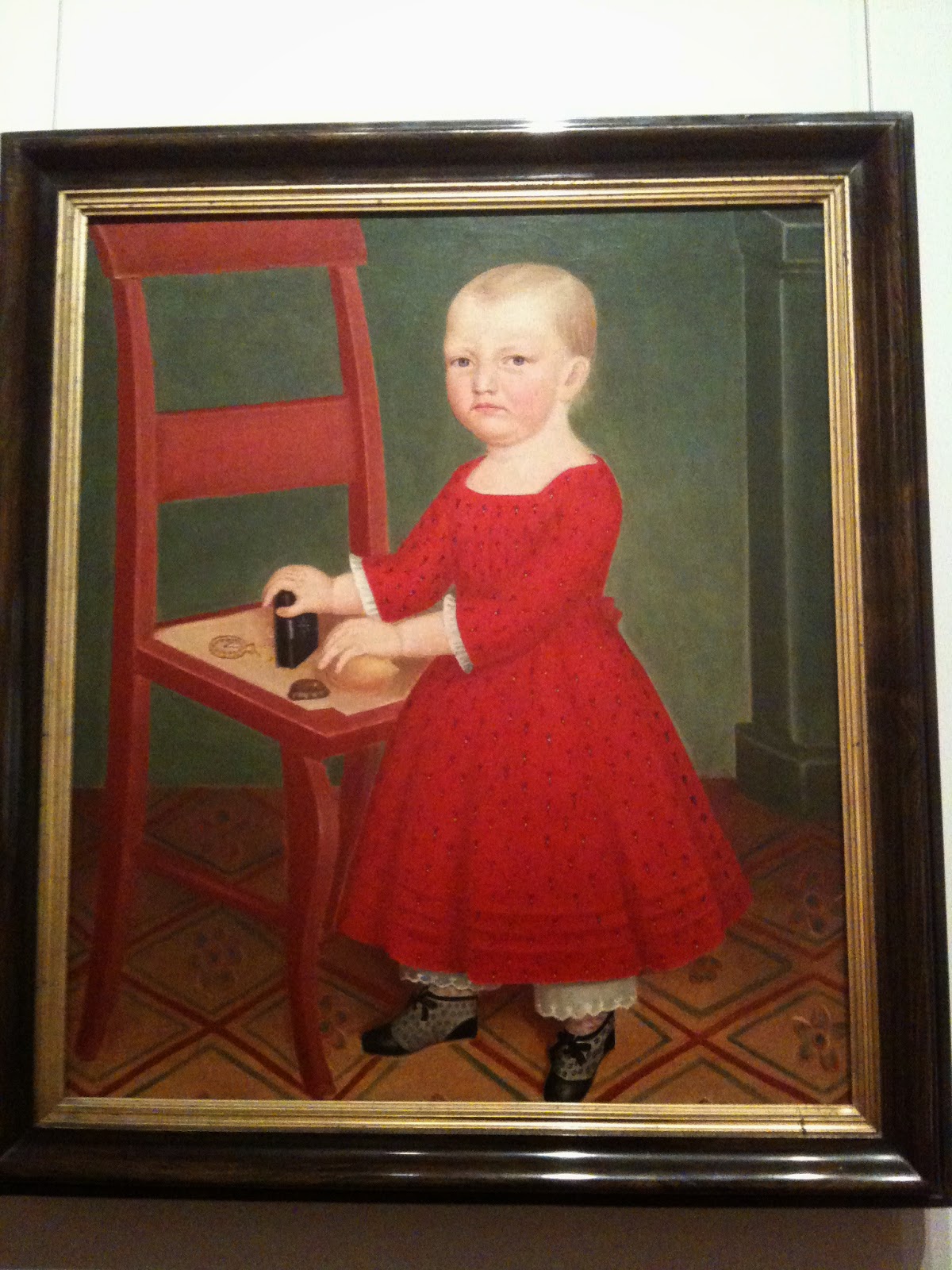 Such a fun post, Louisa. Extraordinary that the two-year-old Emma is wearing her ring on her wedding finger. I looked up 'wedding rings on fourth finger left hand' and read that "The earliest and smallest engagement ring was given to Princess Mary, daughter of Henry VIII when she was two years old."
Might Emma have also been betrothed at such an early age?
PS: I LOVE the prize-winning cow.

I love the cow too, a very fine small-headed beast. But I also like the maid's distemper! It reads rather like the paintings I think. Lovely post altogether.

Sorry for the blank where the Met's label should be. It should read: 'Bradley may have emigrate form Ireland in 1826 . . . .'

Lovely post! We have a picture of my husband's uncle in skirts when he was a toddler, so it was still common in the early years of the 20th century. I believe it depended on whether you had elder sisters or not, which Uncle John Robert did. I love the little boys furious expression, though!