Behind You!!! Catherine Johnson

Imagine the scene, a small room above a pub, a circle of chairs, a sorry looking group of people, one wearing far too much glitter, another dressed as the back end of a horse. The sign on the door reads Panto lovers Anonymous. 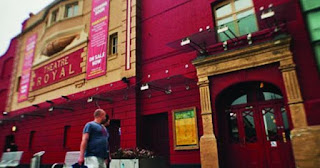 And one of those people, perhaps debating whether it's right to do away with the romantic duet that everyone snores through in the second act and wearing what passes for regular clothes dear readers, is me.

I know, for certain that half, maybe even more than three quarters will have stopped reading, blipped across to look at pictures of kittens on robot vacuum cleaners or dogs dressed as Buzz Lightyear.

Well I'm sorry. Panto is a terrible English tradition involving cross dressing, bad jokes and worse songs, but nevertheless one that I cannot help being proud of.  I must admit to cringing at the big budget, past it TV soap star vehicles or innuendo larded ones but can I assure you the Pantomine at Stratford East is different. It's terrifically right on, we've had same sex marriage and evil property developers.

There are many things I hate about Christmas, trees being up far too early. Horrible schmaltzy tunes in what passes for Hastings very own shopping centre. Having to think about what to buy for people unless it's clearly obvious because I just left it far too late and I have failed to hand make things for everyone yet again...

And there are also many things I love, Brass bands playing carols. Children singing carols. mulled wine, mince pies. Watching rubbish telly. But most of all I love our friends and family outing to the Pantomime at the Theatre Royal in Stratford, East London.

Pantomime is dafter than any roomba riding kitten. And what's more it's that whole magic of live theatre thing, it's the interaction, the on the spot come backs of the cast to the front row, it's live music and it's my families one and only unmissable Christmas tradition.

We've been going, my friend and me since our daughters first made friends in Year 3 at primary school. There were a couple of years when the theatre was closed for renovation that we went to the Hackney Empire (too big and glossy) and Hoxton Hall (too small and too unprofessional).

We will sit in the same place - front upper circle - vertiginously staring down into the chocolate box Victorian auditorium that is the Theatre Royal. Shouting 'He's behind you!!" Louder than anyone else, hissing and booing when the baddies and their henchmen (and women) do badness. And of course singing the words on the song sheet that plops down over the stage in the third act.

And afterwards, all of us and some of the kids' (who aren't kids any more) mates eat the traditional pizza and discuss the relative merits of different perfomances, songs, costumes,and  rubbish romantic interludes. (Best ever 2013 Dick Whittington by the way written by Trish Cooke and Robert Hyman featuring a baddie Alien Cheese Queen). 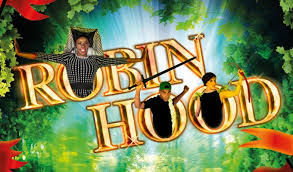 Catherine Johnson's latest novel is The Curious Tale of The Lady Caraboo, published by Corgi.


Posted by Catherine Johnson at 06:51

Have a whale of a time at the panto, Catherine! - A good one is a joy. The Birmingham Rep used to do wonderful Christmas shows, with not a cheesy ex-soap star in sight and it sounds like the Theatre Royal does the same.

My father played Panto Dame for years in Newport (Monmouthshire) back in the '70's - many of my pre-Christmases were taken up with his fashionista tantrums as I made his dresses for him!
Panto is a very unique form of entertainment with such a long history - you have every right to be proud of it - I am up there with you!!