Masters of the Everyday: Dutch Artists in the Age of Vermeer: Sue Purkiss

Until 14th February, for £10 you can go and see two exhibitions at The Queen's Gallery in Buckingham Palace: one which includes Rembrandts, Vermeers and other Dutch artists, and the other featuring The Comic Art of Thomas Rowlandson (satirical cartoons of Pitt, his great political rival Fox, George 111, the Prince Regent and Georgiana, Duchess of Devonshire). I took a quick look round the latter, (and was interested to note that Rowlandson was quite happy to apply his satirical scalpel to either side, depending who was paying him): but it was the Dutch artists that really interested me.

According to the introduction to this exhibition, there was in the 16th and 17th centuries a close relationship between the British and Dutch royal families, and British monarchs have been enthusiastic commissioners and collectors of Dutch art. It's strange how the universe sometimes seems to decide that you need to  know more about a particular subject, and provide you with a series of little pointers; I know very little about British history post-Stuarts, but earlier this year I happened to hear an intriguing radio play about the marriage of Mary Stuart to William of Orange, and how he came to be 'invited' to take the English throne.

And then in October, friends suggested a visit to Dyrham House, near Bath. Most of it is closed off at the moment; they're re-doing the roof, and what you go to see is the process of restoration, rather than the house itself. But there were a few rooms open, including one which had this striking trompe l'oeil:
a painting which makes you think you are looking into a series of rooms extending through the doorway. It's by a Dutch painter, Samuel Van Hoogstraten, and it reminded me immediately of Vermeer's interiors. William Blathwayt, who acquired Dyrham by marriage in the 17th century, was a great enthusiast for all things Dutch, having worked there for many years, and he filled his house with Dutch paintings and blue and white Delft pottery - including some of those magnificent tall vases used to display much-prized tulips. 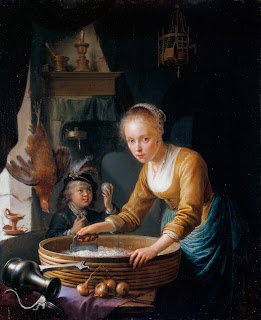 I'm no art expert, so I'm just going to pick out a few of the paintings which I particularly liked. The first is this one by Gerrit Dou - who at the time was apparently better known than some of the artists whose names are more familiar to us now, such as Rembrandt and Vermeer. It's called A Girl Chopping Onions, and it was painted in 1646. Apparently there's all sorts of sexual symbolism in it which would have been obvious at the time: the empty birdcage, for instance, which you can just about see at the top right, suggested lost virginity. But what draws me to the picture is the figure of the girl. She seems almost as if she is the actual source of light in the picture - there is a window to the left, but it's difficult to see how the light from it should have been so concentrated on her. She is looking out of the picture to the right; she's busy chopping the onions, but it seems as if that's not what she's thinking about. Her hair is golden, and her rosy face gleams with youth and health. She looks as if she's poised, ready to move quickly if need be: alert, serious, a little worried. She takes notice of the small boy behind her who is trying to capture her attention. 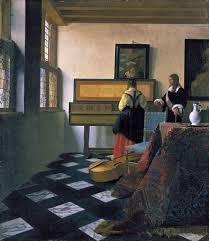 Then there is A Lady at the Virginals with a Gentleman, by Johannes Vermeer, painted in the early 1660s. This, like the Dyrham trompe l'oeil, shows the Dutch mastery of perspective, with the tiled floor receding into the distance. The light seems more natural in this one; it streams in through the window on the left. No posed portrait this; the young lady has her back to us - though we can see a reflection of her face in the mirror. She isn't aware of us, and she doen't seem to be taking much notice of the man, either; he stands watching her, rather stiffly: his expression, as far as we can make it out, serious. She concentrates on her music, he concentrates on her. What is the relationship between them? It seems to me that her body is slightly angled away from him; I don't think she's interested.

And finally, there is this portrait by Rembrandt, which may be of his mother. It was presented to Charles 1 by Sir Robert Kerr. 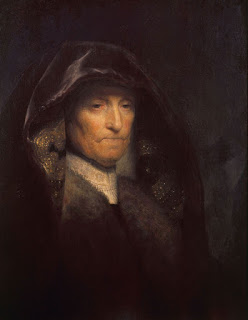 Well, what can you say? It's stunning. He didn't paint it when he was an old man himself - it was quite an early work. Yet it contains so much wisdom; such a powerful awareness of the condition of humanity. The painting of the textures of the fabrics and of the old lady's skin, the rendering of the light - all these are masterly. But there's more to it than this: somehow, despite all the wonderful, much larger and more colourful pictures works which surround it, it's this one, with its subdued palette and its grave but unassuming subject, which draws you like an irresistible magnet.

There are many wonderful paintings in this exhibition. But for me, this one alone is absolutely worth the entrance price.

We had a Dutch exhibition out here, at the National Gallery of Victoria, some years ago, and I loved it. Very everyday, and not only aristocrats either. In other places, it was religious stuff or it was Lord and Lady whoever, but some of these were Mr and Mrs Fishmonger grinning in front of their market stall. You really feel as if you're there, in the lives of people very like yourself.

These are luscious - thanks for posting!

I love these paintings. Thanks! What a huge amount of onions she's chopping - for a big household, I guess, and it just makes you realise how many people had to be chopped for. But - why isn't she crying?

I don't cry when I peel onions, and it's because I wear contact lenses. But I guess it can't be that...

Dubai Play Girls agency +971553279569 is for those who are looking for escorts in Dubai. Some people always like modern, sexy and stylish girls and they always love to get their favorite one. Indian escorts in Dubai are very beautiful, attractive and stylish and they always attracts to others with their body language and smooth touch. Get pleasure from the most excellent Dubai Escorts Services by our delightful Female model escorts in Dubai. We are as well giving you discount on call girls in Dubai and our escorts services are available 24/7.

One gathering of Escorts numerous consider Exquisite are the Exotics. These incorporate Indian Model Girls, for Examples. Indian Escorts Not to be mistaken for Native Indian Escorts are the absolute most Beautiful you'll discover. Call For More Details At +971-55-8758300
Moroccan Escort In Dubai
Moroccan Call Girl In Dubai

Call Mr.john for booking this girl +971 56 8199848
Most of the folks around the Discovery garden escorts are eagerly waiting for their

affordable services in order to enjoy with them as per their time convenience. In fact,
Call Mr. Kumar for booking this girl +971 56 8199848

Call Mr.john for booking this girl +971568199848
Finding the Escort Service In Business Bay is highly pleasure for people who are looking to spend time with the real fun.Escorts in dubai UAE Obsessively the Business Bay Dubai is right place to find the very hot and classic escort girls to Discovery garden escorts provide the valuable service for the different client.
Call Mr.john for booking this girl +971568199848

Call Mr.John for booking+971568199848
We cater to singles, couples and groups in our global locations lead straight and bi-sexual ladies indian call girls in dubaiWhichever location you pick you will be provided subsequently than prompt personal sustain, excellent

as the resources to pay for you once a in realism fantasy vacation. Book behind Indian call girls discovery garden and ride the wild currents of sensuality.