What is history? by Vanora Bennett

“What is history?” was the kind of big question I remember being asked to answer in long, shakily self-important essays at school.

Back then the abstraction felt a bit of a waste of time.

The question only took on an exciting and personal new meaning once I started writing fiction set in the past, when it became my business and pleasure to look for stories I could think of as historical in some way, then retell. The various bits of the past I identified as history worth retelling started with (1) the Tudor period and went through (2) several earlier times in medieval England, before moving on to (3) 20th-century Russia.

It felt like cheating to be writing about the 20th century - going to the very edge of the parameters of what was allowed in a style with some quite strict genre conventions. Could it really still count as proper history, what I was writing, I'd agonise, if the women wore short skirts and people made long-distance phone calls and drove cars? But when I went to the Harrogate historical writing festival in 2014, and heard James Naughtie talk about his novel – also classed as “historical” although set as recently as the 1970s – I realized I’d actually been hopelessly unimaginative in my classifications, not cheating at all.  It was time to define history far more broadly. History was pretty much everything, everywhere, that had happened longer ago than in my short-term memory.


Since then I've been looking in some much more adventurous times and places than before for anything that might count as history - any story that encapsulates something unique about a moment in the past and is relevant to the present at the same time. And here's the latest one to really, really catch my imagination. It's from the Sixties, and Zambia. I happened upon it only a day or two ago. I am still a bit fluttery and in love. And I’m fully confident that, although the events in it happened in my lifetime, it is very definitely historical. 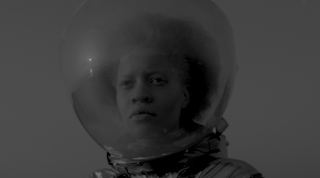 The plot goes like this. Back at the height of the Cold War, the US and the Soviet Union were in a frantic race to launch their respective countrymen into space. They weren’t the only ones trying to get to the moon. In Zambia, shortly after independence from British rule, school science teacher Edward Makuka Nkoloso’s dream of space travel led him to establish the new nation’s very own space academy in an old farmhouse seven miles ouside the capital, Lusaka.

Nkoloso was serious about the mission. He applied for a £7 million grant from UNESCO, assembled a motley space crew (a 17-year-old girl called Matha and two cats), and trained them by rolling them down hills in oil drums.

This is the subject of young filmmaker Frances Bodomo’s recent short film Afronauts, a bold fusion of history, science, political critique, and imaginative fantasy. She shows Matha, a young albino girl — pictured above and played by model Diandra Forrest — training for her own moon shot on the eve of the Apollo 11 launch, aware that she may be sacrificing herself to sustain family pride and a national dream.

It's the story of outsiders, trying to get inside the drama of their day. It’s a story of deception and self-deception. And it’s a story of dreams - big, wonderful, and all-enveloping, even if they're impossible in real life. 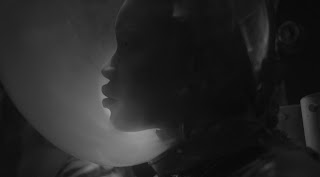 “I heard about the real Afronauts, and for me it was a wonderful story from this era of moon fever — how imagination is boundless and doesn’t need to be tethered to possibility,” Bodomo, a hip Ghanaian raised all over the world and now living in America, is quoted as saying in one of her many interviews. Researching the story, she learned the would-be spacemen never launched. “They just dissipated into the blind spot of history. That made [the story] much more exciting for me because it’s only accessible through imagination, emotion, desire, and interior life.”

Her well received short is brilliant (check it out for yourself online – there's a teaser and an interview or two with the auteur) and now she's also got a grant to turn it into a full-length feature film.

What I like most, apart from the beauty of her flickery black and white filming, is the playful yet positive way that Bodomo reimagines her wishful-thinking Zambian Walter Mitty. As she says,  “Nkoloso was essentially a prankster, but what he did was really profound. When you’re outside the grand narrative of history, to get in by playing the game is futile. You have to poke holes in the game. Leave cracks in it, open it up, redefine it.”

So is this prankish story from way outside the grand narrative real, proper, kosher history?

You betcha. To me, the space race already seems as archaic as Henry VIII’s codpiece or hanging, drawing and quartering. So does the end of the British empire - the story behind this story, in a narrative about people in a poor newly enfranchised nation trying to grab a bit of the excitement of the era when, even if free, they still have no money and so are still locked out. But the struggle of outsiders will always be of our time; the allure of dreams, too. I’d say that combination makes this the real deal - a pretty damn fine historical story.
Posted by Unknown at 00:00