Editions of Shakespeare.....What I've kept and what I've lost. By Adèle Geras

One of the things I'm most grateful for is the devoted work of my English teachers at school and in particular, how they introduced us to so many Shakespeare plays, teaching us and guiding us in a way which I now see was exemplary. They explained the difficult stuff and no one should pretend that there aren't bits that DO need explanation. We read the plays aloud in class...and yes, that's the whole play, and not just extracts. Those of us who had theatrical ambitions loved this. Imagine being able to 'be' Lady Macbeth when you are only twelve! By the time I left school at 18 and a half, I had good knowledge of a good few plays. We did two for A level (Hamlet and Troilus and Cressida).  We started on Macbeth and Midsummer Night's Dream when we were not much older than 11. We also did The Merchant of Venice, Twelfth Night and Romeo and Juliet.  We saw the film of Henry V and Hamlet starring Laurence Olivier....and  I played the part of Paulina  in The Winter's Tale while I was at school.

We used educational editions of each play and because we had to hand them in for the next year's pupils, these have all disappeared.  They had notes at the back and were often scribbled in by last year's girls. I found these fascinating. At the front of the book, the names of previous readers were  often still legible. I didn't resent not having a new book to read from and study with. I liked being part of a continuing chain.

Below is my late husband's edition of the Complete Works...it's quite tatty but I would never part with it. The last picture at the end of this post, which depicts a scene from The Winter's Tale, is one of the beautiful illustrations in this edition. My own edition, a present from my father when I was 12, has such tissue paper thin pages that it's extremely difficult to read....the photographs from actual performances of each play are what I liked about it. When we moved from Manchester to Cambridge in 2010 and culled a great many of our books, we debated for ages about whether to get rid of one of our complete Shakespeares, but in the end, neither of us could bear to part with our own copy. So I have both, still on my shelves. 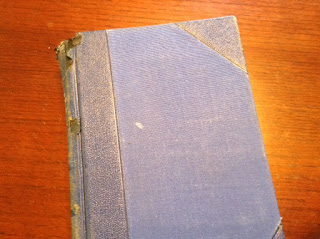 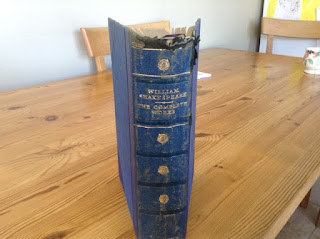 My favourite Shakepeare play is Hamlet and I love this edition.   I've photographed it next to my iPhone to give you some idea of the scale. 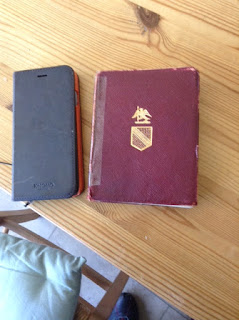 It's a most beautiful red leather bound Hamlet and it was given to me by my friend Carolyn (with whom, by coincidence I had lunch only yesterday.  We are in touch again after being out of touch for nearly half a century. She lives in Cambridge too.)  This is a photo of the frontispiece and below if you can read it is the inscription by Carolyn which says: To Delly, with love Carolyn. Christmas 60. It's rather scary to think that this is 56 years ago we're talking about... 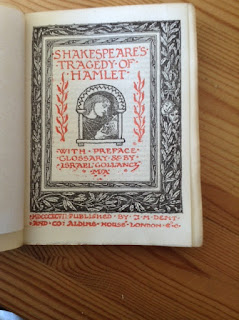 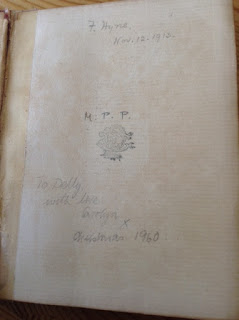 In 1960 I was 16 and I had bookplates and used them. I notice that I was using my middle initial in those days. I love this edition, which was second hand when Carolyn bought it....the previous owner marked it 1910. I often take it out and look at it and it's small enough and beautiful enough to make the reading of Hamlet a real pleasure. 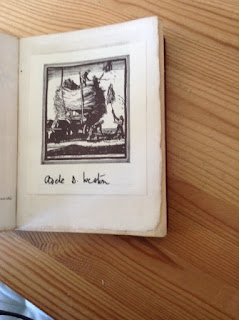 This book, below is a Sylvan Press edition of the Sonnets. I've posted three pictures, to show how completely beautiful this font is.   I fell in love with the book....I can no longer remember  where it was that I found it, but it was very expensive  and I paid for it out of my school pocket money. I think I knew that if I wrote to my parents and asked for a Postal Order to pay for a beautiful book, and particularly an edition of the Sonnets of Shakespeare, they would send one by return of post. I think it's this book that's responsible for my love of sonnets.  The very enticing 14 line form is my default setting, and when I'm asked to write a poem for whatever reason, a sonnet, and an Shakepearean one at that, is what I generally attempt. 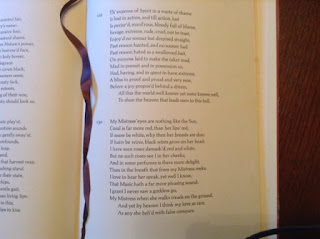 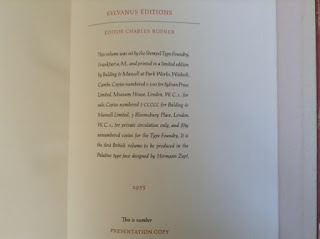 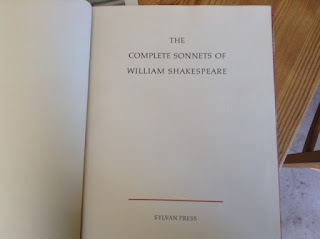 For someone who was as keen to act as I was, all my life, I've appeared in very few productions. Below is a scene from A Midsummer Night's Dream (from my own complete Shakespeare).   I  appeared at Stratford in an outdoor production in 1965, I think. I played Flute, the Bellows Mender. The only reason I was cast in the part was because the director was my boyfriend at the time. I enjoyed being a boy and I don't think I let the side down, but it wasn't exactly a BAFTA winning performance. Still, the whole experience was just ...well, a Midsummer Night's Dream in many ways. 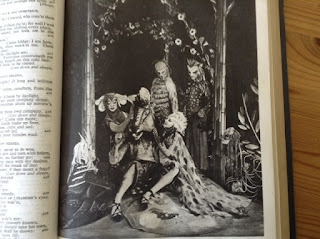 I'm ending with two illustrations of the Statue scene from The Winter's Tale. I played Paulina when I was at school and remember the production with huge affection. Miss Braund, Maggie B, as we called her, was our redoubtable drama teacher and a brilliant director. She died recently and I'd like to dedicate this post to her memory because she was the one who brought the words to life on stage for so many of us. However much you love reading the plays; however much you can admire the poetry and the way the plays are  put together, it's the real, breathing performance that lifts matters  into another realm altogether. Our Leontes was a girl called Penny Stanley-Baker and she was, in my opinion, better than Kenneth Branagh, whose version of the jealous king I've just watched on  film. Judi Dench was better than I was as Paulina but still,  I reckon our production was pretty damn good.  I wish I'd kept the acting version of the play that we used, complete with written notes scribbled in the margins.  I'd give a lot to see that book now. 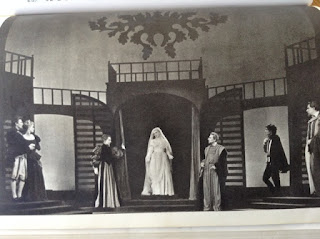 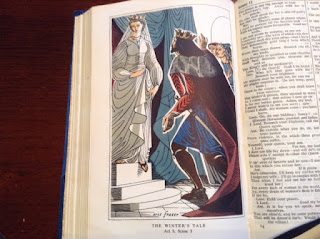 Isn't it wonderful to discover a gem in a second hand bookshop? I have a 1922 Works with a dedication - I think it was a Christmas gift. I also have an 1878 Aeneid which was a school prize(I wonder if the prize winner ever bothered to read it? It's in good condition, so perhaps not.)Goodness, you did your Shakespeare early! We didn't start till Year 10. I did have a very good Year 11 English teacher for Richard III; thanks to her, I ended up reading Daughter Of Time and joining the Richard III society. I forgot know what you mean about getting to read these roles in class. I got to be Richard at one stage and was very annoyed when I was called out of class while I was busy declaiming! ;-)

Now we have No Fear Shakespeare online: very useful, and pretty reliable, but not beautiful or any good as a souvenir - or a doorstop!

We started Shakespeare fairly early - in our 2nd year, I think (age 12).
We did Romeo & Juliet, and had editions with the text on the right hand page and notes on the left - I remember one note explaining the 'Tybalt' was the Elizabethan equivalent of 'Tibbles' as a common cat's name, which made all the 'rat catcher' comments make more sense. We were taken to see a terrible production at a local theatre (I do not think that the suicide scenes were supposed to be funny..)

Then we studied The Merchant of Venice for GCSE, and were taken to a rather wonderful RSC production at Stratford.

For A Level we did Anthony and Cleopatra, which was disappointing at the time, as the school changed exam boards just before we started, and we missed out on Hamlet as a result..

I have some lovely little pocket sized editions of a few of the history plays. I haven't unpacked the correct box yet so can't check who the publisher was, but I think they were 1900s.

Incidentally, if anyone get the chance, the current Hamlet at the RSC, starring Paapa Essiedu, is amazing - well worth seeing.