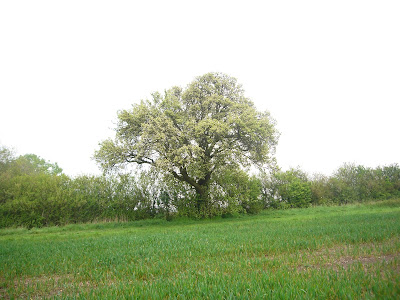 Last week, my friend Barbara and I went on a bit of a pilgrimage to visit this ancient tree. A wild pear (Pyrus Pyraster), the ancestor of our domestic pear trees, it stands at the top of a hill, close to the village of Cubbington in Warwickshire, overlooking the Leam Valley. It is thought to be at least 250 years old, is the largest of its kind in Warwickshire and the second largest in the country. It was voted England’s Tree of the Year for 2015, it came 8th in the European Tree of the Year 2016, but its days are numbered.

To get to the pear tree, we walked through South Cubbington Wood. We were greeted by the sharp, clear rat-a-tat of a woodpecker as we stepped under the trees. It was not a spectacular May day, the sky was overcast and a fine rain was falling, a small rain, the kind that gets things growing. The woods were just coming into full leaf and the woodland floor was carpeted with bluebells and white wood anemones. Violets and primroses showed in the mossy hollows. 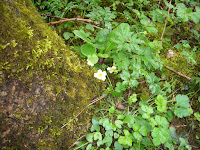 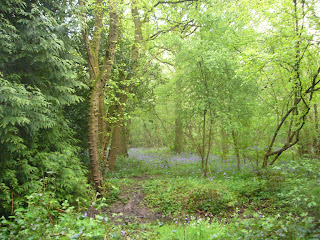 South Cubbington Wood is a quiet, pretty place. Generations of children have played here and people come regularly to walk and to exercise their dogs. It is close to the village of Cubbington and within easy walking distance of the nearby Leamington Spa but it is set in fields and seems distant from the town. 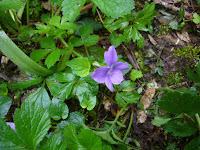 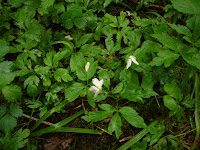 It has been here a very long time. An outlier of the once vast Forest of Arden, it would have been old when Shakespeare was alive. This patch of ancient woodland has probably been there since the end of the last Ice Age.


But it will soon be no more. This might be the last time for us to see the ancient woodland in its Spring new leaf and the old pear tree in full blossom before HS2 comes powering through this peaceful, timeless landscape. Hence the pilgrimage. In the construction of the railway much of the wood will be destroyed, including the half a dozen rare wild service trees (Sorbus torminalis) that grow there. The wild pear tree will be grubbed up. Hedgerows will be torn out, fields obliterated, public footpaths and ancient rights of way cut as the railway passes Cubbington in a cutting a hundred metres wide and up to nineteen metres deep and leaves the Leam valley scarred by an embankment nine metres high.

It is not just South Cubbington Wood that is set to go. Sixty three Ancient Woodlands will be threatened as HS2 cuts though England's heartland.

The HS2 project has not been without controversy. Feelings have been running high both locally and across the country. 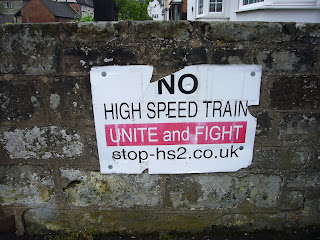 When Baroness Young made the case for our ancient woodlands during the House of Lords debate on HS2, she spoke for many:

'The Minister said that he was proud that HS2 had not demolished a single grade 1 listed building. Ancient woodlands are the grade 1 listed buildings of the environment. They are the richest terrestrial habitat for wildlife. It is not just about the trees, it is about birds, plants, butterflies, beetles and, most distinctively, those undisturbed soil communities of fungi, mycorrhizae and micro-organisms that have been maturing away for between 400 and 10,000 years, and it is about the lost fragments of the wild wood that once covered our entire country after the last ice age. To qualify as ancient woodlands, they need to have had continuous tree cover and largely undisturbed soils since at least 1600. They are therefore the equivalent of grade 1 listed buildings. They are the cathedrals of conservation, but they have been reduced to a fragment of their former extent. Only 2% of the land area of the UK is now covered by ancient woodland and it is heavily threatened by a range of threats.
Ancient woodland is not just important, it is irreplaceable.' 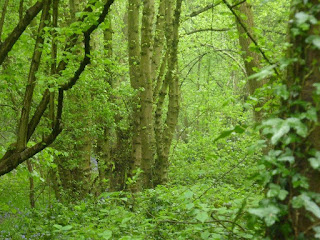 Annihilating all that’s made

To a green thought in a green shade.


The Garden by Andrew Marvell
(With thanks to Barbara Crowther)

I'm way across the pond in "the City that Never Sleeps", but my heart is in the ancient woods of the now destroyed Catskill Mountains of New York State and it throbs tonight in agony over the wanton destruction of more woodlands anywhere, but in England the land of so much beauty! NO I scream into the virtual. No, please don't.

Tragic and brings me to tears both sorrowful and angry. I keep thinking of Tolkien's Lord of the Rings. Truly we are Hobbits watching the inexorable advance of Mordor.

Ancient woodland takes hundreds of years to create. It should be protected completely and utterly. Fingers crossed it never happens (sometimes these things get pulled). But it would be nice that if it does then this tree could be saved. I know it can be done, it costs a lot. But hell this tree is part of our heritage so would be worth every penny.

It is heartbreaking. I'm in Bucks and it will drive a hideous swathe of destruction through AONBs here too, with irreplaceable trees, wildlife ... What is the point of designating AONBs and forbidding development on them if the government can then just ride roughshod over it. Its not just a case of not wanting it either - no-one actually needs it. Save fifteen minutes journey time? Come on. And if it isn't stopping between Birmingham and London, no-one in its wake of destruction will get any benefits from it. And if it does stop ... well... its not going to be very high speed, is it? Just stuff a few extra carriages on the existing trains. Or run more of them . Pfffft.

Destruction of forest and woodland is terrible and distresses all like minded people everywhere from Upper New York State to all of us in the path of HS2. Couldn't agree more madwippit (great name btw) 20 minutes off the journey from London to Brum. 20 minutes soon eaten up by delays, signals leaves on the line and all the other Things that happen. You re right, Elizabeth. Tolkien foresaw it all - although there were many more trees in his day...

Exactly - so much destruction, so much money, to save what? A tiny bit of time. Ridiculous and a nonsense.

Thanks all for your comments.

I had no idea that HS2 would destroy so much important natural habitat. What shame - no, more than a shame, it's a crime that so much precious woodland should be trod roughshod over in the name of progress.

This government is wrecking our country and for no good reason.