When I set out to write a novel about a witch in the seventeenth century (choosing the time that a local witch, from Waltham St Lawrence, was prosecuted and hanged, it wasn't just important to do the historical research, as I've described in a previous blog (Who were the Witches). I had to do what every writer needs to do, to inhabit the world of my book.

Whitchurch St Leonard, my fictional village, lay in the chalk country of the Thames Valley, where pockets of clay alternate with chalk and gravel, and flints lie everywhere in the soil, as local vernacular building attests.

I have all three in my garden, so when I wrote the first chapter, where the witch's daughter and son-in-law bury her covertly in the churchyard, I had an idea of what they were contending with. They were digging into an existing grave, but all the same:

'Hard work,' says Margaret, Alice's daughter, 'even digging into ground that's been turned before. Flints stop the spade, and the clay's heavy.' 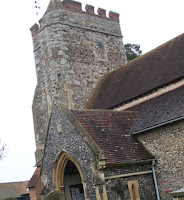 I know all about that, when the spade hits a flint, which could be small, or it could be eighteen inches wide, gnarled, knobbly, and weirdly beautiful, but you don't appreciate that when you're sweating and struggling, trying to find where it ends and get a purchase on it. The strain of that work has written itself into the aches and pains of my poor arms, shoulders, and back. Some things don't change, though I've never dug six foot down into a grave.


Opposite my house is a 16th century farmhouse, and while I was writing Malefice, the friend who used to live there took me upstairs and opened a door set into the wall, that led to a cupboard. Inside there I could feel the fill in between the timbers: chalky rubble, horsehair, twigs and rags; the texture of the past. In the days before such houses were lime-washed, their white surfaces must have been much rougher than nowadays, and scratchy, as I described when Margaret remembered pressing herself to a house wall, the day Royalists and Parliamentarians fought in the village street.


Where you can easily find remnants of the past is in the woods, on the bridle paths that were once roads, often deeply sunken with the passage of time. Paved with flints, very often, in this country where it is the local stone, and walkable in dry weather in spring and summer, often mired and squelchy in winter. That's what travel used to be like, and you can get a sense of it still, even if you're wearing high-tech walking shoes or boots.

'You will hear the beat of a horse's feet,
And the swish of a skirt in the dew,
Steadily cantering through
The misty solitudes..'
(Rudyard Kipling, The way through the woods)


What you don't have is the danger. Recently we walked down Pack and Prime Lane, which leads to Henley from Rotherfield Greys; it was a haunt of footpads, and the packmen who used it had to pack their pistols with powder and prime their flints before they entered. Of course now, it's just beautiful woodland, heaven for dogs. But it was along those laborious, hazardous roads that Margaret tramped, fleeing the village that used to be her home, her thoughts travelling back to her mother's past, and her own.

'Rain and mud, and the road slithers under your feet, you stumble over the huge soft ruts… I wish it wasn't raining.. The people we meet talk about thieves, highway robbers, trying to frighten country bumpkins on the nove who are good for a laugh.'

Once, in the late eighties, I was driving on the A4 a friend at dawn; coming back from a night watch at Greenham Common, and over the Berkshire fields was a thick layer of mist. The picture stayed in my head for a few years, till it was time to use it for Malefice.

Day after day, when I've walked my dog in the w
inter, I've seen drops of melted frost on the sloe bushes, something Alice yearned for when she was shut up in a stinking seventeenth-century jail. 'She shut her eyes and tried to see blackthorn twigs like gnarly claws in the morning mist, each grasping a small clear bead of water.' 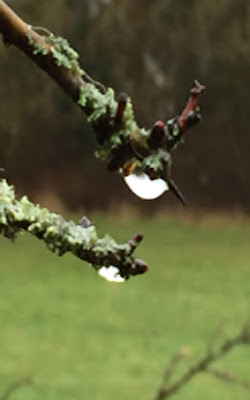 When I was writing Malefice, I was still able to pick up the phone and ask my mother-in-law about farming things; she's gone now. My mother-in-law had really made butter, and I needed to understand about it, because spoiling the butter was something witches did. She did me proud. 'Winter's the best time,' she told me, 'in summer, it just runs through your fingers.' I gave that line to Judith, whose butter the witch Alice supposedly spoiled.

'But what I should have done,' says Judith, 'I should have put the red hot poker in the cream, that day I knew the witch was spoiling the butter..'If you're here,' I should have said, 'have at your eye.' I might have blinded her.' I didn't know that was what you did, and to be sure, it did seem strange when I found out. Surely, the red hot poker wouldn't do the cream much good? But probably you only did that when the butter was already spoiled, and you wanted to get your revenge on the witch.

The Past is another country - and yet there are parts of it that I recognise. What that world of more than three and a half centuries ago shares with ours, still, is a whole lot of imagery, stories, that live in our heads still, even though we've overwritten them with a lot more information. But some of the imagery, I'm convinced, is to do with how the human brain works, and it's hard-wired into us.

Think of the phenomenal success of films like The Exorcist. Possession by evil forces, people with supernatural powers to do harm, people who have an animal alter ego, still rampage through fantasy novels and films, and probably computer games, too, though I don't play them. Have you never looked in a mirror when you've been all alone in the house, and had a frightening fantasy that you might see something terrifying standing behind you?

What was going on in my head when, having done all the research and the reading, I sat down and wrote Malefice, hardly aware of what was going on, just kept typing, and then came out of something like a trance and read what I'd written? It wasn't just stuff from my personal subconscious and image-store that swam up and directed the story, that's for sure. 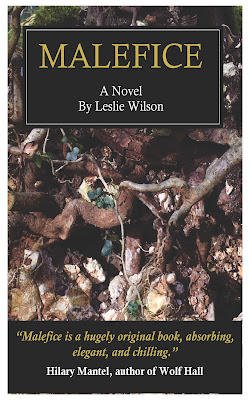 To get Malefice on Kindle, go to amazon.co.uk
Posted by Leslie Wilson at 00:30

Thank you, Sue! The thing that amazed me, when I first saw it on my phone, rather than on the Kindle, was that it might have been written for today's phone readers, being short, and the pages never had a huge amount of text on them, so they sit nicely on the small screen.

I love the way the words poured from you when you were ready. Perhaps writers are witches too, spinning history, wattle and daub, spoiled butter, and flint into stories. Congratulations on the new kindle release - sounds wonderful!

This is a novel with a real feel for the past, and your post shows how you thought yourself back into that time so convincingly, Leslie. Great to see it's on Kindle - and what a brilliant cover design.