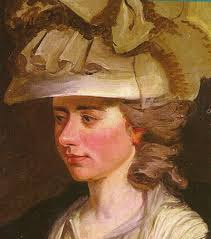 I’m so glad to have finally read some of the work of this extraordinary women. The daughter of the musicologist Dr Charles Burney, whose amanuensis she was, she daringly wrote an epistolary novel, Evelina, in her twenties. She published it anonymously, without her father’s knowledge, and when it became known that she was the author she became famous. Hester Thrale, David Garrick and Dr Johnson, (who infamously remarked that "Public practice of any art, and staring in men's faces, is very indelicate in a female"), were amongst her admirers. Like so many novels of the period, the plot hangs on illegitimacy, honour, chastity and now seems fairly conventional: Evelina’s virtue is rewarded as it turns out she is, after all, the legitimate daughter of a rich man and therefore deserves her Lord. At the time the novel was considered remarkable for its originality and wit. Evelina’s embarrassing grandmother, Madame Duval, is a satirical portrait of the stepmother Fanny and her sisters hated. 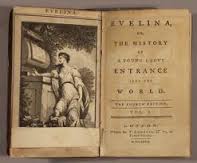 Jane Austen read Fanny Burney’s novels and was influenced by her. Near the end of Cecilia, her second novel: “The whole of this unfortunate business," said Dr Lyster, "has been the result of pride and prejudice.” She wrote more novels and also plays, one of which, The Woman Hater, was first performed in 2007 at the Orange Tree theatre in Richmond. During her lifetime her father and other friends constantly feared that her work would cause offence or make her appear unladylike.

Queen Charlotte offered her the post of "Keeper of the Robes", with a salary of £200 per annum. Fanny hoped that the improved social status and income might allow her greater freedom to write but, although she became fond of the queen and princesses, her role at court was exhausting and tedious and left her little time to write. After five years she asked her father, who was then the organist at Chelsea Hospital, to help to release from the post.

Fanny’s own later adventures were, I found, more gripping and moving than her novels and her own love story was far less conventional than her heroines’. Her journals, written in a lively style punctuated by those eighteenth century dashes that are like bolts of energy, are very readable. In her late thirties she married a French refugee, Monsieur, later General, Alexandre d’Arblay, a Catholic. He was considered so unsuitable that her father refused to attend the wedding.

D'Arblay was offered service with Buonaparte’s government in France, and in 1802 Fanny and her son Alexander followed him to Paris. She refers to them, endearingly, as My Alexanders. They expected to be in France for a year but due to the outbreak of war between France and England they had to stay for ten years and she desperately missed her family.
She wrote a terrifying account of her mastectomy in 1811. She was conscious throughout as there were of course no anaesthetics then: “I began a scream that lasted unintermittingly during the whole time of the incision – & I almost marvel that it rings not in my Ears still? so excruciating was the agony.” Being squeamish, I must admit I could hardly bear to read this. Despite this ordeal she lived until the then ripe old age of 87.
For me, the most fascinating part of her journals is her account (some of it written many years after the events) of the atmosphere before and after the Battle of Waterloo. Thackeray drew on these pages when he wrote Vanity Fair. 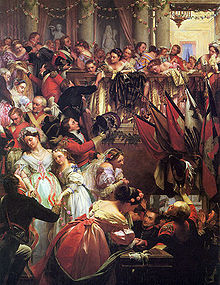 Fanny describes, wonderfully, the confusion in Brussels, the heartbreaking sight of so many maimed and dying soldiers, the wild rumours and the general conviction that Napoleon was invincible. On the day of the battle, in central Brussels, she heard ” a Howl, violent, loud, affrighting and issuing from many voices. I ran to the window, & saw (the street) suddenly filling with a rushing populace, pouring in from all its avenues, & hurrying on, rapidly, & yet in a scrambling manner, as if unconscious in what direction; while Women with Children in their arms, or clinging to their cloathes, ran screaming out of doors...that the French were come!”
I was riveted by her description of her journey to join her wounded husband, who had been fighting to defend Louis XV111 and lay, dangerously ill, in Trèves (now Trier) in Germany. Fanny, in her sixties, left Brussels, without a new passport and almost without money, as soon as she heard that Alexandre was wounded. Her intrepid journey by stage coach took five days and at each town she had to show her French passport and get it signed by an official.

In Cologne she stayed with a French family and summed up the timeless suffering of ordinary people in a time of war: “Death, Misfortune and Opression had all laid their Iron hands: they had lost their Sons, while, forcibly, fighting for a Usurpation which they adhorred; they had lost their property by emigration; & they had been treated with equal hardness by the Revolutionists because they were suspected of lack of loyalty, & by the Royalists because their Children had served in the armies of the Revolutionist.”
In Coblentz she feared missing the weekly diligence that left at 4 in the morning and desperately ran around in the middle of the night trying to wake up the Prussian official whose permission she needed to continue her journey. As always, name dropping worked wonders: “”I had no sooner pronounced this name, than my new associate, giving me gaily a nod, seized my passport, &, opening the door without waiting for leave, carried it to the Bedside....& again, in a few minutes, my benevolent new friend came to me with his triumphant success. I blest him!”

Finally: “Oh Alexander! What a meeting of exquisite felicity! - to Both-”
Posted by Miranda Miller at 00:30

I must read her memoirs! I have read both Evelina and Cecilia, with great pleasure, but you have made the memoirs sound fascinating. Did you know that Penelope Fitzgerald used her account of mastectomy for The Blue Flower. It is staggering that she survived. I gather it's thought probably the lump was benign..

What an astonishingly brave woman!

No, I didn't know about the Penelope Fitzgerald connection. Her letters and journals are really interesting.

I did not know about the Penelope Fitzgerald connecion, but it makes sense to me: this kind of woman, precariously privileged, literary, a writer of autobiography in many forms attracts other women like herself; Virginia Woolf is part of this group.

I agree on what is far more interesting: her diaries and her life than the novels. There is strength, intelligence, variety and sometimes they are effective, but the stories are so conventional and also the overt moralizing.

I enjoyed reading this blog. I've written numerous times on Burney on my own, and have a page on an old website about her. I like going to conferences where there are papers on her. Such a wealth of material of real interest.