I recently travelled to Australia for the first time to visit my sister, who emigrated out to Melbourne earlier this year. It might have been winter over there, but it was still a wonderful trip - I'm not much of a city person, generally, but Melbourne is a lovely one. By the sea, not too big, full of character, and with far more visible history than I'd expected - from the old wooden trams in the centre to the cobbled laneways; the grand Victorian villas with their fancy ironwork balconies and the tiny miners' cottages in their compact rows.


I had particular, albeit sombre, fun visiting Melbourne Old Gaol. This grim place, now brilliantly set up as a tourist attraction, gives a clear reminder of how far we have come, as a society, in the last hundred years or so! It must have been a terrible place to be incarcerated. Inmates were kept in tiny cells only just long enough for them to lie down in, for twenty-three hours a day in some cases - allowed out for a single hour of exercise during which time they weren't allowed to talk to the other prisoners. Disobedience was punishable by lashing. If you'd been of sound mind when you went in, it's doubtful whether you would have been when you came out! If you came out, of course. The prisoners lived their lives in full sight of the prison gallows, where a good many met their end.


The gaol was built in the early nineteenth century, and the first executions there were of two native Tasmanian men in 1842. They were found guilty of the murder of two white whalers, but were essentially hanged as a deterrent to other troublesome natives. A proper cell block was built on the site by 1845, but this was soon dangerously overcrowded, since the population of Melbourne exploded from 23,000 to 90,000 after the discovery of gold in the area in 1851. A second cell block was built in 1859, and a separate women's wing in 1864.

The gaol's most famous inmate was without doubt Ned Kelly, the bushranger folk hero who was also, indisputably, a thief and a murderer. He was the 101st person to be hanged at Melbourne gaol in November 1880, and the gaol has replicas of the iron armour he wore for his final showdown with the police - which did stop several bullets before it failed to stop the bullets that halted him. However, I also 'met' another notorious criminal there. A friend of my sister's had asked me to look in a register or log book, if one were available at the gaol, for any record of a relative of hers, recently uncovered by her mother's family history research - a man named Fred Deeming, who was apparently an inmate at one time. I agreed, not holding out much hope, so imagine my surprise when a whole story board was dedicated to the man! 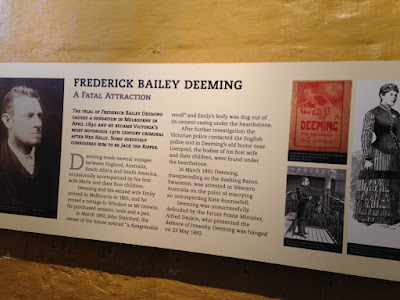 I should explain that in each cell of the gaol, a story board and plaster cast death mask of a particular inmate are on display. In many cases, these provide a damning commentary on the harshness of justice and Victorian society, since many people - including women - were hanged for what boiled down to the crime of poverty and desperation. Fred Deeming's case, however, is a little different. To summarise the story board above, he came to Melbourne from the UK with his second wife, Emily, in 1891. He rented a cottage, but soon moved on. Early in 1892, the landlord noticed an awful smell, and an excavation of the hearth stone turned up Emily's decomposing body. The Melbourne authorities communicated with those in Liverpool, UK, where Deeming had lived before, and a similar excavation at his previous address turned up the bodies of his first wife and their four children, also murdered by Deeming. He was arrested in March 1892 in Western Australia, on the verge of marrying his third wife - who clearly had a lucky escape! Deeming was hanged in May 1892, in spite of a plea of insanity. Possibly not the kind of relative my sister's friend was hoping to hear about!

I mentioned above that there are original plaster cast death masks of many of the hanged inmates on display at Melbourne gaol. The Victorians did love to document death, and to look at it square on. I found these extremely poignant, and a little disturbing; not least because, having been hanged, the masks all show a terrible weal across the throat that the rope has caused. There is also, in some hard to define way, absolutely no chance of mistaking these for masks taken in life. I didn't want to put many up on here as it seemed somehow disrespectful - but in Fred Deeming's case I'll make an exception:

For anyone interested, a quick google will reveal images of Ned Kelly's death mask too. Perhaps the most fascinating case I learned about, however, was that of Colin Ross, executed in 1922 for the rape and murder of twelve year old Alma Tirtschke. For the first time in Australian history, forensic evidence was used to obtain a conviction - namely, some hairs found on a blanket of Ross's which were found by an 'expert' to match those belonging to the dead child.

The little girl's body was left dumped in a cobbled back street called Gun Alley, near a covered arcade of dubious repute where Ross and his brother kept a bar. Under intense public pressure to make an arrest, the police soon lit upon Ross as a suspect, and, in the commanding officer's own words, then looked for ways to prove his guilt, rather than his innocence. Crucially, the press went into a frenzy over the case, and printed all kinds of uncorroborated stories and 'evidence'. Enough people with an axe to grind against Ross were willing to testify having seen him talking to Alma, and even to her having been drinking in his bar all afternoon - which her family strenuously denied.

Hounded to trial by the police, and then faced with a jury of his 'peers' who had, for weeks, been fed a stream of damning, sensationalist stories about the case, Ross stood little chance. The forensic evidence of the hairs found on a blanket from his bar was the final nail in his coffin. He was hanged, still protesting his innocence, in the spring of 1922. As a final cruelty the hanging was bungled, and Ross's death was by no means painless or instantaneous.


How utterly tragic that the first use of forensic evidence, now so indispensable to judicial process, should have formed part of such a terrible miscarriage of justice. Following extensive research begun in 1995 by journalist Kevin Morgan, Colin Ross has become the first man in Australian history to be pardoned after judicial execution. Ross may have been a bit of a ne'er do well, a bit of a chancer, but he was certainly no child murderer. The hairs on his blanket were not Alma's. The testimony of the witnesses who spoke against him is inconsistent and riddled with flaws; one witness was almost certainly induced by the police to recite a 'confession' Ross supposedly made to him whilst on remand. Colin Ross was tried by public opinion, an over-heated press and a police force so convinced they had their man that it blinded them. And whoever did rape and kill Alma Tirtschke was never brought to justice for the crime. 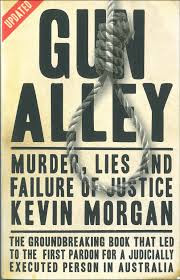 I wholeheartedly recommend Kevin Morgan's book, which I bought having read about the case during my visit to Melbourne Old Gaol, whether you're interested in true crime or not. It's a meticulous, unputdownable reconstruction of the case which points, ultimately, chillingly, to the identity of the real killer. Far too late for the purposes of justice, of course, and far too late for poor Colin Ross and his family. I've always supposed this to be the crux of the argument about capital punishment: Which is the worst injustice: to let a guilty man live, and perhaps walk free, or to take the life of an innocent one? Because sooner or later, one or the other is bound to happen - however sound we believe the evidence to be. Personally, I think hanging an innocent man is by far the worse of those two options.
Posted by Katherine at 00:30

Ah, yes, some familiar names there! I researched them all when I was writing Crime Time: Australians Behaving Badly, my children's history of crime in Australia. I wrote about them all. Fred Deeming was a truly nasty piece of work, and arrogant with it. He was so sure he'd be acquitted, he tried to hurry up the trial. I think they had to give him a stiff drink to get over the shock of being convicted.

Glad you liked Melbourne! I hope you got to the State Library, which was built by Redmond Barry, the magistrate who convicted Ned Kelly. He was actually a decent man, whatever you think of the bushranger. Apparently, he used to let people come and borrow his books before the library was built, and gave away a lot of his salary to the poor. And the library is based on the British Museum building, and simply beautiful inside, plus it also has a set of Ned Kelly's armour! We took some kids there once and when the tour guide took us to the armour, one of our boys informed her proudly that he was a distant relative of Ned. (He was, too.)

Fascinating and important. I agree with you about the danger of taking an innocent person's life, with the death penalty. I remember reading Auberon Waugh saying that he would like to be in favour of hanging, but he was too scared he might be wrongly convicted. Honest and true. However, there is another aspect to this, and that's the effect on a society of carrying out judicial murder, even if not in public. If we're prepared to kill people, in order to hammer home the message that killing is wrong, what does it make of our value for human life? Repeated studies have also shown that the death penalty has, apparently, no effect on murder rates, if anything, it makes them higher. Anyone who wants to know what it's like to be in a prison the night before an execution should read Wilde's 'Ballad of Reading Gaol,' which seems to be an accurate description of the unrest executions cause among convicts. Albert Pierrepoint, after a life's work of hanging men and women efficiently,and, he hoped as humanely as possible, wrote that he didn't think the death penalty was justified. As for life imprisonment being harder on murderers than hanging, well, why not?